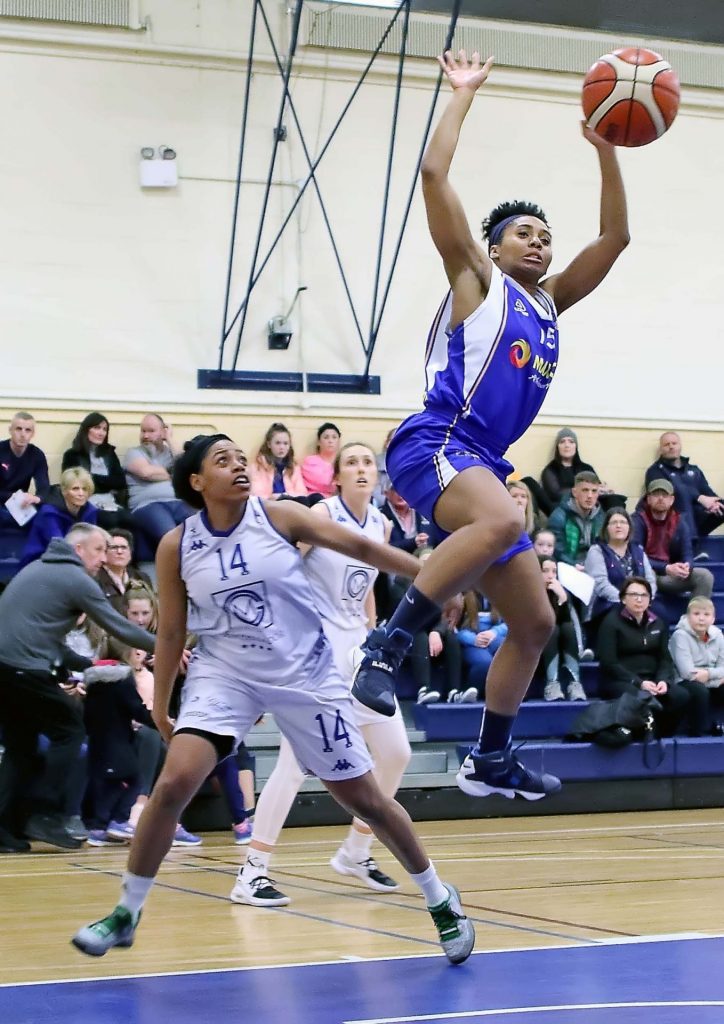 Jazz Walker was in brilliant form for the Wildcats on Saturday night as they saw off rivals Glanmire. Photo: Noel Browne.

Maxol WIT Wildcats produced the goods when needed most when they were victorious over their great Cork rivals Glanmire on Saturday night at the Mercy Sports Hall. Prior to the game, one could feel the tension as there was a serious focus from both sides in the warm up. For Wildcats it was a case of must win to stay in contention for a playoff spot while Glanmire could ill afford back to back losses that would see them slip from comfortably qualifying to fall into a group where someone has to lose out and their season finishing in the next two weeks. Right from the tip off team captain Sinead Deegan got the home side off to the perfect start when she drove up court at pace to pull up and hit a 10 foot jump shot. Straight away the home crowd showed their appreciation and you knew the real Wildcats were ready to play tonight. More scores from Steph O’Shea and Jazz Walker had Wildcats 15-10 to the good at the end of the first quarter. Indeed the difference should have been much greater but for a number of handy missed chances which would have put real doubt into the visitors minds as they struggled to stay with the pace.
The Cork side came into their own in the second quarter and were soon level (26-26) before Allysa Velles ripped the opposition net with two three pointers to leave Wildcats in front (34-28) at the half way stage.
Into the third quarter where baskets were traded until a late burst of scores from Cathy Kavanagh, O’ Shea and Walker put wildcats (55-48) ahead. A significant difference between the two teams was the enormous rebounding at both ends of the floor from Wildcats’ Kavanagh and O’Shea.
Into the final quarter where Wildcats faithful supporters were playing their part urging their team on to secure a much needed victory and they weren’t left down as in that period we saw “the Jazz Walker show.” Miss Walker was simply magnificent soaring high into the air cutting out passes and driving forward to finish with style. Helena Rohan enhanced Walker’s efforts with six unanswered points to put the result beyond doubt with just a minute to play. Glanmire’s new signing American Adela Le Randell who impressed in her first game for the Cork outfit hit the last score of the game which finished (71-56) in Wildcats favour. Note Wildcats lost by 10 points away to Brunell the previous week even though they scored 73 points. That loss was down to a lacklustre defence but lesson learned as defensively Wildcats were much better on Saturday night.

MORE CORK VISITORS
This Saturday it’s another do or die encounter for Wildcats as they face high flying Father Matthews who were promoted from Division One last season. The Cork city side made many significant signings in the off season. In particular the Dwyer sisters Grainne and Niamh from Glanmire. Indeed there are a total of five former Glanmire players added to the talent they already had in the club plus two quality Americans and gradually they have gelled into a fine team who find themselves joint second on the league table with DCU. This is Wildcats’ last home game of the season and if they can manage to up their excellent performance from last week we could be in for a nerve tingling clash where the outcome makes a massive difference to both sides. Tip off at the Mercy Sports Hall Ozanam Street is the usual time of 7pm.