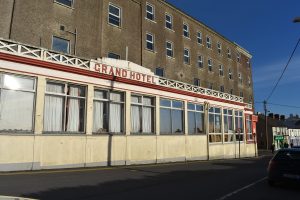 Waterford councillors have voiced opposition to the establishment of a third Direct Provision centre in Tramore, mooted for the Grand Hotel, pictured.

TWO local councillors have stated their opposition to any further Direct Provision Centres being established in Tramore, adding that more focus needs to be placed on enhancing commercial activity in the heart of the coastal town.

Independent Cllr Joe Conway and Fianna Fáil’s Eamon Quinlan both pointed to the most recent Metropolitan District Meeting where the Council confirmed that planning permission would not be required if the operator of the Grand Hotel sought to provide it to the State as another direct provision centre.

Cllr Conway told the Waterford News & Star that the two centres currently in Tramore are more than adequate and that any additional services should be distributed around the country to ensure no town is “over-burdened” by them.

“I think you would have to look long and hard for me or any other public representative to raise objections about the essential nature of the work they do. They have been admirably run and the people who inhabit them, as far as I can see, have never caused an ounce of bother. But it is on the basis of equity that I think Tramore has enough Direct Provision.”

He stated that the replacement of the hotel as an economic driver in the town is a greater requirement to Tramore than another centre.

Cllr Quinlan said that when open, the hotel “pumped out high spending tourists into the town centre on a daily basis that helped secondary businesses survive”, adding that talk of it becoming a Direct Provision centre was “a clear non-runner”.

“It would be like removing City Square out of Waterford. Provision centres have been slammed by both the UN and EU as failing their residents. On both accounts Waterford Council can secure that better path for Tramore. We must immediately move to place a Compulsory Purchase Order on the Grand Hotel, using the Urban Regeneration Fund to pay for it and adopt our recent format on integrating refugees from Syria that was very successful across Waterford rather than the outdated, inhumane provision centre model.”

Referring to an interview Cllr Conway gave on WLRFM last week, local candidate for the Green Party in the upcoming Local Elections Marc Ó Cathasaigh said he was shocked by the public representative’s comments, accusing him of “clearly scaremongering with regard to ‘rumoured’ plans” to locate a centre at the site of the hotel.

Having stated that Cllr Conway produced no evidence that any plan was afoot and criticised him for “pretty much” not allowing more refugees and asylum seekers into the country after he had suggested a “phased exit of direct provision”.

“Let’s call this what it is,” Mr Ó Cathasaigh said, “blatant electioneering designed to pander to people’s worst instincts.”

Speaking yesterday, Cllr Conway said: People who know me and who have watched me work in the community over the last 15 years know that there isn’t a scintilla of racism in me, that’s not the way I am. I’m just talking about a town that is economically in many ways on its knees and I’m trying to point it in the direction where it might be able to salvage the growth potential it has.”

He added that he would be expressing the unsuitability of a further Direct Provision centre in Tramore to the Minister for Transport Shane Ross and requesting he addresses the point to Cabinet colleague Minister for Justice Charlie Flanagan.