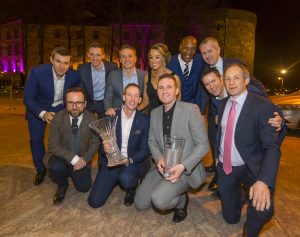 Hosted by Teresanne O’Reilly, the awards celebrated the successes and contributions of 36 companies who were shortlisted for the 13 award categories.

Mayor of Waterford City & County, Cllr Declan Doocey did the honours and announced biopharmaceutical and medical device facility Sanofi as the overall winner. Sanofi also picked up the Technology and Innovation award on the night.

Commenting after the awards, Ruth Beadle, Site Head, Sanofi Waterford, said: “We were delighted to be finalists in two categories – Excellence in Corporate Social Responsibility and Technology & Innovation – at this year’s Waterford Business Awards. It’s great recognition for the team of capable and committed people we have doing exceptional work in Waterford every day for patients around the world.

“So, we were already running well ahead of expectations when we won the Technology & Innovation award. To be named as overall Waterford Business of the Year was a huge bonus and humbling given the spread of tremendous businesses who were eligible for the top award.

“While we’ve been successful at national awards previously, it’s extra special to be recognised locally, particularly as the team who really make our site what it is have always placed a lot of emphasis on being good neighbours in Waterford. The awards are also useful in raising awareness of our site among other talented people who may be interested in joining our team as the site continues to grow and diversify,” she continued.

“The awards show the breadth and depth of businesses operating in Waterford and are a good chance to celebrate excellence in organisations of every size across different sectors. Well done and thanks to the judges, organisers and sponsors,” Ms Beadle said.

Meanwhile, the Ambassador of the Year Award was presented to Chef Paul Flynn of The Tannery Restaurant, by Ria White, EirGen Pharma.

Giving his reaction Paul said he was really surprised to win. “We are just getting on with business and as part of that we promote ourselves, and in doing so we promote Dungarvan and Waterford. We not only have to think about our own jobs, but how we do it, the level we are doing it at and how we attract people to where we are. You have to be committed and a genuine part of the community. It is great to get the recognition,” Mr Flynn said.

In his introduction Waterford Chamber CEO Gerald Hurley hailed Paul as, “One of Waterford’s most famous sons, blazing a trail in the culinary world for over three decades.” “He is passionate about local produce, his native Dungarvan and of course Waterford, using every available opportunity to promote and highlight the wonderful offering that is our home county,” Mr Hurley added.

Responding to Mr Hurley’s comments Paul said, “When you are busy you get your head down and it is not something that you think about.” He said their main aim is to make sure that their customers are happy from the moment they come they come through their doors.

Kathryn Kiely, Waterford Chamber President congratulated Sanofi and all category winners and finalists. “Without your hard work and determination our business community would not be as vibrant as it is today and we wish you all continued success.”

Speaking on behalf of WLR, Des Whelan, Managing Director, said that WLR was encouraged to see such a cross section of businesses shortlisted.