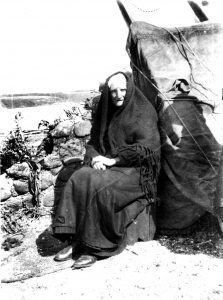 THE courageous and hardworking Cockle Woman have finally got the place in history that they deserve with the unveiling of a Blue Plaque, exhibition and a talk dedicated to them.

In a primal need to survive and support their families, women picked cockles on the banks of the river Suir from Passage to Tramore and transported them by ass and cart or on foot to Waterford city for selling. Many of the women were widowed and this was their only source of income.

Coordinator of Waterford Women’s Centre, Breda Murphy is a descendent of two cockle women – her aunt Molly and grandmother Ellie.

As members of the Women’s History Project and through her involvement in a storytelling project in Passage East and Cheekpoint, Breda has a great interest in social history and stories passed down through generations.

“During the story telling nights there were a number of stories told about the cockle women. I recalled the stories my aunt Molly had told me about her mother Ellie.”

Molly spoke of the hardship her mother endured and often felt sad about what she had to go through. Ellie’s husband died under the age of 40 leaving her with four very young children. 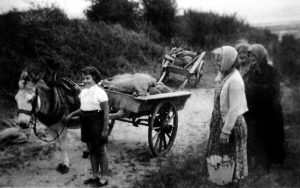 “She was already a cockle picker as a single woman. In the 1911 census she had her occupation down as cockle picker. She had a three-month-old baby – Molly – at that stage, which was remarkable at that time because it wasn’t traditional particularly for a married woman to put down her occupation,” Breda said.

Breda felt the cockle women were never recognised as a substantial part of Waterford’s history, and that’s why she proposed that they be awarded the Civic Trust Blue Plaque.

As part of the Women’s Centre Pink Plaque campaign they nominate a deserving woman or women for a Blue Plaque, which is unveiled each year on International Women’s Day. Since the plaque was unveiled on March 8 a few more names of cockle women have been identified. In Passage East there were the three Kelly sisters, Masher (Mary Cleere), Nana (Ellen Robinson) and Maggie Furlong, Katty Dwyer, Janie Organ, Ellie Murphy, Mary Ivory and Elizabeth Hearne. Some of the women’s daughters also picked cockles, including Kitty and Johanna. 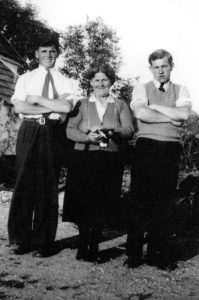 Picture of Catherine Dwyer with Dick and Joe, two of her sons.

The pride for the cockle women is ingrained through the generations. Many have contributed to the project including Maggie Furlong’s grandson John and great-grandson Sean, and Masher’s grandsons James and John. Janie Organ’s grandson and Stasia Ryan’s son Paddy Ryan provided the music at the unveiling ceremony, while Maura Power nee Robinson, granddaughter of Nana Ellen Robinson, Grainne Flanagan, great granddaughter, and Saoirse Flanagan, great great granddaughter of Katty Dwyer, unveiled the blue plaque. All in all over 40 family members attended the event.

“I’d love to hear if there are any more out there. The story is much bigger than I expected it to be,” Breda said. “Certainly from the numbers of people who came forward it is forming a big part of history.”

An exhibition called ‘Women at Work’ featuring the cockle women, which is the work of Ann Fitzgerald and Andy Kelly, continues in Central Library until March 30. The collection of photographs is being constantly updated with unseen photographs generously provided by the families of the cockle women.

Breda Murphy is the guest speaker at the Barony of Gaultier Historical Society’s March Talk tonight (Wednesday), in the Gaultier Suite, Woodlands Hotel at 8pm.