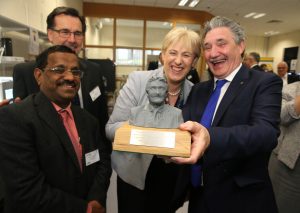 Minister for Business, Enterprise and Innovation Heather Humphreys pictured at the South-Eastern Applied Materials (SEAM) Research Centre at Waterford Institute of Technology (WIT), which is celebrating 10 years of services to industry. The Minister was joined by Minister for Training, Skills, Innovation, Research and Development, John Halligan, TD. Also pictured is on left is Dr Ramesh Raghavendra of SEAM who presented Minister Halligan with a 3D printed likeness of himself. Photo: Patrick Browne

A REGIONAL Enterprise Plan targeting up to 10,000 new jobs in Waterford and the South East, and a new 3D Additive Manufacturing Training facility, were launched in the city on Friday last.

The launch took place at the South-Eastern Applied Materials (SEAM) Research Centre at Waterford Institute of Technology (WIT), which also celebrated 10 years of services to industry.

The South East Regional Enterprise Plan identifies five strategic objectives, aiming to build a greater resilience into the South East’s economy through more clusters, increasing entrepreneurship, creating a ‘Smarter Region’ with support for the green economy, branding and marketing the South East as a place of choice for investors and talented people, and ensuring the region speaks with one voice on issues relating to critical infrastructure.

It also aims to make the South East a ‘learning region’ which responds to the skills needs of business in the region, as well as developing tourism in the region through a South East regional identity and a network of greenways, blueways and trails. The two main objectives of the original Action Plan for Jobs: to have a further 10 to 15%, which equates to 9,300 jobs new jobs by 2020; and to reduce the unemployment rate of the South East have also been carried forward.

Frank O’Regan, Chair of the broad-based regional group which created the plan, said: “These targets are ambitious, but a quick glance around the region shows the depth of economic activity already underway. Over 32,000 new jobs have been created over the past six years in the South East region; Enterprise Ireland and IDA Ireland have posted record jobs numbers in the South East for 2018; and cutting-edge companies such as Bausch + Lomb, Glanbia and MSD have committed to investing around €500 million in the region in the last six months alone.”

In officially launching the Regional Enterprise Plan, Minister Humphreys acknowledged the huge progress that has been made in the region over the past decade.

“Clearly a lot has been achieved by the businesses and entrepreneurs in this region, but I am under no illusions that we need to do even more.

“In particular, I want to see unemployment in this region fall more in line with the State average,” she said.

She said the collaboration between five Local Authorities will lead to the establishment of a new Ireland South East Development Office to support the implementation of the plan and continue to drive collaboration within the South East.

3DWIT, an initiative of SEAM (South Eastern Applied Materials) Research Centre, which will be instrumental in both training industry in new manufacturing techniques as well as providing prototype development services, was also launched.

Following the opening of its metal 3D printing centre in 2014, SEAM is now spinning out 3DWIT for the support and education of industry needs in the high potential and fast growing field of Additive Manufacturing (AM).

Minister Humphreys outlined that the project received grant funding of over €1.3 million under her Department’s Regional Enterprise Development Fund (REDF). She hoped the next 10 years would be equally as successful for SEAM.

“3DWIT will give manufacturing companies in the South East a competitive edge, and in turn will help to create jobs in many industrial sectors from biomedical devices to precision engineering and micro-electronics,” she added.

In addition to the launch of 3DWIT, SEAM also celebrated 10 years of its service to industries and the achievement of securing €1.9m Disruptive Technologies Innovation Fund funding as part of a consortium. The SEAM-led consortium comprised of two SMEs Schivo Medical & Graph Engineering, MNC Stryker Ireland and CREST-TUD. Altogether the project is worth €2.6m.

WIT President, Prof Willie Donnelly remarked on the great support from two alumni, Minister Halligan and Minister Phelan. He said it was hugely symbolic that the two launches were connected. “It is a clear statement of the central role of third level education and in particular WIT in the transformation of the regional economy over the last 10 years and its continued leadership in the delivery in the Government’s National Framework Project of Ireland 2040.”

The relationship between SEAM and the regional manufacturing sector has been instrumental in the transformation of Waterford as one of Ireland’s leading advance manufacturing regions.

“It’s worth taking a moment to reflect back on Ireland and the South East and Waterford in particular in the year in which SEAM was founded 2009.The Irish economy was at its lowest point. Unemployment in Waterford City and County was at 22%, we are now at 7% – a fantastic turnaround. Local manufacturing was struggling to remain active. Today Waterford is one of the most vibrant, advanced manufacturing network of companies in the world. These companies provide leadership in research innovation and product development. This transformation did not happen by chance, but by vision leadership, hard work and the creation of a deep collaboration network between these industries, the Institute and the agencies like Enterprise Ireland and the IDA.”

SEAM works with 185 companies across Ireland, and in the past 10 years completed more than 2,000 projects for industry.

Mayor of Waterford City and County, Cllr Declan Doocey said the contribution made by SEAM is “immeasurable”, while Minister Halligan congratulated WIT and SEAM. About 3DWIT he said, “The successful outcome of this project will help position Ireland as a key global driver in the development of medical device technologies. Initiatives like SEAM are the future of innovation, research and development in Waterford and the South East.”

Minister Phelan, acknowledged Waterford as being “the capital of our region” and “the main economic driver”. He congratulated SEAM and looks forward to seeing more collaborative initiatives emerging as a result of the Regional Plan.

“I also want to commend the five Local Authorities for their vision and commitment to enterprise in the region by supporting the newly established Ireland South East Development Office,” he said.