Delaney and two other FAI Board members voluntarily step aside 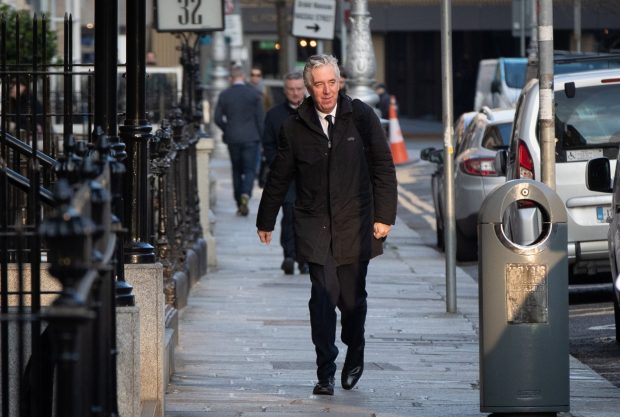 John Delaney on his way into Wednesday’s meeting with the Dáil Committee at Leinster House. Photo: Inpho.

John Delaney’s brief spell as Executive Vice-President of the FAI has ended this evening, pending the an independent investigation, as the Board of the FAI has accepted his voluntary resignation. Two other Board members, Michael Cody and Eddie Murray have also stepped away.

The full statement from the FAI reads……..

“The Board of the Football Association of Ireland met in Dublin today. Following that meeting, the sub-committee of the Board met with Executive Vice-President John Delaney.

John Delaney has offered to voluntarily step aside from carrying out his role as Executive Vice-President with immediate effect pending the completion of an independent investigation by the Association into issues of concern to the Board.

Honorary Secretary Michael Cody and Honorary Treasurer Eddie Murray have both voluntarily resigned from the Board.

The Board would like to thank Michael Cody and Eddie Murray for their long service to Irish football and wish them well after their voluntary resignations.

The meeting of the Board also mandated the sub-committee, set up to review Governance and recently publicised financial transactions, to press ahead with their work as a matter of urgency. The FAI will update Sport Ireland on all developments ahead of the meeting of the Oireachtas Committee on Sport tomorrow.

The Board of the Association wishes to assure members, football supporters and all stakeholders and sponsors that it is expediting all processes designed to restore faith in the Football Association of Ireland.

The Board acknowledges all concerns raised by stakeholders and supporters and is working to ensure that all Government funding is restored to Irish football at the earliest opportunity.”