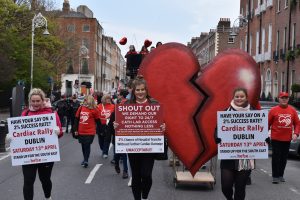 Protestors take the 24/7 cardiac campaign to the streets of Dublin.

It commenced at the Garden of Remembrance in Parnell Square at 2.15pm and finished on Merrion Square just before 4pm. At the march’s densest point, undoubtedly in the centre of O’Connell Street, there were between 500-600 people chanting the familiar mantra – ‘What do we want?’ – ‘24/7’ – ‘When do we want it?’ – ‘now!’

Unfortunately, 24/7 cardiac care doesn’t appear to be on the horizon anytime soon and part of the reason for that sobering fact, might have been revealed at Saturday’s march. Amongst the protestors were City Councillors Joe Kelly, Davy Daniels, Cha O’Neill, Eddie Mulligan, Jason Murphy, Adam Wyse, Sean Reinhardt, John Cummins and of course Matt Shanahan from HEFSE. There were no county councillors, and no sign of any councillors from any other county in the south east for that matter. TDs Mary Butler and David Cullinane were there, but as far as political weight goes, it didn’t get much heavier than that. When there are 520,000 hearts in the South East, why is it that there are very few outside Waterford City who are prepared to step on to the battle field?

As Annie McGuire – a Waterford woman living in Dublin – told the Waterford News & Star “the case has been made time and time again…why do we still have to march for this?” But march we did.

Led by piper Tony Wallace, and two shire horses, Bob and Bruno (which turned out to be a masterstroke as it ensured the march was photographed by onlookers at every step), the protestors gathered at the Garden of Remembrance, not sure how many would turn out for ‘yet another protest’. They needn’t have worried, because as it descended on O’Connell Street, there were quite enough to make the point that needed to be made.

Outside the GPO, HEFSE PRO Matt Shanahan stopped the horses and got as many people as possible to lay down on the street. It was a striking image, revealing the vulnerability of the people of the South East, but also, ironically, the fact that when it comes to fighting for emergency cardiac care, these protestors are never going to lie down.

It was then onto Merrion Square and an empty Dáil, because as Matt Shanahan put it “we’re outside an empty Dáil because the Dáil is empty on Saturdays and so is the cath lab in the South East.” 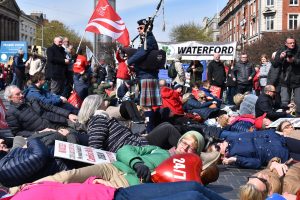 “We in HEFSE were very happy with the attendance and with the overall event which went off very well and we believe it made a sizeable impact on the streets of Dublin and to a Dublin audience,” Matt said. “Another March is being planned in Waterford for Saturday, May 18 and we hope everyone who can possibly attend will turn out. This is just a week before the local elections and an opportunity for people to show that the continuing negligence with respect to cardiac care has political consequences. The fight for 24/7 goes on.”

The effort of Matt Shanahan in particular, HEFSE, 24/7 Cardiac Cover in the South East and the local trade unions was to be commended. Placards, Shire horses, a lone piper, t-shirts, balloons and the cooperation of Dublin Gardaí – no mean feat. If this is what a very small group from Waterford city can do, imagine what could be achieved if the entire South East got involved.