“People love to knock us, but we’ll keep fighting” – Reynolds 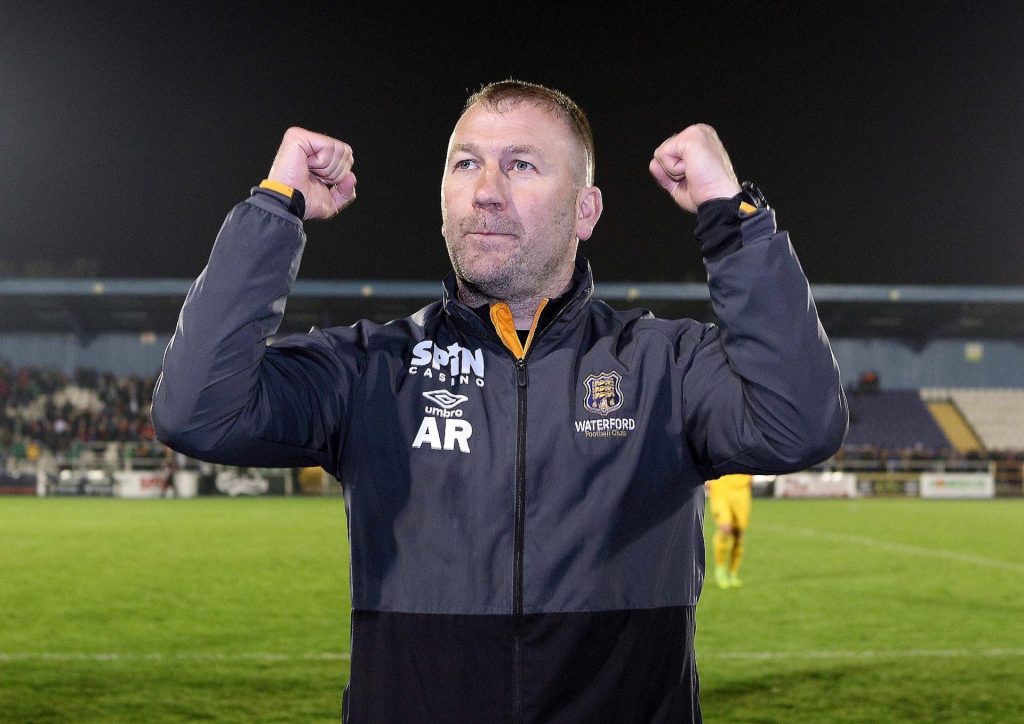 Before a ball was kicked in anger in the second Munster derby of the season on Friday night, Waterford FC manager Alan Reynolds turned to the crowd in the Old Stand and told them to lift their heads after the news that the club won’t be receiving an UEFA license to play in the Europa League this season.
He wanted the fans to get behind the team for the game against Cork City. They did just that and after a scoreless first-half, the Blues turned on the style in the second period to record a 2-0 victory that brought a smile back on the faces of the loyal faithful.
Commenting briefly on the game, Reynolds said, “I think that ranks up there as one of our best performances this season, but probably our best was against them at Turner’s Cross earlier in the year. I thought in the first half hour of the game, it was difficult enough for us and they were decent, but I think after that we took control.
“I thought in the second-half of the game, there was only one winner. We were playing a system today where we were trying to get bodies forward and I think that Mark McNulty kept them in the game. We were good on the counterattack and we set ourselves targets.
“He pulled off some great saves, but what a goal from Shane Duggan and Zack Elbouzedi. I think that big players come up in big games and they delivered tonight. Shane might have got a bit of luck, but I think it was coming because we were plying on the pressure. We dealt with their long balls I suppose.”

BLAME GAME
The Blues boss then turned his attention with great passion to the events that unfolded the day before the game against Cork. “Ah stop. I’ll still waiting for someone to come along and say look it’s going to be okay. I’m not sure where it’s going, but I’m extremely disappointed. I mean we have set a budget for the season on the back of having European money, we’d had people down looking at the ground, and have fixtures moved forward.
“I’ve brought players in on the back of playing in Europe and we were looking forward to it. It’s just gut wrenching for us. I didn’t see this coming at all. How somebody doesn’t know this before we get ten or 11 games into the season is unbelievable. It’ll be a blame game and nobody will take responsibility for it.
“I spoke to the players before the game tonight and I knew that the supporters would get behind us. We needed to give them something to shout about tonight because their hurt the same as ourselves. Really, it’s not acceptable and not good enough. I don’t know, we just have to keep going.
“We are the forgotten city and we went through it during the recession. People seem to knock us when they get a chance, but the one thing about is we keep going and we keep fighting. We’ll do the same again and we’ll bounce back. Whose to say that we won’t qualify for Europe this year?
“I’m not saying it’s over with Lee, but whose to say that we won’t go on a run and get in there to see if they can come up with something else to stop us. You could see what tonight meant to Bastien and Izzy. To be fair to the two of them, they haven’t had the best start to the season, none of us have, but they care about it.”

BRILLIANT FANS
“They are my go-to men in a situation if we’re struggling. They are the ones that will dig in and rally the troops which they did tonight. They are proud to put on a Blue jersey, you would swear that they are from Waterford, they want to win and want to do well for this club.
“I purposely went out for the warm-up tonight and I knew from that we had the support. I knew that if we could give them something to cheer about tonight that they would really get behind us and lift the roof off the place. I needed that, the players needed that and the supporters needed that.
“It doesn’t hide away the fact that we’re possibly gone out of Europe, but if we can get that support behind us, it gives us all a lift. The players that are here since last year are really hurt about it, the staff are hurt about it and so is Michael Walsh, we all fought so hard for this.
“Even yourselves are hurt. Ye were looking forward to the trip with us and mad to see us play in Europe. It’s heartbreaking to be honest. It has been a horrible 24 hours for everyone, but I’m just glad for the fans tonight that we won. It’s like a bad dream, but we’ll dust ourselves down and we won’t go away.”