Mystery of the ‘mine’ 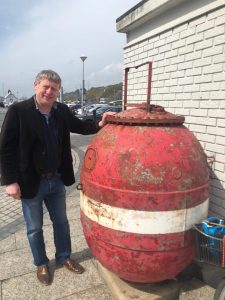 T last week’s meeting of the Metropolitan District Fianna Fáil Councillor Jason Murphy asked the executive about a large red object, situated behind the Clock Tower, that nobody seems to know much about.

“The old mine that’s behind the clock tower that apparently collects for the Shipwrecked Mariner’s Society, I don’t think it’s really used anymore,” Cllr Murphy said. “Could it be relocated and possibly put back into productive use?”

Director of Services Fergus Galvin said that he didn’t think it was a mine.

“I hope it’s not a mine anyway,” Mr Galvin said. “I think it’s a buoy that would have previously been used in the port here. It hasn’t come across our radar in the last while but we’ll have a look at it. We’ve done similar in other areas, making features out of such things so we’ll definitely come back to that.”

The Waterford News & Star consulted a local historian who revealed that it is in fact a mine, which hasn’t been used since the gentleman who looked after it died in 2009. The mine dates back to World War II (similar mine pictured here) and it is understood that the key for it had been lost for some years but ironically reappeared this week.