Gardens ‘destroyed’ by drug use 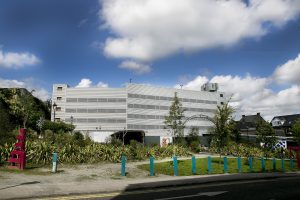 A CALL has been made to secure New Street Gardens from the public as it is being used on a daily basis by drug users, who are injecting heroin and sniffing glue and gas as well as drinking, sleeping and defecating inside the gardens.

Speaking to the Waterford News & Star, Aaron Duggan, an employee of the Senaca Group, who look after security for the closed New Street Car Park and Sullivan’s Bottle Factory, said that he has been stunned by the amount of drug use that’s been occurring in the area every single day.

“I first came into the gardens about three weeks ago and I was absolutely shocked at what I found,” Aaron said. “There was needles, included exposed ones, empty gas cylinders and literally dozens of needle kits and other heroin paraphernalia all over the gardens.”

Aaron met the Waterford News & Star last Friday to bring us on a tour of what he was finding on a daily basis in the gardens.

“The gardens were cleaned yesterday so what you see here today is only a fraction of what I’m usually finding, but as you can see, it’s still a lot,” he said.

The amount of needles, a day after a clean, was staggering. Everywhere you look there are needle kits and evidence of drug use, including multiple gas cylinders and solvents, which the users are apparently sniffing. Aaron said that it’s not uncommon for him to see between 20 and 30 people hanging around the gardens at night. 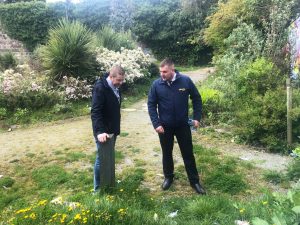 Aaron Duggan shows Waterford News & Star reporter Darren Skelton some of the evidence of drug use that he says is “all over the gardens on a daily basis”.

“They block up the gardens, in full view of the passing public, openly injecting and using drugs,” Aaron said. “I’ve lost count of the amount of times that I’ve had to advise children and parents to leave the park for their own protection. Children are constantly playing football and games in here – especially over the Easter break. In a city centre, a bit of green space like this is extremely inviting, until you see what’s inside waiting for you. They’ve absolutely destroyed the place.”

As we walked towards the top of the gardens, to a roof, which was constructed in the earlier, better days, we see a needle sticking out of the grass.

“It would be too easy for a child playing in these gardens to step on a needle like that,” Aaron said. “If you do, you‘ll need to get tested immediately and after that you have a long and nervous wait before you know if you’re okay or not. It’s absolutely disgraceful and surely the entire gardens need to be closed off from the public now.”

Image shows a needle protruding from the grass in New Street Gardens where children are playing on a regular basis.

Several feet away is an empty needle box, which is supposed to be used by drug users to return their dirty needles to the chemist. There are many of these boxes strewn over the gardens, indicating that they are rarely used.

The Waterford News & Star contacted Waterford City & County Council to see who was responsible for the gardens – whether it was themselves or NAMA. No reply was received at the time of going to print.

The Waterford News & Star spoke to local businessman, and chairperson of the Apple Market Trust, Bryan Tynan who said that he was “aware of the drug use in the area”.

“It’s hard to miss what’s going on up there but it hasn’t impacted the High Street as its being contained in that area,” Mr Tynan said. “Myself and other businesses in the area have received reports from members of the public and we have passed them on to Councillor Eddie Mulligan who has been extremely vocal to council and Gardaí about drug use in the city.”