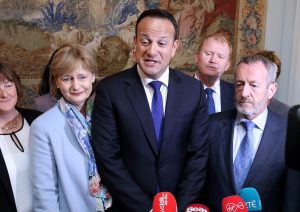 AFTER publicly questioning the contents of a desperate letter by four UHW pathologists, which received unprecedented national coverage over the last fortnight, Taoiseach Leo Varadkar has now apologised, saying “this is one that I got wrong”.

On Saturday the Taoiseach rolled back on the statements he had made at various times over the last week.

“Last week when I was asked about the Waterford mortuary, there were conflicting accounts. On the one hand, a letter from four consultants making deeply disturbing claims about conditions in the mortuary and on the other hand, a statement from hospital management saying there was no evidence or supporting complaints to back up the claims,” the Taoiseach said in a statement.

“I did not want to jump to conclusions or to side with one group or staff against another without knowing facts or before an investigation was carried out. That’s why I said that I did not know if the claims were true or not.”

The Taoiseach was then made aware of complaints that the hospital received, which backed up the claims of the pathologists and made him regret taking such an early, and shocking stance on the issue.

“Over the course of the week, corroborating statements have come to light and complaints have been made that I believe support the views expressed by the four consultants. This is one I got wrong,” he acknowledged. “I want to apologise unreservedly to anyone who feels that I did not treat this issue with the seriousness or sensitivity it deserved.

“As I have said before, my over-riding concern is for the dignity of patients in life and in death. It has never been in dispute that the mortuary is sub-standard and needs to be replaced. Planning permission has been granted for a new one and I am assured that it will go to tender and construction this year. In the interim, temporary measures are being put in place.”

The Taoiseach said that he had been briefed by the South South West Hospital Group (SSWHG), who had released a statement last Monday evening, April 29, casting a shadow of doubt over the letter, which was sent by the pathologists in October 2018. The Waterford News & Star has issued a question to the SSWHG requesting a statement from them in light of new evidence and the Taoiseach’s apology. No reply was received at the time of going to press.

Meanwhile, Sinn Fein TD David Cullinane welcomed the Taoiseach’s apology, but added that the hospital group would “have to be held accountable”.

“I welcome the Taoiseach’s unreserved apology, but he should never have made the comments in the first place,” Deputy Cullinane said. “He must now follow this apology with action. This must involve following through on commitments to build a new mortuary as a matter of urgency. The South/Southwest Hospital group must also account for their failure to act. They received a letter from four pathologists in October last year and they failed to respond until March of this year.

They also failed to investigate the claims and it was only when the story broke that they examined records at the mortuary. This is unacceptable. The hospital group have questions to answer and must appear before the Health committee.”

Deputy Cullinane added that the Government must “commence a full independent investigation into the claims made and ensure that the hospital group and management appear before the Oireachtas without delay”.

“The full facts surrounding this controversy must be established,” he said. “Families who have lost loved ones in Waterford and the South East deserve nothing less.”