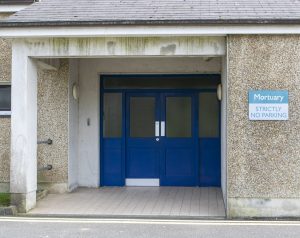 The mortuary at University Hospital Waterford.

TWO new body refrigeration units were delivered to the mortuary at the weekend, increasing the amount of body space in the building by seven. The South South West Hospital Group had announced that mobile refrigeration units would be put in place at the mortuary but according to a source in the hospital, this contingency “would never have worked”.
“The mobile refrigeration units would have meant that bodies would have had to be transferred in and out of the building, and that would never have been appropriate,” they said.
The new units – one with space for three bodies and the other for four – are the first of the HSE’s three step contingency plan for the mortuary. The next, expected in the next eight weeks, is an extension to the current mortuary building. Last week, Minister Simon Harris said that the new building has been given “the absolute go ahead” and will receive funding in the yet-to-be-published Capital Plan. This, a UHW source says, is the only solution that will rectify this situation.
“The extra space in the mortuary will be welcome, although where they are going to have to keep the refrigeration units will not be ideal,” the source said. “Due to well publicised space constraints within the building itself it will more than likely have to be placed in an area in, or very close by public areas. This is not ideal but what is more concerning to staff is the health and safety risks that remain in the post mortem unit. These risks will only be alleviated by a completely new building.”

State cases
Meanwhile, the State Pathologists office has said that all bodies involved in state cases will continue to be averted away from University Hospital Waterford until the situation improves considerably, which is not expected to be until the new mortuary is built.