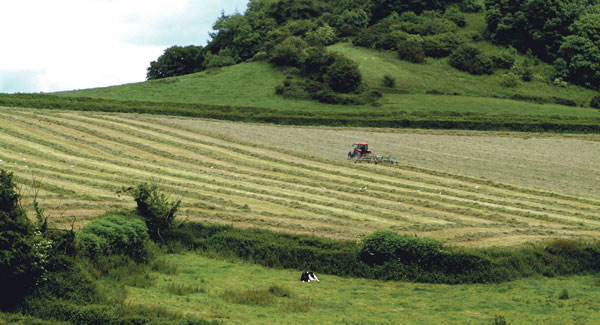 Food and farming bodies have defended their role in climate action and warned it is simplistic to talk of slashing herd numbers or swapping pasture for tillage.

Karl Richards, senior researcher with Teagasc said the reality was that, despite the high levels of greenhouse gas emissions from the sector, market demand for dairy and beef was growing and Ireland was the cleanest producer in Europe.

“At the moment, our plan is to do that as efficiently as possible and to have the lowest carbon footprint for our product,” he said.

“Uniquely in Ireland 90% of our utilisable agricultural area is grassland so we are in the perverse situation that if we were to start to generate more crops, we would be ploughing up permanent grassland which is a net carbon sink and turning that into a net carbon source.

There are no simple answers to this and the long term effects of changing agricultural production and land use needs to be carefully considered.

Mr Richards was speaking at the Environmental Protection Agency’s Climate Action Conference against a backdrop where agriculture is responsible for 33% of the country’s greenhouse gas emissions and the Oireachtas Climate Action Committee has called for an immediate review of land-use.

Bill Callanan, chief environmental inspector at the Department of Agriculture and Food, also cautioned that change in the sector would be challenging.

“When you’re 33% of the challenge, it’s unavoidable that you have to be a significant part of the solution,” he said.

“It will not be solely by simple reductions. The story for agriculture is a lot more complicated. When you change to an electric car, you’ve done the transition and it’s pretty much plain sailing after that. We haven’t come up with an electric cow yet.”

Agricultural economist Tom Arnold said there was much good work going on in agriculture in terms of reducing emissions per unit of output but he added: “There is a core uncomfortable reality that if the emissions from the agri sector are increasing in absolute terms and as a proportion of the national total, the sector is going to come under increasing pressure.“

One of the greatest threats to us being successful is to see divisions open up in our society and there are real dangers of that. Sometimes agriculture feels it is in particular pointed at as being to blame in some sense and we can not allow this – setting one part of our community against another – or we will fail.

Marie Donnelly, former director for renewables at the European Commission, said the glaring omission in Ireland was solar power.

“For the technology that is considered the cheapest technology globally, it does not exist in this country.”

She dismissed ESB arguments that it was more expensive to buy excess power from households solar panels than for the company to produce it by other means. She said the public were not demanding set prices. “You tell them you’ll buy it at wholesale prices and if the wholesale price is zero, you get zero and if the price is high, you make money. People will accept that.”