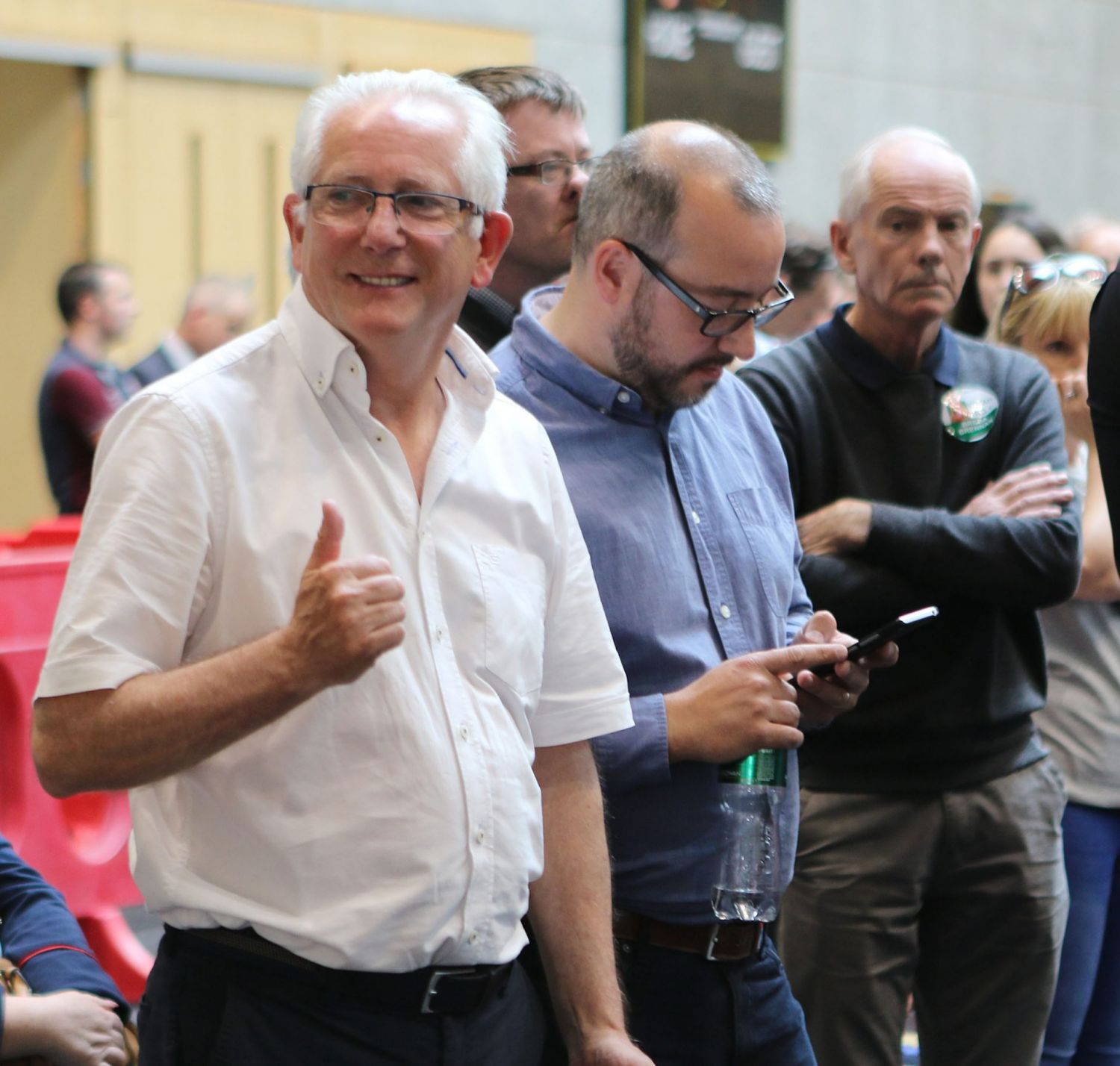 Update 12.15am: Count finishes in Waterford with the election of Sinn Fein’s Jim Griffin and Eamon Quinlan for Fianna Fail without reaching the quota in the Tramore – City West area. 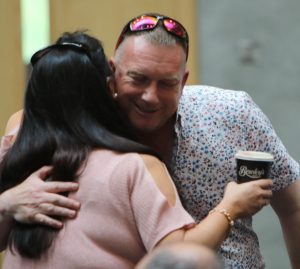 Update 11.35pm: Sinn Féin’s Declan Clune has taken the final seat in the Portlaw-Kilmacthomas District after a long and tiring day at the count centre at WIT Arena. 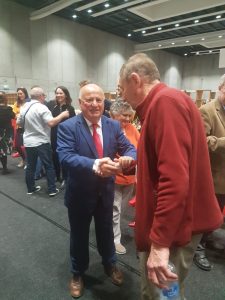 Ger Barron being congratulated on his election.

Update 10.47pm: Ger Barron (Lab) has returned to his councillor roots after taking the fourth seat in the Portlaw-Kilmacthomas District.

Update 10.19pm: The first of the Metropolitan Districts has been completed, with Jason Murphy (FF), Seamus Ryan (LAB) and Breda Brennan all elected after the 10th Count. 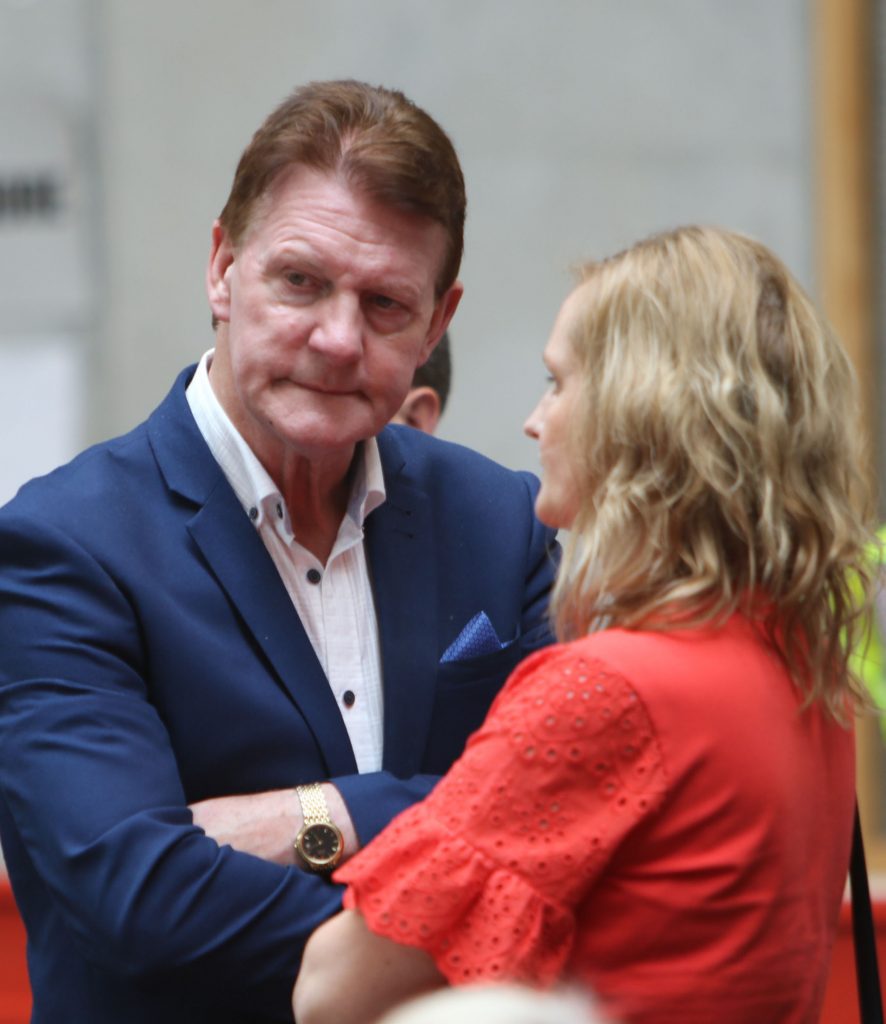 Update 9.40pm: Half the seats in the Waterford City South have now been filled with Independent Donal Barry and Fine Gael’s John Cummins joining poll-topper John Hearne after Count 9. The writing looks on the wall for Cha O’Neill, a councillor since 1999, who trails Breda Brennan by 79 votes in the chase for the final seat. Labour’s Seamus Ryan should reclaim the seat he lost five years ago.

Updated 9.31 pm: Fine Gael’s Lola O’Sullivan elected. Michael Gallwey of Renua is eliminated and his 273 votes are now being distributed.

Update 6.13pm: Sean Reinhardt becomes the first casualty of the previous Council having been eliminated on the sixth count in the Waterford City South ward. The Independent had received just 5.6% of the first preference votes on offer. 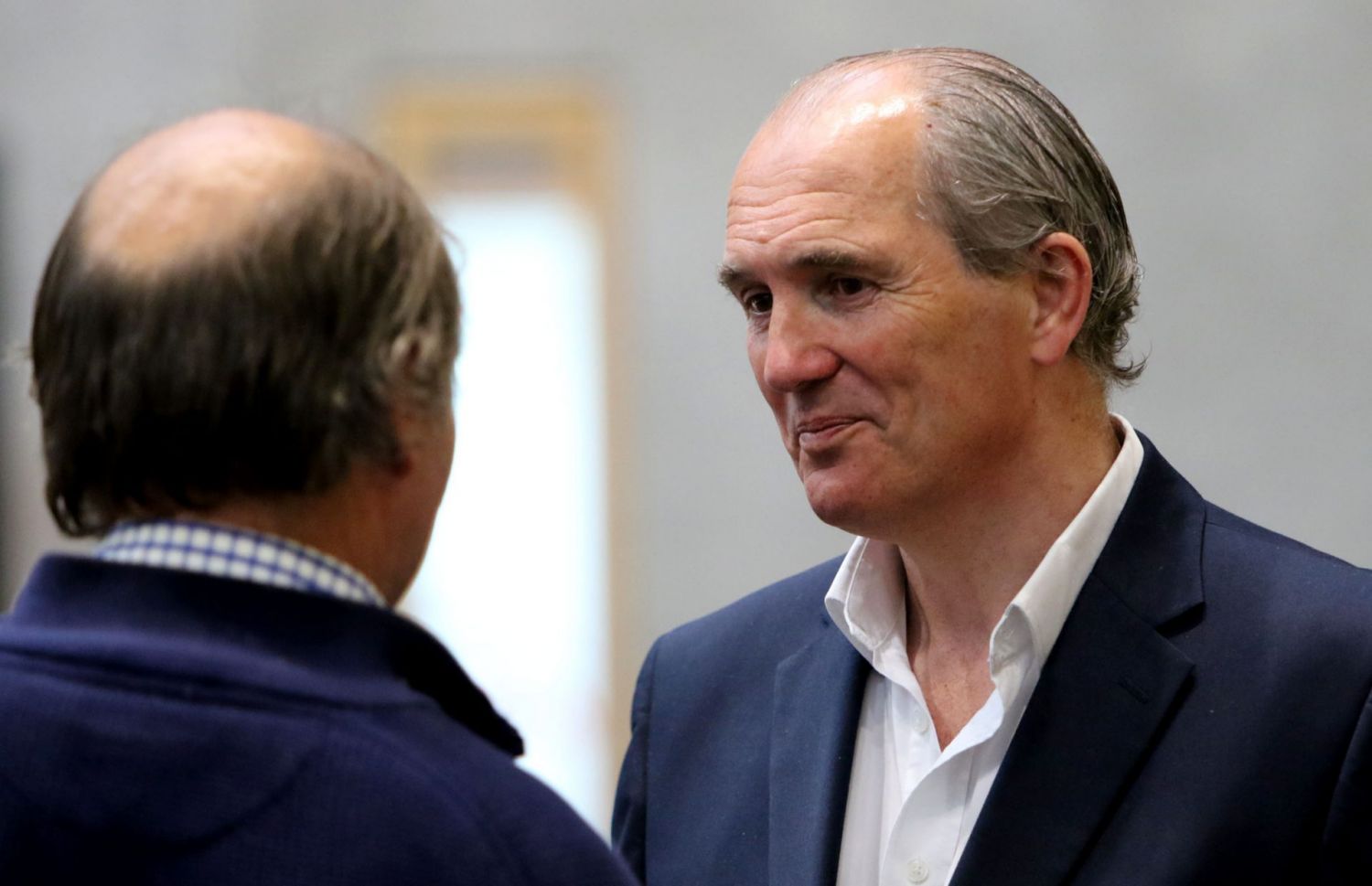 Matt Shanahan topped the poll in Waterford City East with 20.3% of the first preference votes.

Matt Shanahan topped the poll in Waterford City East with 20.3% of the first preference votes

Update 17.50: Health campaigner Matt Shanahan easily surpassed the quota in the Waterford City East District, sending a strong message that the public’s priority remains the need for improved healthcare, particularly 24/7 cardiac care at University Hospital Waterford. Shanahan, who was co-opted onto the Council earlier this year by the departing Mary Roche, received 20.3% of the first preference votes in the ward.

Update 17:41: Tom Cronin of Fianna Fail is the second to be elected in Dungarvan with 1234 votes.

Update 15:37: Waterford City and County Mayor Declan Doocey has taken the third and final seat in the Lismore district. He was elected on the second count with 1,205 votes. 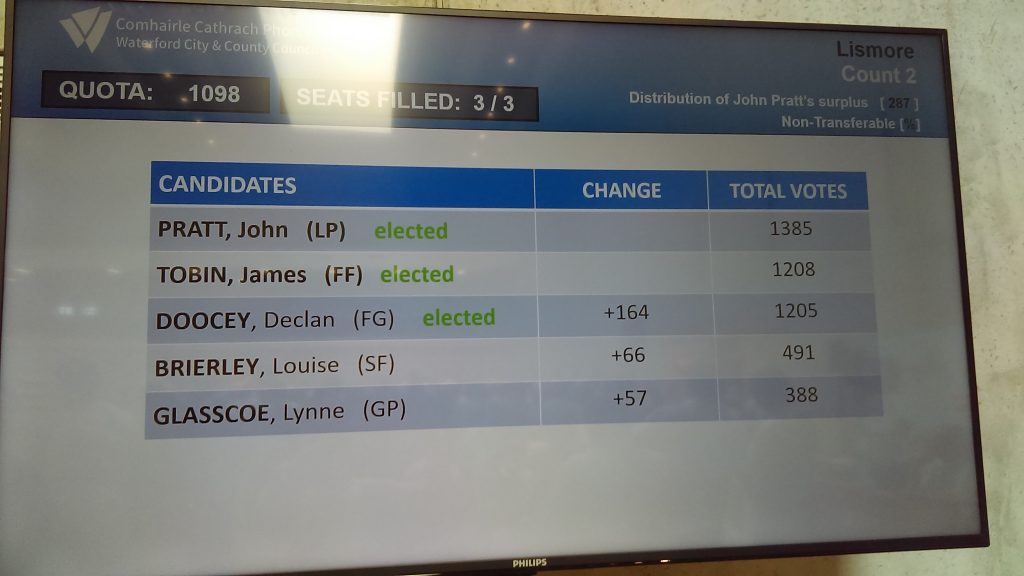 The final results for the three-seater Lismore District, with Pratt, Tobin and Doocey elected. 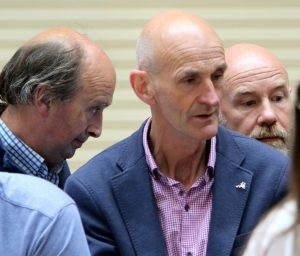 Update 15.13pm: Fine Gael’s Liam Brazil and Seanie Power surged ahead of the rest to become the first candidates to be elected in the newly named Portlaw-Kilmacthomas district.

Portlaw-Kilmacthomas district was originally the six seat Comeragh District, which was renamed and reduced by one seat.

From the outset tally figures showed that both Brazil and Power were streets in front. Seanie, who topped the first preference votes secured 90% of the votes in two boots in the district, came out on top with 1,591 first preference votes. Meanwhile, Liam secured his seat with 1,482. Giving his reaction, Seanie said he was over the moon. “I’ve increased my vote massively from 900 to over 1,500. I’m overwhelmed to be honest with you.” A humble man by nature, Mr Power said he was living in hope of topping the polls before the results were announced.

Update 14:40: Sinn Fein’s John Hearne is the first Councillor elected in Waterford City South with 1071 first preference votes. Sinn Fein ran three candidates in this ward and it’s looking very likely that only John will make it (Breda Brennan 444, Warren Fitzgerald 312). The celebrations of Hearne were a lot more understated than five years ago due to the underlying disappointment in the Sinn Fein camp. Speaking to the Waterford News & Star, John said that the “working class didn’t come out to vote this year”. 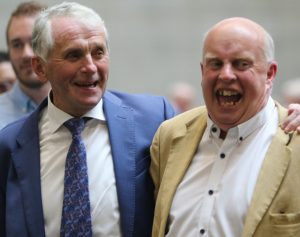 Update 13.34: CHEERS echoed through the count centre as two longstanding councillors became the first to be elected for Waterford this afternoon after coming over the quota in the first count.

Giving his reaction to his re-election John Pratt said he was delighted and overwhelmed. “It means so much to me that the people came out and voted for me for doing the work that I did representing them over the past five years.”

Update 11.40am: Grace O’Sullivan with her sister Lola at the count centre in Waterford. Grace speaks to Marion O’Mara about her hopes of becoming Waterford’s first ever MEP.

Update 10.32am: Doubtful votes in Lismore electoral area now been adjudicated on. Expect result within the next hour. Pratt, Tobin and Doocey to be returned to Waterford Council.

Update 8.57am: Counting is set to commence at 9am at WIT Arena on Waterford’s local elections. The first results are expected to come from the Lismore Electoral Area. Without a vote being counted yesterday, tally figures showed that the three sitting councillors, Declan Doocey (FG), John Pratt (Lab) and James Tobin (FF) should be returned with ease in this newly revised three-seater district. 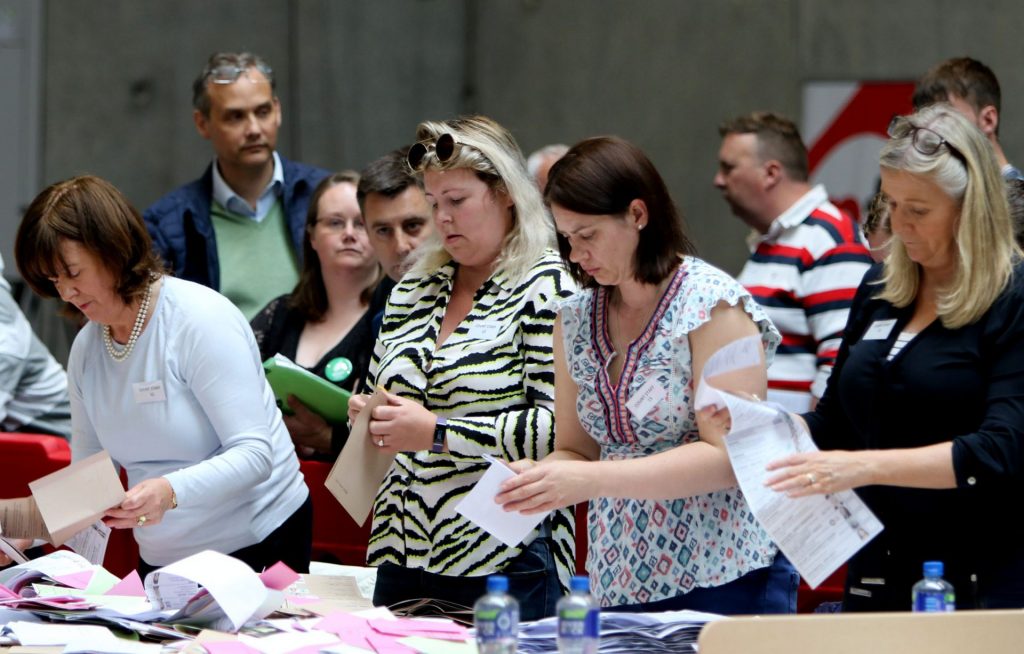