“Nobody was feeling sorry for themselves” – Kearney 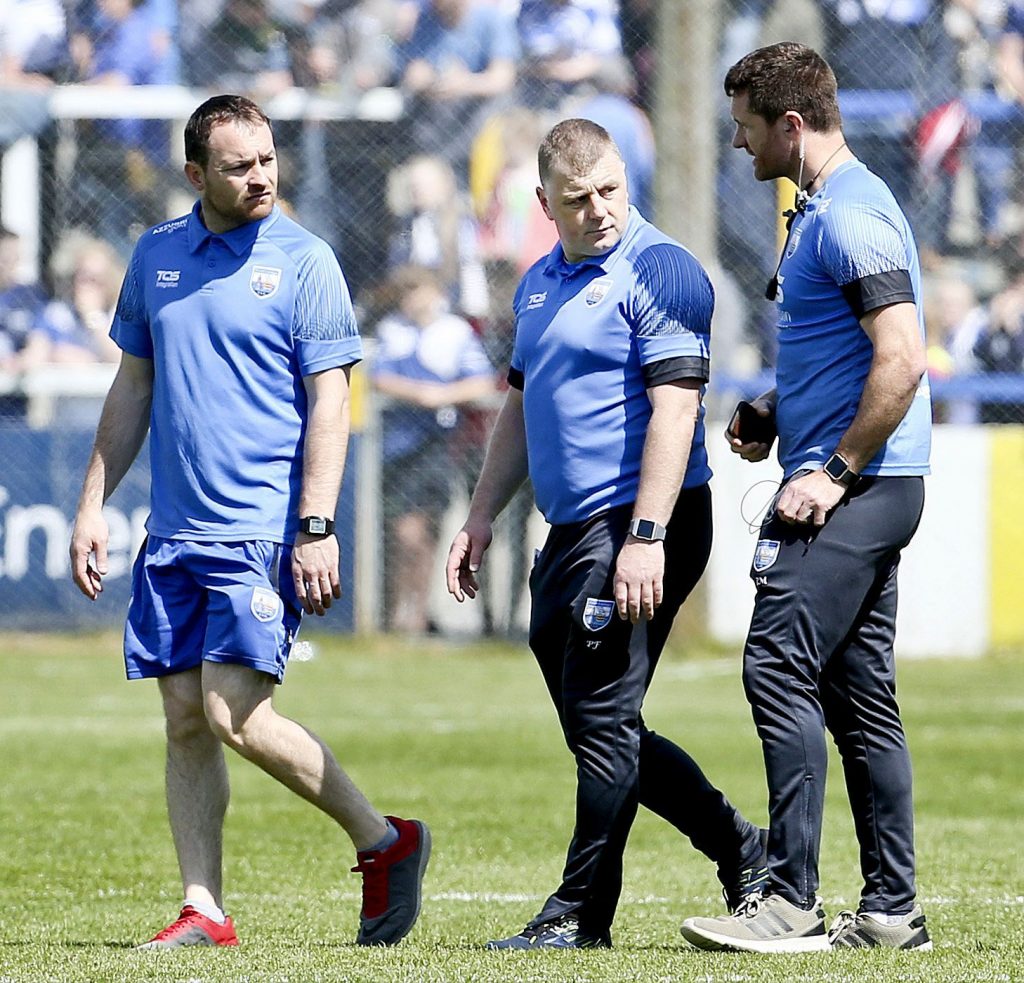 Pa Kearney (left) was delighted with the reaction from the Waterford players since the Tipp game. Everyone is moving on and looking forward to the Limerick game. Here he was during the Clare game with manager Paraic Fanning and fellow selector, James Murray. Photo: Sean Byrne.

Pa Kearney admitted that last week was the most difficult since he signed up to be a selector with the Waterford hurlers.
“Initially, it was. Sunday evening, straight away after the game, and going into Monday, everybody was a bit down. We spoke to a few of the lads and we were back on the field on Wednesday night. Everybody involved in the set-up had a very positive attitude.”
In a trying time, the response of the players on the training ground last week was reassuring for the management team. “We spoke to a few of them on Monday and Tuesday. They understood where we were coming from. Everybody was eager to get back on the field and look towards Limerick. It was a very positive session by everyone. That was really great to see. Nobody was feeling sorry for themselves. Nobody was dwelling on Sunday. Everybody was moving on and looking towards Limerick. That’s all we wanted.”

VIDEO NASTY
Kearney and company had the unenviable task of poring over the video nasty from Thurles. “I got time to look at it that evening. We had a look again as a management team on Tuesday night. There was a lot of aspects we were happy with. Hurling is a strange game. One or two mistakes and one or two things happening for Tipp. They had sixteen scores from nineteen shots in the first half. It was like what Galway did to us two years ago. There was nothing going wide for the them, everything was going right. We were happy with where we were at half time. As you saw, the lads came out in the second half and had a right cut off it. That goal was the killer blow. Who knows what would have happened if we stayed in the game.”
A few positives did emerge during the course of that analysis. “We were happy with a few of the new lads in the team. They played well. We used the ball quite well at times. The final ball or the final pass mightn’t have always come off for us. That final pass can make an awful difference. The attitude of the lads when they were behind at half time to come out and attack the game again. We were very happy with all that.”

100 SECONDS IN FRONT
Amazingly, Waterford have only been ahead for a hundred seconds in this year’s Munster championship. When Austin Gleeson pointed in the first minute of the first game against Clare. Another element Kearney is looking to address when Limerick land on their doorstep on Sunday. “We have been chasing it, there’s definitely an element of that. It’s hard to put your finger on what causes that. Hopefully the next day we can start a bit brighter and be ahead or be level or be within a point or two for a longer period of time.”
He hasn’t given up hope on a top three finish. Four points still might do the trick. “It’s a possibility. There’s numerous ways it can go yet. All we know is that we must beat Limerick on Sunday. Then we if do that, we must go on and beat Cork. We can’t control anything else outside of that. For us, it’s looking towards Sunday and beating Limerick is our main objective at the moment.”

MAHONY OUT
They will have to plan without Philip Mahony for the rest of the provincial series due to a broken tibia. His second leg break in five years. “Philip is obviously an awful loss. He’s an established player in the half back line for Waterford now. Unfortunately, that’s part of sport. No one knows, on any given day, what can happen. Unfortunately, Philip suffered the break but Philip will be right behind the lads. He was there at training and pushing everyone on. He will be with us for the next few weeks. Please God we can get through and Philip might be back on the pitch come the end of the summer. That’s what we’re all hoping for.”
The former Déise hurler cut his teeth as a trainer with his native Ballyduff Upper along with Modeligo, Ballysaggart and Erin’s Own in Cork before Paraic Fanning put in the call. He has noticed a heavier workload since joining the inter county set-up. “You’re dealing with 35 lads that have a chance of playing and the time that’s involved as well. It’s a major step-up. You don’t go at it unless you know what’s ahead of you. I’m thoroughly enjoying it. I can’t ask for anything else from the lads I’m involved with. The 35 lads we have are pushing every week. No hassle with any of them. They all just want to do good for Waterford, that’s why we’re all there.”