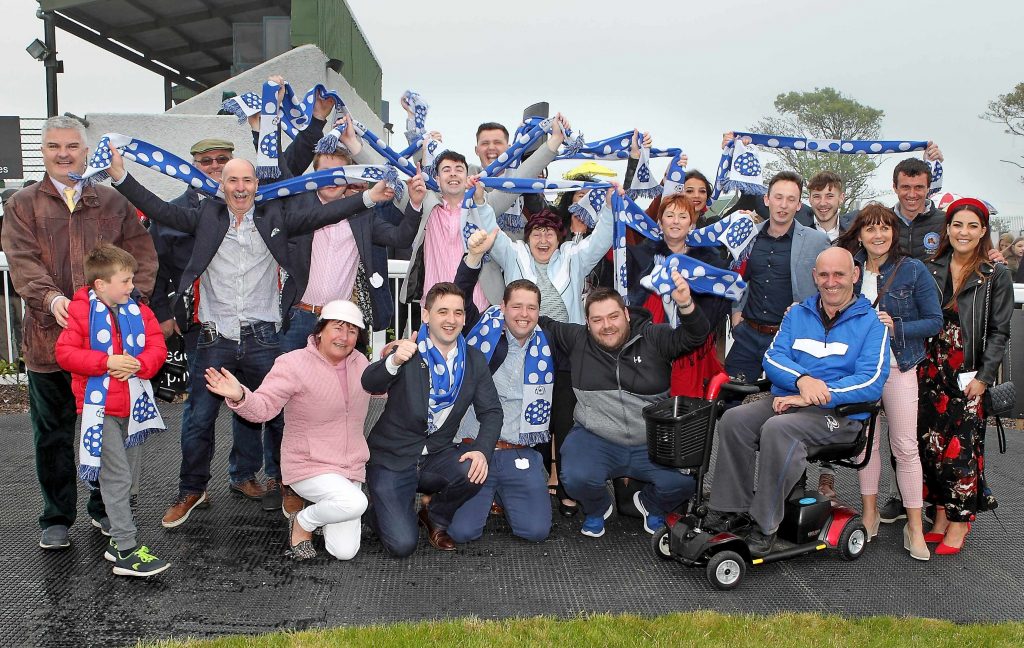 Members of the local Miracle Cure Syndicate whose horse Colenso, trained by Pat Flavin and ridden by Danny Mullins won the Tom Murphy Mercedes Benz E-Class Handicap Hurdle are overjoyed with their win at the Tramore Races on Friday night. Photo: Noel Browne.

Local Winners this week….
Fairyhouse – Sleepy Head was a 6/1 winner for Pat Flynn.
Tramore – Megalomaniac was a 5/4 winner for Henry De Bromhead while Colenso 7/2 recorded a hat trick of victories for The Miracle Cure Syndicate and Tramore trainers Pat and John Flavin.
Worcester – Hillview Lad was a 25/1 winner for Sean Houlihan.
Kilbeggan – Henry De Bromhead sent out 10/1 shot Cavalry Man to an easy success.
Ballingarry Point – Cronins Hill was a nice winner for James Hannon.
Kinsale Point – The Kiely brothers, Tom, Paul and Richie enjoyed a smashing double with Chenery and Thedancingfarrier.

Did You Know?​
County Armagh based Marshall Watson will take over the training licence from his dad Keith next year.
Park racing ceased at Tralee racecourse in 2008 but the venue still stages point to point action.
Irish jump jockey Johnny Allen who moved to Australia now rides as a flat jockey down under and has seven Group one victories to his name.
When Terebellum scored at Goodwood it meant that trainer John Gosden and jockey Frankie Dettori registered their 500th success together.
At 6 ft 7 inches Patrick Sankey must be the tallest jockey in the world. He recently registered his first ever success guiding the 14 year old Galbally King to victory at a Point in the Welsh borders. Incidentally his mount was due to carry 12 stone but the horse won despite carrying 12 stone 10 pounds the jockey having put up 10 pounds overweight.
Well known English man George Formby was once a stable boy/jockey before he went into the music business becoming famous playing his ukulele.
Former flat apprentice Jamie Hamblet (31) who worked as an apprentice jockey for Sir Michael Stoute and John Gosden is now a member of boy band Union J. His brother Ashley is still a jockey while his dad Paul is a former jockey.

Injured Riders
Danny Cook damaged his shoulder after his foot came out of the stirrup and was unseated when bang in contention on Eyes Of The Tiger in the closing stages of a Cartmel race. Despite putting out his right shoulder jumping the last flight of hurdles Cathal Landers still managed to steer Brogine to victory at Limerick.
Liam Gilligan dislocated his shoulder at Fontwell while Evan Daly broke a collarbone in Tramore.

Young French Jockey Dies
French apprentice Romane Brizard (21) died having failed to recover from a four horse pile up at a meeting in the West of France.

Another Trainer Quits
Mark Brisbourne is the latest to quit the UK training ranks. The yard which he trains out of is being sold. He trained 560 winners (534 flat and 26 NH). At one stage he trained 94 horses but was now down to 12.

Wicklow The Brave
When Wicklow Brave obliged over fences at Ballinrobe it marked a 15th career win. He has six wins on the flat, five over hurdles, three in bumpers and one in a chase.

Norman The Brave
Galway based Norman Lee who enjoyed a nice double at Ballinrobe has 15 horses to run during the summer but when winter arrives this rises to 30.