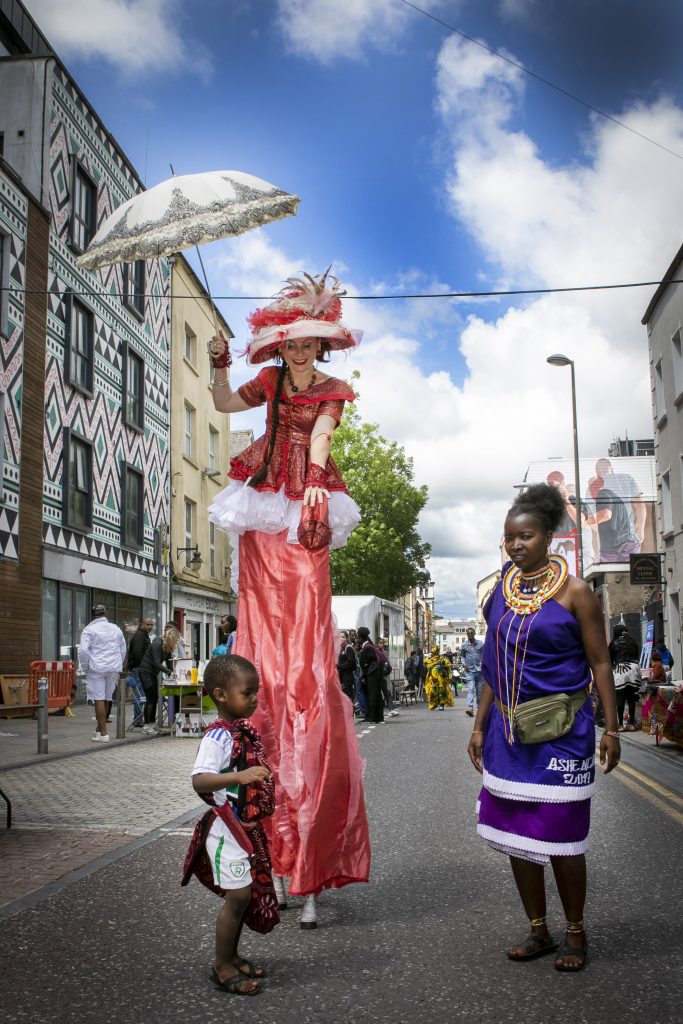 Elkanah and Anna Nyangasi at Africa Day in Waterford City’s Cultural Quarter, which was praised in the most recent Irish Business Against Litter (IBAL) survey. Photo: Joe Evans

DESPITE retaining the title of Ireland’s cleanest city, Waterford has dropped from 10th place to 16th overall in a ranking of 40 towns and cities nationwide.

The latest litter survey by business group Irish Business Against Litter (IBAL) also showed that Ballybeg failed to retain its Clean status and is now “moderately littered” in 34th place.

The An Taisce report for Waterford City stated that: “Again our cleanest city, Waterford deserves much praise. Plunkett Train Station deserves a special mention for the overall presentation and maintenance of the exterior environment – mural, plaques and planting are lovely.”

The judges described the ‘Cultural Quarter’, which formed centre stage for Africa Day in Waterford city last week, as an excellent environment “in terms of both overall presentation and litter”. “It was spotless throughout. The Mall, Barronstrand Street, Hanover Street and George’s Street were also all top ranking.”

The report said the People’s Park was a wonderful site – clearly it is a much respected and cared for environment.”

However, it wasn’t all positive news as New Street Community Garden was by far the most heavily littered site surveyed in Waterford city. “This beautifully laid out ‘pocket park’ in the centre of the city has been very poorly respected, to the extent that it would be unpleasant to sit and enjoy. It wasn’t just littered but subjected to dumping e.g. duvet and clothing items. Where does responsibility for this site lie?” New Street Gardens was given a D+ grade as it had “been allowed to deteriorate to a terrible state”.

Bus Eireann Bus Depot and the bottle / clothing bank directly outside were both described as very poor, and classified as Grade C sites.

The report went on to say the ‘Waterford Walls’ initiative was worth noting. “It has added some welcome colour in otherwise run down / bleak environments, with the added bonus of adding some art throughout the city.”

Thomas Hill just missed out on a top grade, due to food related litter under cars.

Meanwhile, the An Taisce report for Ballybeg stated: “Ballybeg’s result suffered due to two litter blackspots. The Horticultural Project Initiative (subject to long-term dumping e.g. mattresses and bedding) and an area beside the GAA Club both need attention as they will only encourage further dumping.”

Regarding the Ballybeg Community Development Project the report stated, “The buildings and grounds of this community project were in good order and well maintained. Grass, planted areas, paving and railings were in very good condition. It was excellent with regard to litter.”

It also cited the “house proud residents” of Glencarra. “There was a complete absence of litter throughout the area surveyed and the cut grass was pristine.” Also earning a grade A was Priory Lawn as all public and private areas of this residential area were “impeccable”.