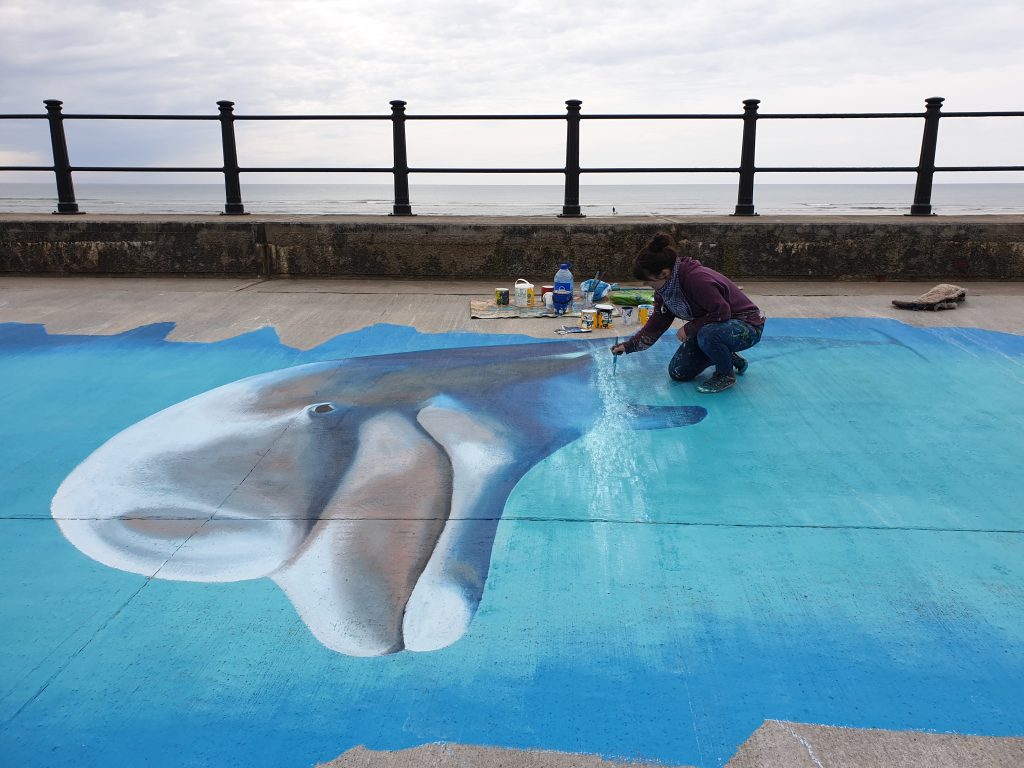 IT’S May and the sun has put his morning hat on for the Tramore Promenaders. For those in the know, it’s a casual saunter amongst, well, those in the know. Because everyone seems to know everyone else. Mostly retirees. But this time, there’s something pretty unusual in the mix. There’s a talented artist at work here on the promenade floor. Gorey’s Lisa Murphy who tells me that she’s been a blaa for the last twenty years.  Sketching, blocking out, outlining, mixing colours and answering the many questions that are coming her way and thanking the well-wishers for their interest… “I love talking to people… encouraging… interacting… appreciating… it’s what it’s all about really,” says Lisa.

Performance art in an accidental street-stage that draws everyone into the artistic experience. There’s redemption at work here. And healing.  Because a number of the watchers are in extremis – recovering from operations or awaiting one. Like me. And artistic experiences such as this are therapeutic and spirit-lifting because, as Lisa says, “a picture is a gift from the artist to the community”. 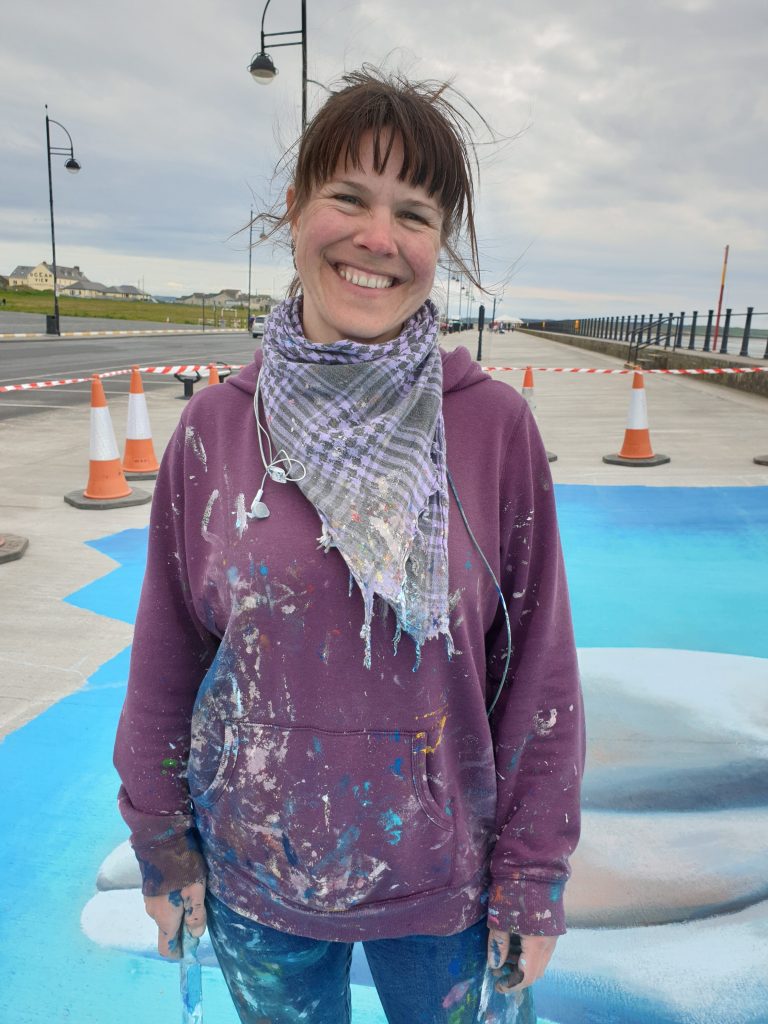 Like everyone, I’m fascinated by the process. And the mystery of the girl in the dungarees that carry the imprint of many canvasses and walls who beams smiles to all and sundry. Every day I come to see just what’s happened in the last 24 fours. At first, it’s a pool of ocean blue that etches and extends itself in a seemingly casual outline on the promenade floor. Next day deeper shades of blue sink into the picture along with an imagined sea floor of orange coral and green weed.

And now the dolphin starts to take shape. Bottle-nosed, ear-conscious, dorsal-diving, face-friendly toothy-grinning mariner’s friend. This chap has a character all of his own and is going to be a winning feature on this year’s prom. And guess what? Next day hasn’t he just gone and got friends! Golden fish that float above, below and alongside him in his watery garden of blue.

The work is commissioned by Tramore Tidy Towns and Waterford Council with the theme of making Tramore beach a clean playground for young and old.  It’s a sort of triptych narrative with two more promenade-floor murals to follow. One depicts left-behind beach-litter and another paints the efforts of volunteers to clean up afterwards.  Taken together the pictures represent the what-is and what-could-be if we all band together for the sake of the environment and for ourselves. And the generations that will follow us who will all use the beach, as all the generations before us have, because such things are in our care as we pass through.

Lisa Murphy is creature-creator in this accidental performance art experience. I know because I summon up the courage to ask her. Originally from Gorey and inspired by her art teacher Eamonn Carter, Lisa has studied at Ballyfermot Art College and later at D.I.T. and has an exhibition currently hanging at Loco Restaurant beside Ardkeen Shopping Centre. She’s leading a walls project with five Transition year classes in Loreto, Wexford and also teaches some special needs classes elsewhere which she loves. She’s been doing walls now for some twenty years and also works with Spraoi… “they build it and I paint it”. She’s getting married at the end of the summer to Gavin who’s got a band with the intriguing title of 100 Mornings.  “I can’t wait,” says Lisa.

I just love what this Wexford-born artist is doing. I’m fascinated at the process of the creation of a work of art on a beach promenade that has been sitting here for over a hundred years and has just been waiting for somebody like Lisa. It’s painted with love and suffused with a deep feeling for community and local lore and legend.

No one ever thought of this until Lisa came along. With her paints and her brushes and splattered dungarees and her talent and her imagination. And her welcome as broad as the bay that inspires her. And her pride at seeing her work appreciated as the promenaders stop to watch, to wonder and to be dazzled. And to compliment the girl in the paint-splattered dungarees whose smile matches the dolphin’s.

Maybe that’s where he got his dancing eyes.