View from the Green Room: John B. Keane’s magnificent Matchmaker 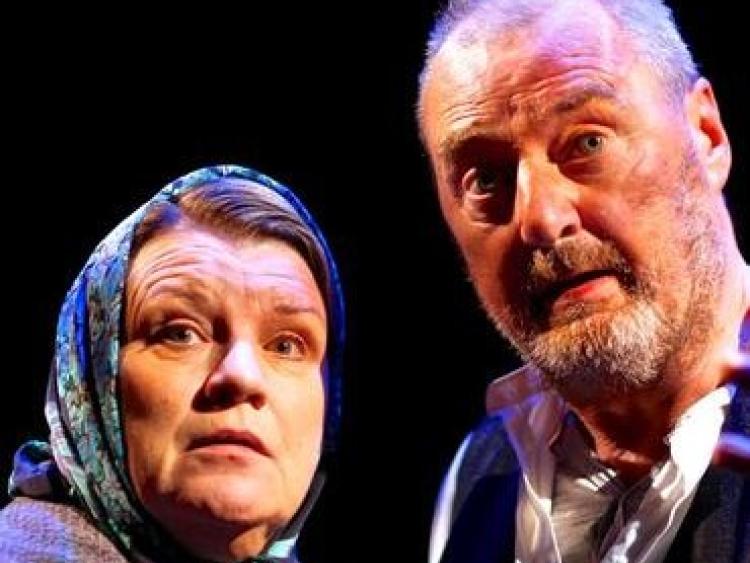 Mary McEvoy and Jon Kenny in The Matchmaker at the Theatre Royal.

When the audience finishes your catchphrase signature, you know you’ve got them in the palm of your hand. There are moments when the audience interrupts the flow of the play with bursts of applause and the spontaneous ovation for Jon Kenny and Mary McEvoy is an appropriate journey’s end for a two-hour passing-parade of an array of quirky, lovelorn characters that are lost on the margins of Irish rural society.

Jon Kenny is the fascinating Matchmaker Dicky Mick Dicky O Connor whose foray into making matches grows from the need for money after a bad harvest. His first correspondent is the desperate Fionnuala Crushed who ‘needs the imprint of a man’ before she goes to her reward. Although funny, it’s a desperate request from a woman who finds herself freed from the care of aging parents…and alone. Mary McEvoy plays a host of characters and is superb as the lonely spinster who knows the value of her holding and wants a firm man of independent means.

Fionnuala Crushed torments the poor matchmaker and wants her ‘twenty good pound what I gav ye’ back. Letters land like grenades on Dickey Mac Dickey’s kitchen table demanding satisfaction after two husbands – both of whom she buries – fail to perform in the sack. In desperation, she writes again and links her fortune to a five-foot nothing jockey that can’t be seen sideways. Nevertheless Dickey promises that Robert Fleck hasn’t spent all those years in the saddle without learning a trick or two and that he’ll be on to Fionnuala as quick as an onion fart. Fionnuala has her match.

It’s an earthy Rabelaisian narrative that spares no one. When the 68-year-old Right Honourable Claude comes a-calling for a filly that’s under 35 or a nice boy under 40, Dickey informs him that his matchmaking is between two sexes and not just one! The appellations for the male member are endless…’apparatus…shaft…berry…ha’penny…water sprout. We get the message. And the remedies for non-performance involves a lot of poitín being applied – externally and internally. It works so well on Tadhg’s reluctant match that his shy fifty-something-year-old bride turns into a sexual gymnast that can’t be satisfied and has the poor man worn out.

Jon Kenny is brilliant in bringing all these characters to life. Whether it’s the rasping jockey, the avuncular Claude, the exasperated Tadhg or the Matchmaker himself, all these characters appear before us as quirky, odd, angular, exasperated, frustrated, demanding, absurd and profoundly lonely. When the poignant moments appear, the comedy gives way to a love and understanding of what it means to be human and the recognition that there but for the grace of God go all of us. Director Michael Scott has paired movement to the minimum and ensures that Keane’s lyrical and descriptive earthy dialogue takes precedence over all other concerns.

There is a wonderful scene in the play when the local curate orders him to desist from his matchmaking exploits on the grounds that he is scandalising the parish. Dickey informs the gombeen priest that his understanding of his people is far greater than the prelate’s…’ I know my people’ he accuses ‘but you only know their circumstances’. Dickey is subsequently ‘read for three weeks in a row from the altar’ and described as ‘an ignorant clod’ by the vengeful cleric. Kenny’s performance of both characters is as diverse and realistic as it is brilliant realised.

Matchmaking is surely the saddest expression of the loneliness that always exists in society. Read the columns that search for partners in the back pages of magazines and newspapers and the common bond is loneliness and isolation. Bachelors, spinsters and widows, whose duty of inherited care is now past and who often stare through the windows of isolated houses in wet winters that no longer hold the skin of homes, fear the loneliness of the years that stretch out in front of them. And the braver of them stretch out the hand for services such as those offered by the matchmaker.

This Matchmaker is a diamond.