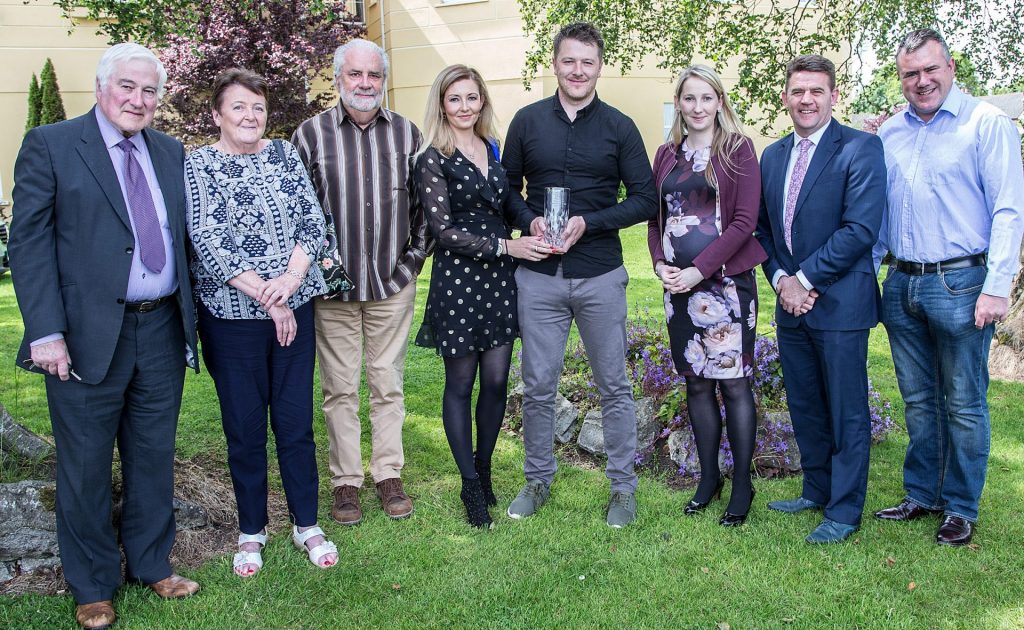 Racing motorbikes around a track or on open roads at speeds of up to 200mph might not be everyone’s cup of tea as a sport but amongst its loyal fan base it’s a huge sport and we’re lucky here in Waterford to have one of the finest exponents of the sport that this country has ever produced. That man is Tramore’s Brian McCormack and this week he picked up his first ever Park Hotel Waterford Sports Star Award monthly award.

HISTORY MAKER
Brian took the May award after making history at Mondello Park at the Dunlop Irish Masters Superbike Championships when he took part in six Superbike Pro races over two days and he won them all, a feat that was never achieved before.
In so doing Brian became the first Superbikes winner of a Park Award since Hilton Hincks won three back in the 1990s.
Brian was thrilled to win his first Park Award. “I’m absolutely delighted. When I got the call, to say that I had won this award, it was brilliant, it’s a great honour. Motorsport isn’t huge in this part of the country so to be noticed and to get this award definitely put a big smile on my face.”
At the awards luncheon at the Park Hotel, Brian was presented with his award by Rachel Kinsella, Sales & Marketing Manager of the Park Hotel. Joining Brian on the day were his girlfriend, Carol Molloy and his parents Eamonn and Jo. Also in attendance were adjudicators, John O’Connor, Neil Gough and Ger Lawton.

DIDN’T SEE IT COMING
Some times in sport you can plan and plan for something to happen and it doesn’t and sometimes things happen when you least expect them. Brian explains about that record breaking weekend at Mondello Park.
“It was mad really. The plan going there that weekend was to get the bikes set up for the Isle of Man but when I was there, obviously everyone in our sport is keen to win. Mondello used to be my stomping ground but I hadn’t been there much in the last few years so to go back and to be running in bikes and to win six races out of six and to do something that had never been done before, it was a magical weekend, especially as I had a lot of family and friends there too which made it even more special. To be honest I’ve had a slack few years so to come back and be so competitive, I was really happy.”
Unlike places like Northern Ireland, where Brian is a big name, Superbikes wouldn’t be a huge sport in these parts so how did Brian get into it. “Yeah it isn’t huge around here, but I think that’s changing a bit and it’s great to see so much enthusiasm now for the sport. I started when I was very young. Hilton Hincks (a three time Park Award winner) was going out with my sister and I got into the sport through him and my brother and sister who were also big into it and of course the late Maurice Kiely. I travelled all over with them and then when I was old enough I went to the Credit Union and got a loan to buy my own bike and it took off from there. It’s been a struggle, it’s very hard to get sponsors, especially at this side of the country, but I’ve worked hard and thankfully it’s started to pay off over the last few years.”

PHYSICAL FITNESS SO IMPORTANT
Like so many sports, Superbikes relies a lot on skill, physical fitness and mental fitness.
What kind of physical fitness is needed to compete at this level of the sport? “Yeah, a lot of people say sure all you’re doing is sitting on a bike but it’s a huge part of it and you can’t be mentally fit if you’re not physically fit. I’m lucky that Ambrose Murphy of Tramore Taw Kwon Do does a lot of work with me and he’s very into the sport as well and to be honest this year has been my best year physically, thanks to him. One of the races in the Isle of Man TT is two and a half hours long with speeds of up to 200mph so if you’re not fit you’ve no point being there. Also for me I’m a big chap in that I’m 6’3 so I’m naturally a bit too big for bikes so the fitness side of it is huge.”
What kind of work goes into the skill side of the sport? “To get to this level of the sport you have to have to be some bit special and have ability but you have to hone your skills and you have to work hard at it. I’ve always done it on my own. I’ve never had anyone coaching me. Hilton has been a good mentor to me over the years but I think he wanted to keep a lot of the secrets to himself because he was still very competitive when I was starting off. But I learned off him and Niall Costello and from watching other riders around the paddock and on TV. I mightn’t be the most naturally gifted and because I’m big I might have a bit of an awkward style on the bike but I work hard at it and try to be as safe as I can and as fast as I can.”

A DANGEROUS SPORT
In such a dangerous sport, the mental side of things must be huge? “Unfortunately it can be a horrible sport at times. I’ve lost a lot of friends over the years and you see the strain it puts on people’s families and it’s very hard to get over those things but when you have the right people around you and you’re doing it for the right reasons you’ll be ok. I don’t do it to make money, I love my bikes. If you’re doing what you love as your sport then it’s huge. If you’re doing it for other reasons, you’ve no business being there. I know why I’m doing it, there’s no gun to my head so mentally I know these things can happen but this is something I’ve always wanted to do. There are pictures of me at home at three years of age with a helmet on. Mentally it’s hard to keep concentrated some times, like every sport there are plenty of distractions but if you have the right people around you they’ll keep you mentally grounded and that’s very important. It’s very competitive and we all want to win but you want to be safe too and come home in one piece.” 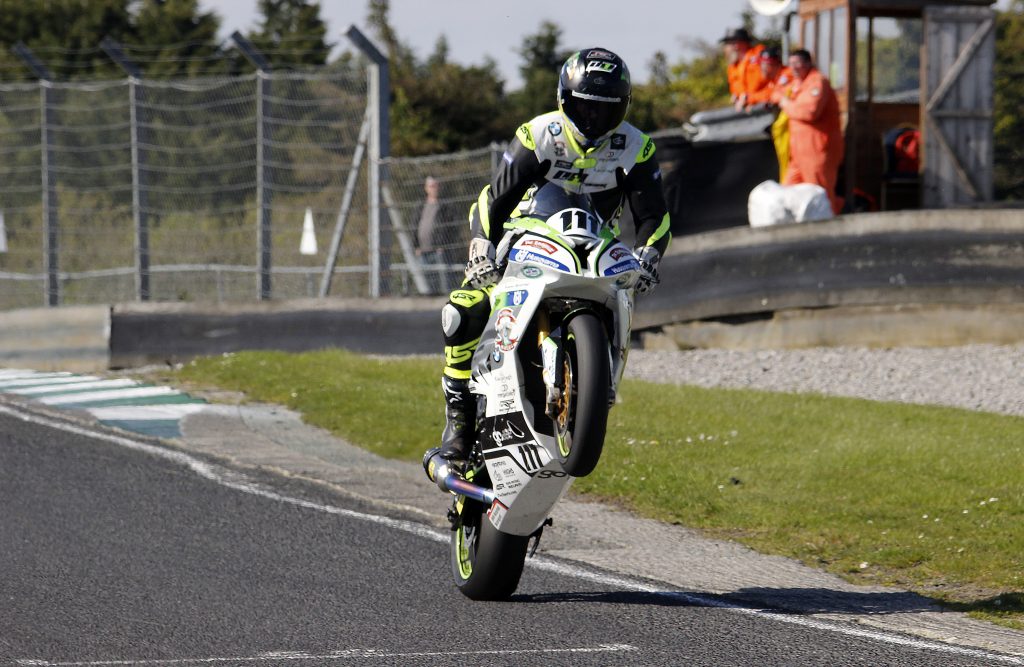 Brian McCormack celebrates one of his six Superbike wins at Mondello Park in May. Photo: Eamonn Russell.

BIG YEAR AHEAD
After becoming the fastest ever Republic of Ireland rider at the recent Isle of Man TT, what does the rest of the year hold in store for Brian?
“The Ulster Grand Prix is the next big one, it’s a big International Road Race up near Lisburn. I finished fifth in it last year so this year I’m gunning for a podium but really I want to win. I want to win one of these International Road Races and then it’s back to Isle of Man for the Classic and then it’s Macau in China in November. There’ll be others in between to keep sharp and keep me on my toes but it’s a hugely expensive sport so we have to curtail what we do. I’d love to be out every weekend but you can’t do that.”
A lot done but plenty more to do. “I thought two years ago that I was going to hang up my boots but I met my girlfriend Carol and a few other things have clicked into place and I’m enjoying it more than ever and thankfully all the hard work is starting to pay off so hopefully I’ll get another few years out of it,” and so say all of us.