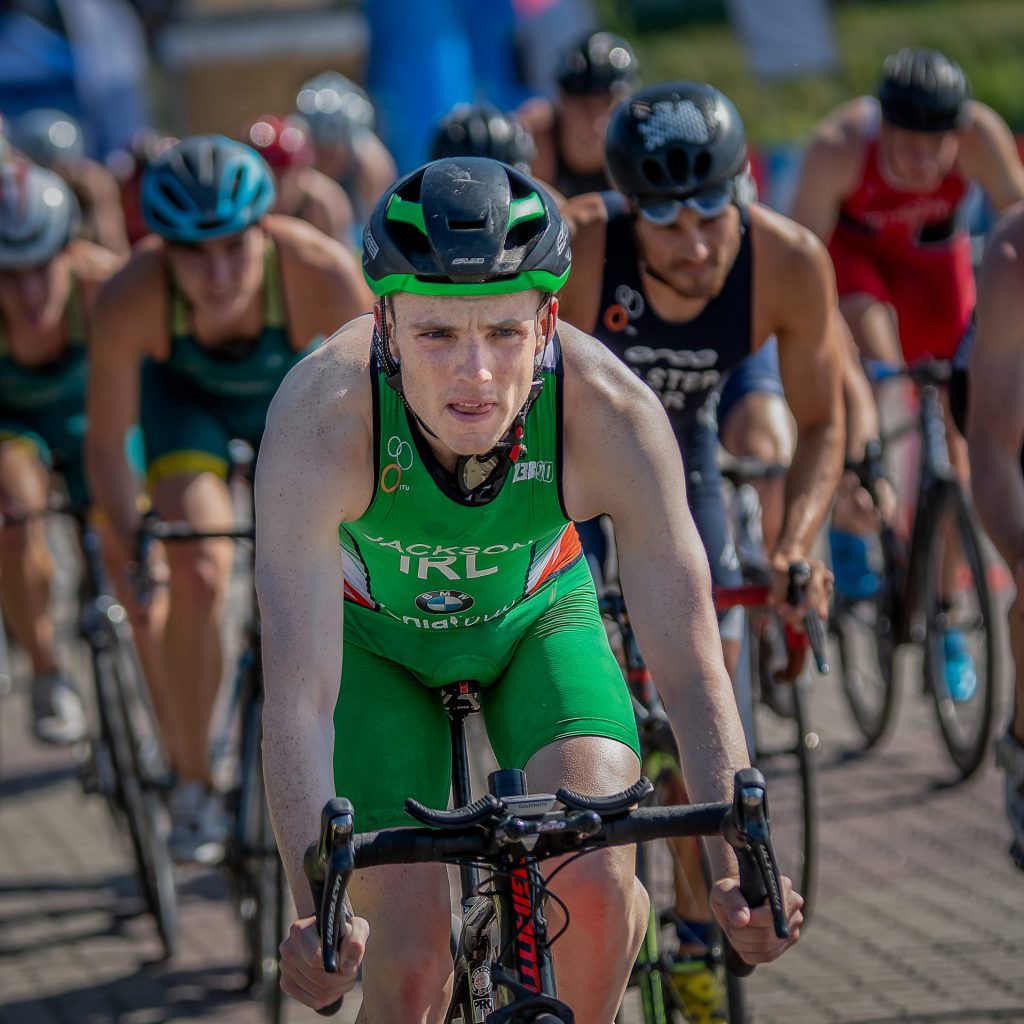 Tramore’s Kieran Jackson in action during his International Superleague Triathlon debut in Poznan, over the weekend. Photo: Damien Jackson.

Poznan, Poland was the venue for Kieran Jackson’s first international race of the 2019 season at the weekend.
The Tramore triathlete was going into this race off the back of two home wins at Athy and in the National Series race at Dunmore East on the 15th June. The race was the international Superleague Triple Mix format, a recently introduced high octane spectator friendly version of triathlon which involved three super sprint distance races with 10 minutes rest between each one. The sequencing of the three triathlon disciplines also changes from the traditional triathlon Swim – Bike – Run to Run – Bike – Swim for the first race, Bike – Swim – Run on the second race and Swim – Bike – Run for the final race.
The prize at stake here for the first three athletes across the line was a place in the lucrative World Professional Superleague Series which takes place later in the year. A total of 30 athletes from Europe, USA and Australia made up the starting list. Favourites were the two Polinsky brothers from Russia who have been racing the European and World Triathlon series for several years. As the 4pm race start time approached conditions were tough with the current European heatwave pushing temperatures to 30 degrees in Poznan.

RACE ONE
At 30 seconds to race start, the stadium built on the side of Lake Malta fell silent, the countdown began and the tension rose. The siren sounded and the race was on as athletes battled each other for room on the tight course.
The run consisted of two laps in and out of the stadium making it very entertaining for spectators. Jackson went out hard and the field soon strung out leaving a group of about 10 athletes with a five second gap on the remainder of the field. Jackson entered Transition 1 with a group of five and they were quickly away on the bikes. Five laps this time of the same course with a hairpin turnaround in the stadium. The pace was sizzling as a pack of 10 including Jackson powered up putting some time into those behind them. This group entered Transition 2 racked their bikes and sprinted the 150m metres to the pontoon and dived into the waters of Lake Malta for the 300m swim.
The Polinsky brothers are renowned worldwide within triathlon for their swimming ability and soon extended a gap of almost 10 seconds over the remainder of the leading pack. The athletes emerged from the water and sprinted the 100m to the finish line with Jackson finishing in fifth place for Race 1.

RACE TWO
Ten minutes to rest, set up their gear and get ready to go again. Temperatures were soaring as athletes sought whatever shade was available and poured water on themselves to try cool a little before the next race.
Race 2 got underway starting with the bike leg followed by the swim and finally the run. Jackson got away with a pack of seven on the bike and they extended their lead to almost 20 seconds over the rest of the field. They held this lead into Transition 1, racked their bikes and sprinted to the water and they were away again. The Polinsky brothers once again showed their superb swimming ability and together with British Triathlete, Pershaw opened a gap to lead going into the run leg. The field was now beginning to string out but Jackson held firm in the run to finish in sixth place overall after Race 2.

RACE THREE
Ten minutes later a group of by now tired triathletes lined up again, this time the sequence was the traditional swim, bike, run format. Athletes started the swim in accordance with their accumulated time gaps from races one and two. Jackson dived in sixth position but the Russians and the British triathlete were in the water a full minute at this stage and increasing their lead with every stroke. The pace was pushed even harder on this final third race but Jackson stayed strong final to finish a very impressive sixth place in his debut in the Superleague format. Speaking afterwards he said “Racing the Triple Mix format really tests your versatility and endurance, it was a brutally tough event where I was on the limit for the whole hour of racing! It was a great race and I’m delighted with the result”! Next up for Jackson are the National Championships at Olympic Distance (1500m swim, 40km bike and 10km run) which will be held in Wicklow harbour next Sunday 7th July.