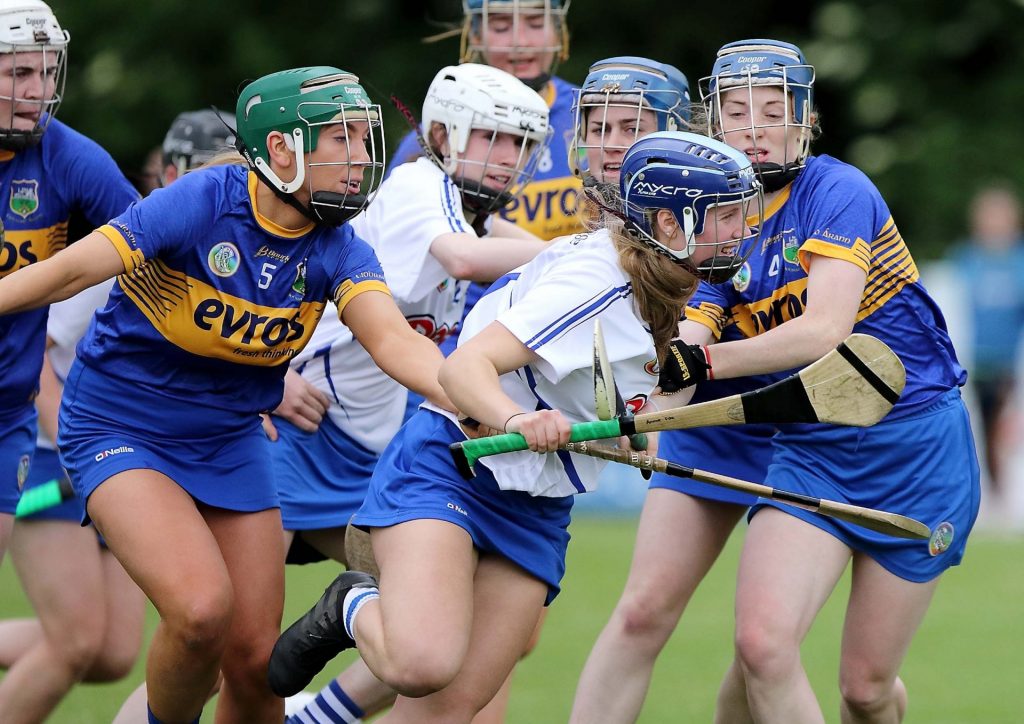 Waterford’s Annie Fitzgerald is surrounded by Tipperary players as she heads for goal. Photo: Noel Browne.

After their first meeting at the Ragg had to be abandoned two weeks ago due to an injury to a Tipperary player, these sides met again on Saturday, this time at Nowlan Park in Kilkenny.
Both teams were again fired up as was evident from the throw in when a ruck took all of 30 seconds for the ball to be won by Shona Curran who drove up the centre to the field to Beth Carton who caught it but was pushed in the back. First opportunity for Beth to put a point on the board, and she did. This game was marker on marker nobody was given an inch so there was going to be plenty of tussles.
After winning the ball in the middle of the field, Megan Ryan found Grace O’Brien who took a shot from the 21 yard line that just dipped under the bar for a goal. Tipperary then won a ball on the wing and it was driven into Ereena Fryday who popped it over the bar.

DÉISE IN FRONT
A tussle between Niamh Rockett and Clodagh Quirke results in a free for Beth Carton to take and she slotted it over from the ‘45. A shot on goal by Cait Devane saw Waterford goalkeeper Brianna O’Regan bat it out for a ‘45 which Cait Devane took herself, another for Tipperary.
A well won ball by Aine Lyng on the set up Niamh Rockett for a great point from an acute angle. The puck out is won by Mary Ryan in midfield onto Cait Devane who saw her shot stopped by Brianna. The rebound by was again stopped by Brianna O’Regan but third time unlucky when Megan Ryan pulled it into the net.
The puck out was won by Emma Hannon who quickly fired it over the bar. Shortly after Cait Devane adds another for the Tipp girls from a free before Cait Devane sets up Megan Ryan who pointed from close range.
The puck out was won by Kate Lynch who picks out the run of Annie Fitzgerald before she is upended by Julieanne Burke as she is going for goal. Penalty for Waterford. Up steps Beth, three defenders on the goal line with Caoimhe but Beth bends, lifts and strikes it to the back of the net.
Another free for Waterford on the ’65 taken by Aine Lyng who finds Sarah Lacey who in turn passes to Beth Carton who slots it over.
A tussle on the Waterford half-back line resulted in a free to Waterford which Trish Jackman hit long to Annie Fitzgerald who lashed it to the net just before the sound of the half-time whistle. Half-time score: Waterford 2-6 Tipperary 2-5.

TIPP’S FAST START
From the throw-in Tipperary’s Grace O’Toole won the ball before finding Ereena Fryday who gave Brianna no chance, goal Tipperary. The puck out was won by Trish Jackman who found Emma Hannon who fed Beth Carton for a fine point. But Tipperary struck back with Cait Devane once again proving a thorn in Waterford’s side with another green flag.
The Déise weren’t about to throw in the towel and quickly hit back with points from Beth Carton (F) and Sarah Lacey. By now Beth was all over the field as she wins a ball in the half back line on the run down the wing was Trish Jackman whose dipping shot had the Tipp goalie beaten but not the bottom of the post.
A ’45 for Beth Carton made it a one point game and took her tally to 1-9 for the day.
A ’45 for Tipperary reinstated their two point lead as the game enters four minutes of injury-time.
The puck out was won by Trish Jackman who passed to to Orla Hickey who put it over the bar. The puck out was won by Megan Ryan who found the ever dangerous Cait Devane who raises another white flag for the Premier. Mary Ryan won the ball and found Megan Ryan who fired it over from the ’45 over the bar. Two points in it again as Waterford won a free on the ’65. Beth drove it into the square, pulled on by the forwards but out over the end line, wide. The puck out was won by Mary Ryan onto Niamh Treacy out on the wing takes her chance and it sails over the bar. Game over, Tipperary win by three.
Waterford face Meath away next week. Come and support the team.

JUNIORS IN ACTION
Waterford’s other adult team played Offaly in the Premier Junior Championship in Birr also on Saturday. This was the first round in this group. Final score Waterford 1-11, Offaly 2-10. Waterford play Limerick in round two on 13th July in Limerick.
Our U-16 team begin their championship next Sunday in Hawfield, Newbridge Co. Kildare against Derry at 3.45pm. Come and support our county teams.