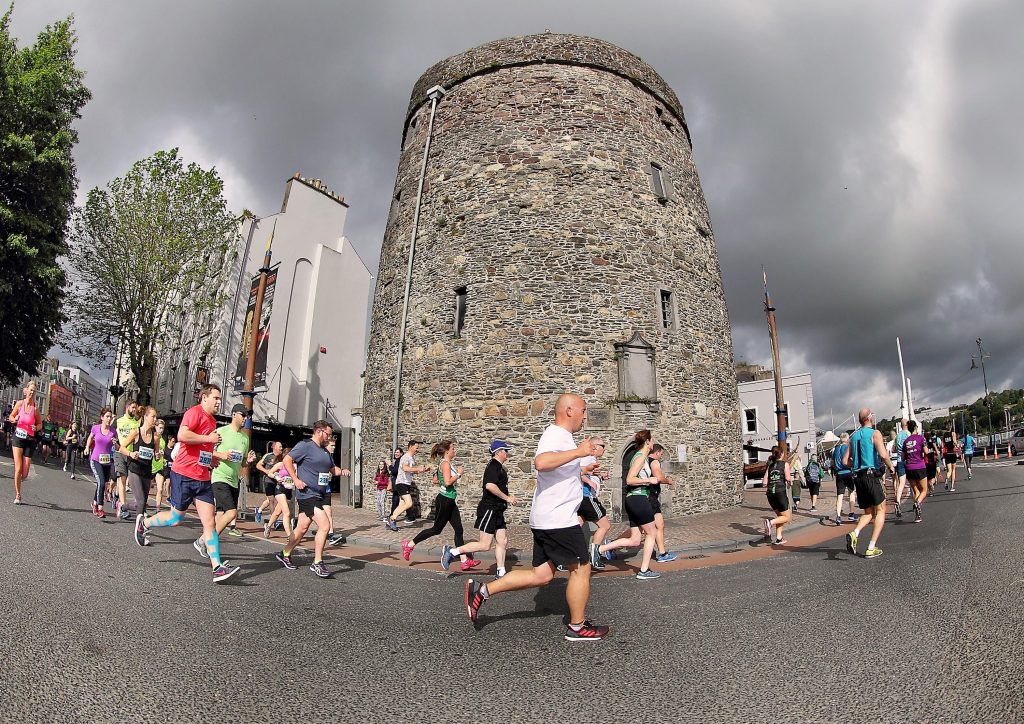 The runners go past the famous landmark of Reginald’s Tower in the WLR Waterford Viking Marathon. Photo: Noel Browne

‘The hint that they were running out of wine at the finish line definitely made me increase my pace for fear of missing out.’

THE warm up on the Mall was merely a suggestion of things to come. The beat on the Viking Drum stirred up an energy, an excitement and a buzz that was infectious. The running gear was stylish, colourful and adorned with various charity identifiers. The runners themselves a mix of ages, of sizes and gender, all engaged in nervous chatter or the various mind games involved in self-motivation.

For today was the day we had all been busy training for, the day we had been aiming for, for so long, the day we had looked forward to and dreaded in equal measures. The day of the Waterford City Viking Marathon, half marathon and quarter marathon.

Not being one of the few enthusiastic racers struggling for position at the front I was soon swallowed up by a sea of people. If I hadn’t started running of my own accord I would have found myself moving along anyway carried by the multitude of athletes before and behind me. Watches were set, deep breaths were taken and we pushed forward to cross the start line. From there it was every man and woman for themselves. People ran around each other, in front of each other and nearly over each other. Survival of the fittest it would seem. But it wasn’t long before the fittest thankfully moved on and more relaxed individuals like me were left to our own devices.

The sun was shining but not too brightly, the wind was blowing but not too strongly and the rain clouds were far away. The perfect day for running. Everyone at the start was pumped with adrenaline and nerves. But without experience, adrenaline is your worst enemy. It is so easy to get carried away with the excitement and the support from the side-lines and fellow competitors but peaking too early means a guaranteed walk is ahead of you.

Running gently over the exquisite feature that is the toll bridge was a surreal experience. I have driven over it many times but to actually run along the lane and look back over the river was impressive. It would have been a good excuse to stop for a photograph but I reckoned I would have caused a pileup and plus I may never have started again.

Signs along the route were a great distraction from the mental concentration, read torture. The hint that they were running out of wine at the finish line definitely made me increase my pace for fear of missing out. But it all comes down to mental strength I believe. After a few months of training I have realised that this running lark is all about mind games. It’s a cliché but if you believe it then you can achieve it. If you think you can’t then your legs and lungs will absolutely agree. Every time. In the words of Henry Ford, “Whether you think you can or you can’t, you’re right.” Positive thoughts will get you through any run. My own favourite was thinking about not dying.

It’s important to stay hydrated as you run. You will need a reserve for all the tears of pain and relief shed at the finish line. I certainly shed a few of my own when I was nearing the end and saw the family waiting for me and cheering me on. One of the best moments ever. And let’s face it if I can do it, being more couch potato than skinny fry, then anyone can do it. But crowd support really helps especially when you run towards the ones you love. Thanks guys… shh Mum’s the Word.

Summer gets more expensive every year. Not because of foreign holidays to exotic far flung shores. Not even for the endless amounts of cooling ice cream and cocktails in the garden. No, the summer gets more and more expensive because every time we go to the beach for a run around, a ball or a Frisbee comes with us and invariably gets thrown out into the waves where we bid it farewell and then go and buy yet another.

“One day when my children are grown, I hope they still come through the front door without knocking. I hope they head to the kitchen for a snack and stretch out on the couch to watch television. I hope they come in and feel the weight of adulthood leave them once they are home. For my children, my door will forever be open.”