Waterford Whiskey: going with the grain on Grattan Quay

CON Murphy clicked the cursor on a computer screen in the Waterford Distillery Control Room to set a distinctly local ball rolling on the morning of Wednesday, June 19th.

He then descended two flight of steps, striding past the distillery’s two hand-beaten copper pot stills, crossing the sun-splashed yard to press a grain intake button before unloading his Annestown-grown barley into the four silos behind him.

Experimental distillation began at the distillery on October 31, 2015 so the aspirant release date of its first bottled whiskey in 2020 remains on schedule.

“This is all about producing the most profound single malt whiskey ever made,” said Renegade Spirits Managing Director Mark Reynier almost five years ago. “That’s the ambition.” And given the progress that he and his team on the Suir’s south bank have been responsible for in the interim, that declaration may well be realised within the next 12 months.

“But you need a 45 acre parcel of land to supply the quantity needed here, to guarantee the hundred ton and mine ended up being a lot better than I thought it would given how tough last year’s crop was on everyone on account of the weather. I’m in corn all my life and between the snow and the heatwave I was wondering what I was going to get out of it. The snow delayed setting and sure that was only in the ground when we got the drought. The barley I’m growing now still isn’t finished but there’s plenty of moisture in the ground at the moment so we’ve no worries on that front this year.”

Con’s first visit to the brewery site came on a Sunday morning during the closing weeks of the Diageo era when his son-in-law (a brewer who is now back on the books here) brought him in around a look.

“It’s just fantastic to see the place looking the way it does now,” he said. “If this place had been left idle for too long, it would have been an absolute disaster if nothing had been done with it. It would have been decimated in a very short space of time if it hadn’t been bought. When Diageo made the investment here (approximately €40 million in 2004 to produce the ‘essence of Guinness’), I said to myself, sure my daughter will retire out of there.”

“Sure we all thought we would,” said Head Brewer Neil Conroy, a WIT graduate who put in 13 years for Guinness on Grattan Quay.

“But this is going to be a fantastic industry going forward,” Con declared, prior to his August/September 2018 crop entering the production flow. “All it will mean is that there’ll have to be a higher price paid for the product if you want cereal farmers to grow the barley for single malt as it has to be specific for what’s needed here.”

Head Distiller Ned Gahan said that all 73 farmers currently supplying the distillery “can see exactly where their grain is going and what it’s being made into. The traceability we have here is a huge part of what we do. Terroir (or Téreoir) described as the ‘3D interaction of soil, microclimate and topography on plant growth’) is massive for us; it’d be seen as our unique selling point. Mark (Reynier) says it’s part of our ‘Holy Trinity’ – terroir, traceability and transparency – I think of it like a three-legged stool, and if one of them is missing, then the stool will fall over. Everything we do here is driven by quality.”

Last year’s ‘Beast from the East’, coupled with the subsequent summer temperatures, has not disrupted plans to have the Waterford Whiskey brand on shelves next year.

Said Ned Gahan: “If you look at a grape and you talk about vintages, you might see a bottle of 2008 Chateauneuf-Du-Pape and that might have been a great year so you could be talking about €400 a bottle and then say a 2009 bottle might have come in at €250, well that’s all down to the vintage and the grape and it’s moreorless the same with the grain. But specifically in our case, a difference in yearly weather creates different flavours, and that’s what you’re looking for.”

Neil Conroy continued: “Last year’s crop was difficult for the farmers because it yielded poorly so they wouldn’t have produced as much grain as would normally be the case given how harsh the conditions were. We look for a specification on the barley we receive here of nine and a half per cent protein and because of the difficult harvest, for most farmers that was unachievable so we accepted grain in at ten and a half per cent protein just to allow us take in grain from Irish farmers. Because proteins are high, it means we have difficulties getting good yields into the distillery: we look for a quantity of spirit for every ton of malted barley we take in here. But, as Ned mentioned, the difficult season ended up giving us different flavours through the stills. Last week, we took in a farm that yielded very poorly due to the very high proteins of barley but the flavours from that spirit were very good. We didn’t get as much spirit as we would have wished for out of it but the quality was exceptional.”

No grain is wasted by the distillery, as Ned explained. “The endgame is to create spirit but when you’re creating spirit, you’ll also create some spent grain which will go the farmer as cattle feed and you also have pot ale which comes off the wash still and that goes to the pig farmers so ultimately you’re talking about byproducts as opposed to waste. And at the very end, when you’re finished with the spirit still, the last processing area, then you have spent lees. You’re concentrating up the alcohol to about 70 per cent so if you send up a charge of 17,000 litres into the still, 12,000 of that is water, so you’re just taking all the alcohol out of it and what’s left is just water. And we send that to an effluent plant which balances pH and temperature and that goes down to (the water treatment plant at) Belview.” As Neil put it: “Anything that we can distill from the grain, we distill.”

As for Mark Reynier, Ned Gahan commented: “He has a vision and he knows exactly what he wants to do. And he’s given us the power to make the day-to-day decisions here. What he, the board and the investors are biggest on is quality. From day one, they said they didn’t want to release a gin or a pre-sell product as they had the money to keep things going for the six years or so before we start getting an income. They didn’t want to dilute the brand whatsoever and we know how fortunate we are to be in this position. But of course we’re looking forward to Mark’s vision, which we all bought into, becoming a reality next year, all things being equal. It’s an exciting time.” 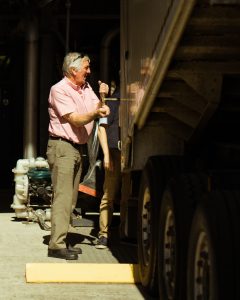 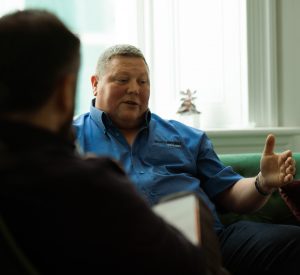 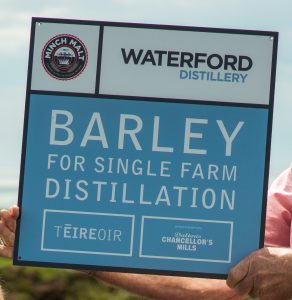