A half-page article in The Irish Times last Thursday spoke of the weakness (shopping wise) of the centre.

Shops are empty. Too many shops are vacant. People are not spending money here. Parking is too expensive and out of town centres are killing the centre. No, it’s not Waterford city, it’s Naas in County Kildare.

Every town and city in the country, with possible exception of Dublin is having retail woes. Locally, people think that difficulties are unique to Waterford, and at a time when the international trend is to remove cars from the centre of cities, there are those, some Council members among them, who believe that cars in the centre of Waterford are necessary.

We all share a concern for our city centre and its ability to attract retail customers, but it is hard to believe that opening places up to vehicular traffic again is in anyone’s interests.

Cars can drive on Ballybricken, O’Connell Street, High Street, parts of Michael Street, Gladstone Street, The Quays and so on yet there are empty shops on all of them. If revitalisation was as simple as allowing traffic back into streets then towns and cities all over Europe would have done so.

The challenges posed by internet shopping and huge on-line retailers like Amazon are enormous and growing, there still has to be a place for traditional retailing but even that must change.

Ireland is still a place where people want to drive their cars everywhere without regard to the environment or a safe and pleasant pedestrian ambience.

We don’t want to walk. We don’t want to pay for parking. The motor car is an expression of our ability to go anywhere we wish, when we want to and people resist any change to that “freedom”!

The redevelopment of Arundel Square has posed particular challenges.

The large unit built by City Square is unoccupied now for over a year and more than anything else that has made people begin to question the status quo. The closure of City Square at night time, especially through Peter Street has caused problems for urban permeability since it was built. It must be reopened in some form.

From Alexander Street to the Clock Tower this is all traditional retail, all of which closes at 6pm. Why would you need to go to Broad Street after that? Uses must be inserted through that area, which have vitality after normal business hours.

Many small European cities like Waterford have central pedestrianised cores. Almost all of them will have restaurants and bars in those core areas which remain open in the evenings.

The proposed gastro pub for Wetherspoon’s in Broad Street/Arundel Square is a vital first link between the quays and the Applemarket area.

Unfortunately, as frequently reported in these pages, that company seem disinterested in developing their property and have blighted both streets. If they were to proceed, with perhaps two, three or maybe four similar offerings in Barronstrand Street, Broad Street and Michael Street, it would enliven the whole area.

We also forget that between 2008 and 2011, Waterford lost nearly 2500 jobs. The government response was nihilistic and both UHW and WIT have been under siege since.

Our city is slowly recovering from the crash and confidence is returning, but the response of local business to the development of our city has generally been lacklustre.

Everyone is sitting back and waiting for Michael Walsh to work a miracle for them on the North Quays.

While we wait for that renaissance, and the long-awaited government funding for infrastructure, we might consider the words of the famous US commentator Jane Jacobs in her masterpiece ‘The death and life of Great American Cities’.

While she cautioned against extrapolating from large cities to small cities, she wrote about central areas, “The general aim should be to bring in different uses, because lack of enough mixed uses is precisely one of the causes of deadness, danger and plain inconvenience”. We in Waterford city need to think carefully about those words.

News has emerged of a business plan being drawn up to build a new Orthopaedic Centre of Excellence at UHW with a planned relocation of the elective procedures facility from Kilcreene in Kilkenny to UHW. Extra consultants and support staff would of course be required.

It’s worth remembering that something along these lines was proposed when the Higgins Report hospital groups were formed.

A specialty based in Waterford to serve the group was promised as part of the whole deal. That never happened, but it is interesting that David Cullinane says that the hospital group is now fully supportive of this development. Trust in this group is testing, to put it mildly.

Mr Cullinane has worked extremely hard and long on the Dáil Health Committee, the PAC and in the Dáil chamber to articulate the UHW case.

Without him much of what we know about the despicable treatment of UHW by its Cork SSWHG masters would never have emerged.

It is ironic and somewhat suspicious that proposals to develop UHW (welcome as they are) now appear when moves are afoot, under Sláintecare to restore the south east hospital network and realign it with the south east community health office under the Ireland East hospital group.

The reality of the SSWHG and Cork political/medical/educational treatment of UHW can be summed up in one word: Mortuary.

This high priority facility was left linger on a HSE Capital Plan for years without any progress. Bodies were stored on the floor, but who cared? No one in Cork as far as we could see. They were too busy ‘bigging up’ a situation of toxic overmanning in their own bailiwick to understand that they could bring people with them.

Four Waterford pathologists did 600 post mortems last year. Twenty Cork pathologists did 800. Rather than seeking cost benefit analysis of the orthopaedic proposal for UHW, the HSE should get to grips with overspending and overmanning and possibly plain incompetence and consider a root and branch examination of staffing and performance in CUH.

UHW is, by my reckoning, one of the most efficient hospitals in the country. For that privilege they have been shafted and dumped on by the HSE and a Cork-led medical establishment for the past decade.

Being involved with Cork on anything is against Waterford’s ultimate benefit. The last straw is the business case proposal for robotic cancer surgery in UHW. Hugely welcome, no doubt, but there are eight national cancer centres in this country. UHW is one of them.

The other seven all have the necessary robotics even though UHW demand and throughput is at least as busy as five of the other units. This disgraceful ‘hind tit’ treatment has permeated the SSWHG maladministration of UHW. They have undermined a very good hospital at every budgetary turn. I have no respect for those who have no respect for us.

And in retrospect, the Development Control Plan for WRH, published in 1972, included the proposal to shift elective orthopaedics from Kilcreene to Waterford.

It’s amazing that business cases emerge at a time when the money to actually do things does not exist. The over spending on the National Children’s Hospital will haunt us for years.  Are we actually certain that the funding to open the new Dunmore Wing of UHW is actually available?

Walking on The Mall one can see the stumps of the row of trees recently felled by the Council. The most poignant thing is that several of them have started to sprout new growth from the terrible blackened stumps.

Meanwhile, trees planted to make up for the awful loss are, apparently all dead or dying. They were planted in a hurry because of the furore over the felling of the original trees. But no one watered them or paid them any heed.

This is not abnormal in Waterford city. When driving down Colbeck Street there are five or six trees planted in the Bishop’s Palace garden and all are dead or dying. Insufficient watering?

The maintenance of city green areas, trees and flowers is extremely problematic. Is there any professional input at all?

It’s in stark contrast to the level of effort in the county. Are the workmen responsible in the city-trained properly in horticulture?  Have we gardeners employed to ensure that things are done properly?

Why do we design paving schemes and allow trees and planting to be run over and not replaced? Bank Lane and Henrietta Street are cases in point. Do the people in charge in City Hall ever go for a walk and see what should be done?

We probably thought that the days of wholesale demolition were past but the proposal to demolish the 18th Century building on the corner of The Mall and Lombard Street plus all the 18th Century houses on the street down to Rose Lane is quite extraordinary.

We have had Councillors hanging from the rooftops about housing developments in Knockboy but not one single person has spoken about what is proposed in Lombard Street.

The demolition is to facilitate a hotel extension which everyone agrees is a positive thing, but was any consideration at all given to preserving the historic façades in Lombard Street and building the hotel requirements behind them?

The building on the corner of the Mall and Lombard Street is a much altered 18th Century building which was heavily altered over the years. Very little of its original internal fabric remains. However, it is pivotal to the appreciation of the streetscape on The Mall and on that corner and should not be demolished under any circumstances. It defines the whole corner.

If a sympathetic restoration of the façade was undertaken, with the insertion of proper timber, sliding sash glazing, it would be like a jewel.

It’s hard to understand how a planning application which facilitated the demolition of this corner building was ever allowed to progress this far. Our planners should have shouted stop. 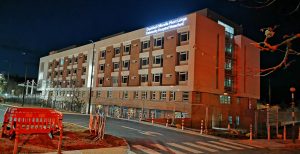 The Dunmore Wing at UHW. The extent of its future staffing remains unclear.