The ‘Mind Games’ of domestic violence

A stark and powerful 45-minute play staged by a Belfast-based theatre group was brought to Waterford and Dungarvan by Oasis House Women’s Refuge and the City and County Domestic Abuse Outreach Service.

‘Mind Games’, written and directed by Patricia Downey, provided audience members with “an eviscerating exploration of domestic violence and the shortcomings of the legal system” in Northern Ireland.

The play, which has been performed in several high security jails in the United States, has also been staged for PSNI cadets at Stormont, with an age appropriate version staged in secondary schools north of the border.

Ms Downey told Waterford audiences that in the event of securing financial support from a reconvened government in Northern Ireland, she would like to bring the play to many more schools, while also providing an after-play workshop for students.

“We want to take 30 students each day into an intense workshop,” she said. “This play is based on a true story so in that workshop, the students would see the texts sent by the aggressor (known as Art’ in the play), they will see messages in which he tells Lucy (the victim) how to hang herself and much more besides.”

She added: Youngsters in schools today – girls as much as boys – are all into texting and writing in that funny language, so they’d get to see those messages, we’d project some of them during the workshop and talk about it so that students can embrace with the issues we’re raising in the play, it’ll help them to connect with it. The plan is to get them thinking about domestic violence and what it means to be a victim of domestic violence so we were very pleased to get the chance to run the play in Waterford, Dungarvan and New Ross.”

The play was written in 2015 at a time when sentencing laws regarding the perpetrators of domestic violence drove the playwright “nuts”. She explained: “In Northern Ireland, at the time, you got two years (in prison for such an offence) but you only did half the time, and in the case of the predator in the play, he actually only served nine months. We’re fighting to change the law; we’ve a proposal ready for the past two years that we wish to put to government, but of course we’ve got no government to enact it, which is very, very frustrating. In fact, it’s sickening.”

The play also provided Oasis House with an opportunity to highlight the Domestic Abuse Outreach Service it initiated earlier this year. Thanking Patricia and her cast, Rebecca Beegan of Oasis House hopes to work with the Spanner in the Works Theatre Company again in the future.

“Domestic abuse takes on so many guises, be it physical, emotional, financial, sexual or psychological,” she said.

“We provide one-to-one support to victims and their families. Anybody can refer – they can self-refer – or an agency that they work with can refer on their behalf by ringing the Locall number 1890 264364 which is available 24/7, where the phone will be answered by a refuge worker who will direct the caller to the appropriate service, be it at the refuge in Waterford or via the Outreach Service and we will then make contact with such callers in the safest possible manner. We can meet them in their homes if that is safe, but, more than likely, we would meet somebody in such a situation within their own community because victims, particularly those living in rural areas, face additional barriers facing them when it comes to accessing services.” 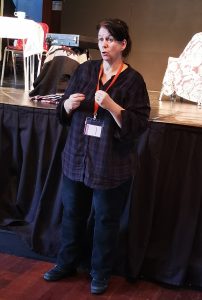 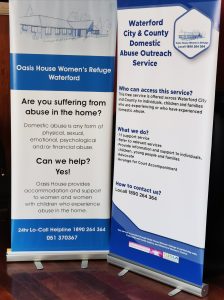 Oasis House has been operating an Outreach Service for victims of domestic violence since the turn of the year.

Brendan Bowyer: the star who never forgot his City of Music