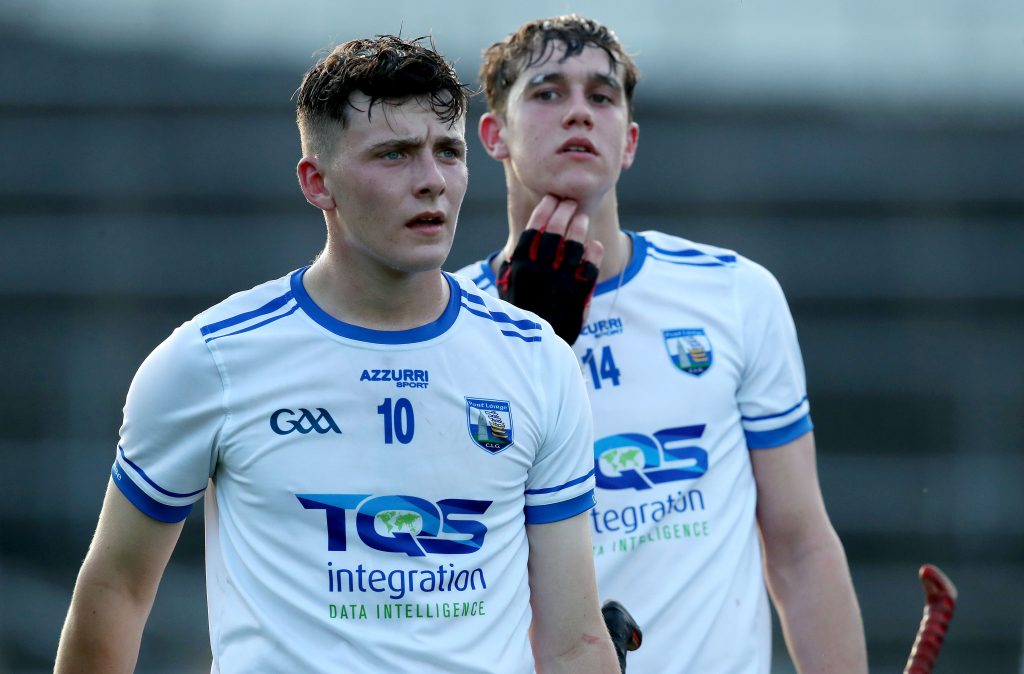 Waterford’s Tom Barron and Michael Kiely dejected at the end of the game.

In 2000, a Waterford under 21 team containing James Murray, Eoin Kelly, Seamus Prendergast, John Mullane and Eoin McGrath beat Tipperary in their own backyard. The first and last Déise team to do so.
In 2016, Sean Power inherited a special bunch most of whom had benefitted from a high performance environment with Derek McGrath’s seniors. They won that memorable Munster final in Walsh Park which sent them on their way to the All Ireland.
The point is that with the best players and the best preparation, Waterford have struggled to topple Tipp at this age grade. It has only happened four times. The most galling thing about last Tuesday night was that the class of 2019 didn’t stand a chance of even being competitive.

Four months behind
It wasn’t all plain sailing for Power in terms of team preparations either, but this group needed more attention than the last three teams he oversaw.
The 2017 minors lost three Munster matches by an aggregate of 46 points while the 2018 crop won two of out four. There wasn’t the same star power either. In fact, Billy Power was Waterford’s only senior panellist.
Stephen Gough and his backroom team stepped into the breach on February 18. They took it on as a two-year project because by the time they were appointed in 2019, they were already four months behind Tipperary. Liam Cahill was ratified on October 23.
Before the match, Tipp FM played a clip of Cahill talking about his grand plans for this competition. He was laying the groundwork while he was still under 21 manager. “We targeted having as many players as possible, that would be eligible for under 20, on the tail of our panel. Some of them, as the year progressed, went on and made the starting fifteen and saw action in the All Ireland.” Ten of those are still involved this season.

Knocked back
Gough highlighted the difference in physicality in his post-match comments. Tipp wore them down.
Michael Kiely won two early frees off Michael Purcell but the Abbeyside attacker didn’t get a sniff after that. The visitors were held scoreless between the eighth and 24th minute as they couldn’t get over, around or through the Premier half back line.
During this period, Sean Whelan-Barrett was knocked back by a Ciaran Connolly shoulder, Billy Power was blocked down, Kiely was dispossessed, Brian Lynch shot wide from 65 metres and Tom Barron couldn’t find a pass inside to the full forwards. When Ian Beecher managed to win a puckout, Barron lost possession and a subsequent Dan Booth delivery was caught by Connolly and Conor Bowe pointed into the Killinan End. It summed up Waterford’s difficulties. Most of those high balls were nuts to a monkey for Connolly and Bryan O’Mara.
The attitude of the Tipp forwards also made it difficult for Waterford to find their danger men. Jake Morris hooked Beecher at midfield and the ball fell to him moments later. He played a one-two with Billy Seymour in front of the Old Stand for the score of the evening.
Waterford resorted to illegal means to stop Tipp in their tracks. They conceded seventeen scoreable frees (thirteen converted by Morris and Seymour) and six players saw yellow for reckless tackles.
Cahill demanded even greater work rate in the second period. They crowded the Waterford forwards at one end and left plenty of room for their own. Dean Beecher’s full length save thwarted Morris in the opening half but the Déise couldn’t cope with the runners from deep and the goal was coming.
Bowe’s first three pointer, when he was left completely unmarked in the large rectangle, opened the floodgates. And the scoreline could have been a lot worse as Andrew Ormond crashed a shot off the crossbar and Tipp hit three bad wides in injury time.
It wasn’t a level playing field to begin with.