“They’re all Waterford players in my mind” – Stephen Gough 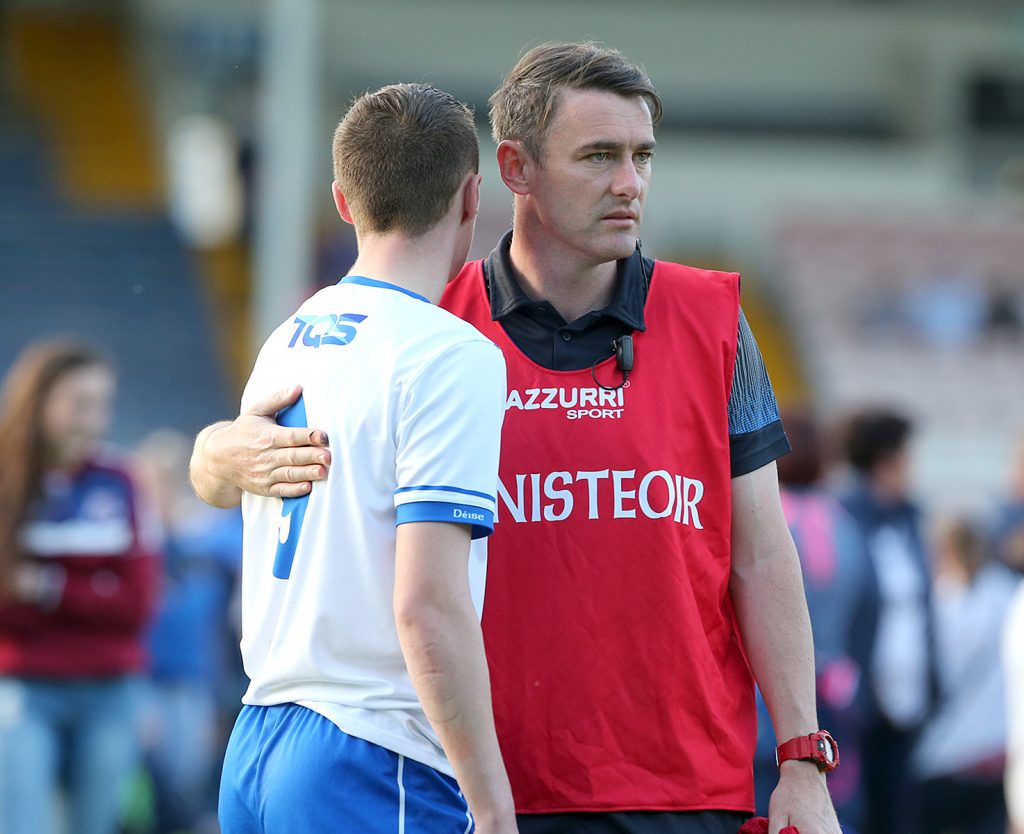 The absence of a city representative from the Waterford line-up was greeted with surprise when the under 20 team was revealed last Monday night. During his post-match interview, Déise boss Stephen Gough explained that management selected the best fifteen players at their disposal. For various reasons, players from traditional strongholds like Ballygunner, De La Salle and Mount Sion opted out this summer.
“We had a couple of city players at the start and they were injured. We couldn’t play them. A few other players were on the panel early on and they stepped off to go travelling. Then there was a good number that were invited in for trials and they didn’t commit to us. They had other things going on with exams and a lot of them knew they were travelling.”
The Roanmore man was at pains to point out that the team was based on form not geography. “It’s not something I noticed picking the team until Sunday evening when someone told me there was no city players on it. We’re picking the best fifteen players; I don’t pay attention to what part of the county they’re from. They’re all Waterford players in my mind. You would have liked to have the few other players that were unavailable. That’s the way it was. We had what we had and we went to put our strongest fifteen players on the field.”

PREPARATION A LONG WAY BEHIND
The Waterford under 20s were playing catch-up on Tipperary even before the ball was thrown in last Tuesday night. A late managerial appointment on February 18 meant that it took until May for Stephen Gough and his backroom team to finalise a panel for this fixture. That came back to bite the visitors and Gough acknowledged that they faded badly in the second half.
“You could see the difference in conditioning between the two teams there tonight. We’re a long way behind them. That’s where the four or five months extra preparation pays off. We were trying to cram hurling, physical work, tactical work and pick our best fifteen all in the one go. Tipp had months to do all that conditioning work first and then take it step by step. We were trying to do it all in one go.”
Tipp outscored them 3-12 to 0-5 in a second half that seemed to last an eternity. That was down to the Premier’s superior physical preparation in his view. Waterford packed in as much as they possibly could. “You couldn’t fault them for effort within the few weeks we had. We didn’t have enough time together. The conditioning and physicality was what won the day. They wore us down. We are nowhere near in the condition that they’re in. That saps the energy out of you. In the second half, we started to make simple mistakes just due to tiredness really.”
As the game drifted away, he decided to give a couple of the dual players a breather. “We just got tired and wore out and we had a couple of injuries coming in. You shouldn’t be mindful of the football, we were out to win a hurling match, but you’re looking at is there one of the football lads that can come off to save them for Friday night. It became obvious in the second half that the game was slipping away from us.”

TWO YEAR PROJECT
He still sees this as a two-year project. “It is but we have to be back early next year and get the conditioning into them. If we come back late again next year, we could be under pressure again. There’s a lot of young players who are underage again next year and they got the benefit of a good serious test in a championship match tonight which I think should stand to them next year. We need to make sure we get the conditioning into these fellas, there’s no point going in undercooked in a championship match.”
Despite the 22-point margin, there were still some positives that he could take from the wreckage. “We had a couple of great individual performances; a lot of the younger lads really went well. They didn’t show any fear tonight. This is an experience that will stand to them over time and hopefully they can put it to good use next year.”
Seven of the 2018 minors saw action in this semi final. More than half of the panel are eligible for this grade in 2020. “There’s a good crop that are available for the next two years as well as fourteen or fifteen that are under next year.”