View From The Green Room: Christy Moore at Theatre Royal 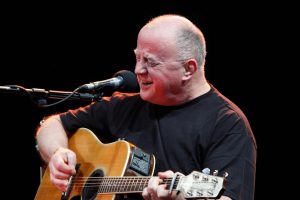 Christy Moore was in stupendous form during his latest Theatre Royal gig.

Christy Moore has that gift that all singers want – an identifiable voice. Close your eyes and you just know that it’s Christy singing.

There’s a comfort in the Kildare man’s voice. It’s deep, soothing, reassuring. Like your father singing to you when you were upset. Or your grandfather singing away to himself. Because that’s… well…that’s what he always did when he was in his own space.

When Christy sits down to sing, he’s always in his own space. And you can forget the folksy off-the-cuff makin’-it-up feel to the evening because Christy Moore is the complete professional.

He’s already been in the theatre since 5pm, checking sight and sound levels and looking at the lighting against that magnificent medieval back wall of the stage with its old postern door that led Waterford folk outside the city walls. If it’s history you want, it’s all here in spades.

Christy Moore’s stage-persona is just right. Intimate and informative, Christy’s got a backstory to all his songs.

Like Yellow Furze Woman that remembers the intimacy of the courtship of Christy’s soldier dad who came to Tramore on manoeuvres during the war and met Christy’s mother who, at that time, was working in the Majestic Hotel, Tramore.

“There must have been plenty of manoeuverin,” smiles Christy “because they had their wedding reception in the Majestic. And guess who came along to join them nine months later” says he as he pumps his fist in celebration of the two most important people in his life.

There’s always the feeling that Christy’s drilling down deep into the heart’s core of the ballad. You can feel the exasperation when he’s looking for answers…where is the love I gave to Nancy Spain?… why deny the ordinary man’s humble wish for ‘nothin’ special, nothin’ grand’ or the reason he was ‘wishin’ he was back home in Derry’?

He misses Katie Reilly’s although he reminds us that his very first Waterford gig was in the Royal and he just loves the place – 1974 and I was there – Christy and Dónal Lunny and Liam Óg and the rest of Planxty and the place rockin’.

The ‘Raggle Taggle Gypsy’ pounds out and ‘Only Our Rivers’ in a sort of plainful lament to their first Polydor album.

“We had a £50,000 pound contract and we never saw a penny of it,” Christy once told me back in my student days.

He’s remembering them all now: Paidí Maloney, Seán Potts and the Chieftans. And Paddy Reilly…’ and how did the “Fields’ not make it to Ireland’s greatest ballad…Jesus’ offers up a baffled Christy. You weren’t the only one who was baffled, Christy. Sadly, these programmes are more about the contributors than the content. Don’t get me started.

With Christy and his tent and his six creamy pints and amadáns and bodharáns and the Tulla and the Kilfenora, Miko Russell, Doctor Bill, Willy Clancy, Noel Hill. I don’t know the half of ‘em but I feel as if I’ve been a butty all my livelong days.

If it’s possible to capture the magic and ordered mayhem of the Lisdoon Festival in one song, Christy does it with his “amhráns, bodhráns, amadáns, Arab sheiks, Hindu Sikhs, Jesus freaks, Van the Man and Mary Lou”.

And above all, Christy Moore and ‘Paalllllanxty’ too. Christy sold out for his two night gig on the Mall. Sure why wouldn’t he?