In 2012, local man Alan Corcoran became the first person to run a lap of Ireland by completing a marathon every day for 35 consecutive days, where he raised €15,000.

In 2017, following the death of his father Milo, Alan made an attempt at being the first person to swim the length of Ireland, some 500km, but the attempt failed when after 210km, the support boat sank and the attempt was halted. Alan managed to raise €13,000 following this attempt.

On June 1, Alan made the decision to reattempt the 500km swim and he is now well into his swim home to Waterford from the Giant’s Causeway. And he’s due to complete his swim this Sunday, July 21 (6pm) with a 600-metre swim of Tramore Beach, to which Alan is inviting swimmers to take part in the final stretch of an epic adventure.

All proceeds raised from the 500km swim will be donated to the Irish Heart Foundation and the Solas Cancer Support Centre.

This swim is a test of endurance and tenacity, with Day 40 seeing Alan swim for six hours straight in the dark, his longest swim to date. Alan is accompanied by his girlfriend Karolina, who is paddling alongside him in the kayak.

Alan is driven through the long swims, jellyfish stings and tough conditions by the memory of his father, Milo who “was a passionate guy, quite strong-minded and determined”.

When Milo recovered from a stroke in 2011, Alan recalled how his father “went from being in a hospital bed to being able to get his independence back”.

Alan is on the home stretch now, having crossed into Wexford on July 11th and he’s appealing to members of the public to join him on the final stretch of his swim home this Sunday evening.

Entry is €20 and all ages are welcome to swim some or all of the 600 metres. Sign up on www.marathonman.co to register for this fun event, the swim date is expected to be the end of July but Alan is regularly updating his Facebook page ’35 Marathon Man’ with his journey. 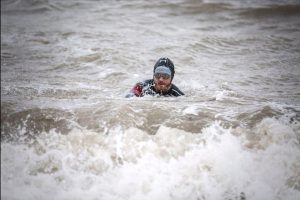