Government denies economy on the ‘cusp of overheating’ despite Brexit warnings

The Government has denied the economy is on the “cusp of overheating” despite a financial think-tank warning Brexit and other challenges could bring Irish growth to a shuddering halt. 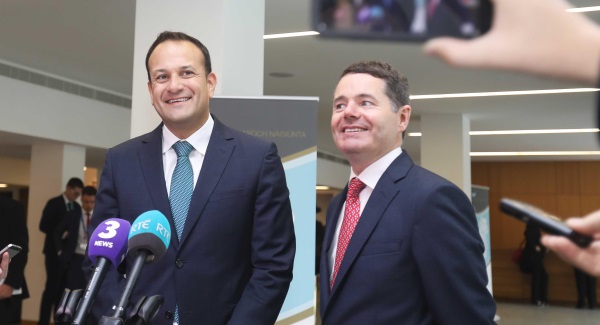 In its summer 2019 quarterly economic observer update published this morning, the Nevin Institute said if there is a soft Brexit, Ireland’s economic growth will be higher than previously predicted.

However, if there is a hard no-deal Brexit as is increasingly feared, the Institute warned the economy is “on the cusp of over-heating” and that growth could slump by 3.3% next year and 3% in 2021.

The prediction by the independent body has led to fresh concerns over the damage a no-deal Brexit could cause.

“Employment growth was an unsustainable 3.7% in the first quarter of this year following growth of almost 3% in both 2017 and 2018.

The economy will be overheating by the end of our forecast horizon, and perhaps even by the end of this year, assuming a benign, or at least delayed, outcome to the Brexit crisis.

“While strong employment and wage growth will drive demands for consumption goods from the household sector, a slow down indicates Brexit concerns as well as an uncertain international trading agreement,” the Nevin Institute said.

However, responding to the prediction, Finance Minister Paschal Donohoe insisted that while the economy is facing challenges, it remains on track.

Mr Donohoe said the Government will address the Nevin Institute’s concerns by “ensuring budget 2020 – when brought in – is inside the parameters that have been recommended by the Irish Fiscal Advisory Council”.

While he acknowledged potential problems which could surface due to Brexit and other matters, he added: “We have an economy that is well run at the moment, we have 2.3 million people at work. The signs that we normally use to look at how over-heating is occurring are not there at the moment.

“Wages are growing sustainably, prices are not growing as quickly as in the past, and we don’t have the kind of rapid increases in lending when we have had overheating in economy.

“But that could change, we need to monitor it carefully,” Mr Donohoe said.

In a separate interview on RTE Radio, Taoiseach Leo Varadkar also sought to downplay the Nevin Institute’s concerns, saying while he was aware them, the economy is still in a healthy position.

Mr Varadkar said he is aware of the need not to over-rely on short-term corporation tax income to the State in order to keep the economy afloat.

However, despite claims his Government is using this income to offset problems in the wider economy, Mr Varadkar insisted this is not the case.