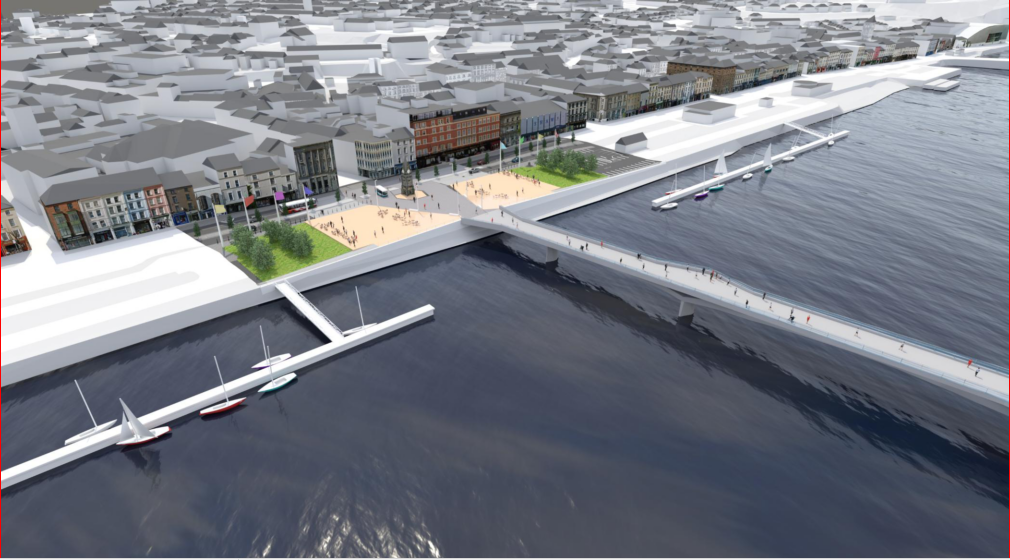 The proposed bridge linking the North and South Quays.

AN BORD Pleanála have sought further information regarding the proposed new pedestrian bridge over the River Suir, but Waterford City and County Council’s Chief Executive believes this will have no impact on the overall North Quays project.

Michael Walsh told last Thursday’s Plenary Meeting at City Hall about the request as well as answering questions from city Councillors about the plans.

Regarding An Bord Pleanála seeking further information, he said: “It’s a very specific issue relating to the vessel protection system on the opening section whereby there are piles in the river to prevent collision with the bridge itself for obvious reasons – to prevent significant damage to the bridge. It is to do with the visual aspect of that protection system.”

The Council will be responding in the coming week or two, while An Bord Pleanála have told the Waterford News & Star that a decision is due to be made in October.

“It has no impact on our timelines in that it’s not on a critical path. We’re continuing our design work on all the elements that are involved in terms of the city centre access and the sustainable transport bridge and the train station. Work is continuing at pace.”

Replying to Fine Gael’s Cllr John Cummins, Director of Services for Planning and Economic Development Michael Quinn said that construction is set to start with preliminary works at the beginning of 2020 and is expected to be completed in the middle of 2022.

Mr Walsh also told Fianna Fail’s Cllr Eddie Mulligan that the tender process for the project’s road access works will behind at the end of this year or the start of 2020 according to the programme’s timeline.

He added that he was satisfied they would receive sufficient funds for the project this year and that they continue to engage with the Government departments regarding the issue.