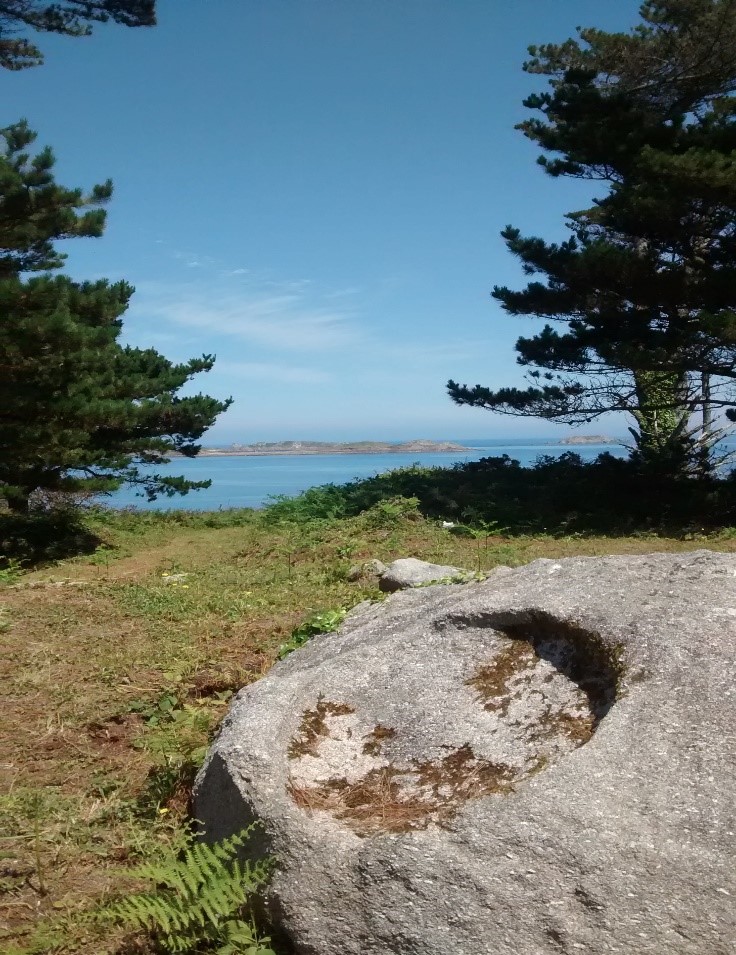 Monterey Pines in the Scilly Isles

A ONE-hour woods ramble of approximately 3km on a smooth, usually dry path. Some history and much of natural interest. Start from the Dunmore park gate where there is street parking. Keep the delightful park walk for another day or add it on when you return. The lone pine tree in the Park is a Monterey Pine of which more later. Head towards Waterford noting St Andrew’s church built in 1818 on your left. Cross the road leaving on your left the Azzurro Restaurant which in a former life was once part of the RIC barrack and enter the woods at the information panel.

The first part of the track comes alive in spring – primrose, daffodil and bluebell. From here the view to the right takes in Councillor’s Strand, named for an 18th century Waterford Corporation councillor. The path eventually goes uphill into a grove of mature beech from where you follow the main path curving leftwards. Continue to the paved road. Cross carefully at the road and enter the Upper Woods.

Near the gate note the stately Monterey Pines, colonized by a parliament of raucous rooks. The Upper Woods provide nice shelter on a windy day. The path eventually leaves the woods and reaches the Coxtown road where a left turn leads back through the village to your start. The road down to the village offers splendid views of the Hook Peninsula three miles across Waterford Harbour. On the seaward side of the road is an area called the Barking Pans, referred to more fully below.

A short detour from the junction marked Cliff Path to the Flat Rocks should be included.

As you enter the village, the large building on your right, now an apartment complex still called the Convent, started life as a summer residence for Lord Waterford. It became a hotel when the harbour and lighthouse were built in the 1820s and eventually the Mercy Convent before being converted in the 1990s to apartments.

The Barking Pans. Here we have an example of how stories die once a name disappears. Fortunately, in 2018 when I investigated the matter there were one or two people in Dunmore who still had the story of the Barking Pans. If the story had not been told then it might have disappeared for ever. There is no sign now of the large stone or metal vat-like pans on the seaward side of the Coxtown road just above the Flat Rocks junction. These were used in the preparation of fishing nets, especially herring drift nets. ‘Barking the nets’ was the term for soaking the nets in hot liquid made from the bark of a tree. The bark used varied from place to place but most often it was an imported compressed product, something akin in appearance to very large bales of peat briquette. The Pans were partially filled with water and the compressed bark added. Fires were set under the Pans and the nets soaked for hours in the cooling liquid. Through this barking process the nets lasted an entire season.

Except for a very short portion as you leave the woods, the walk is in the townland of Dunmore, named for the ‘big fort’, dún mór, a Celtic age promontory fort on the cliff above the Harbour. Coxtown is the adjoining townland to the west and contains a short portion of the walk. The name has a fanciful story to explain its origin. A rooster, a cock, was heard to crow out three times at which a fireball appeared over the place. Whereas John O’Donovan for the first ordinance survey in 1839 opined the name came from Coilleach meaning a woody place. Surprisingly, Canon Power in his authoritative ‘Placenames of the Decies’ dismisses this view implying his support for the fireball story. Returning to Dunmore for a moment the ‘East’ was added by the Post Office in 1818 to avoid confusion with other Dunmores.

Monterey Pine (Pinus radiata, in Irish Péine Monterey). The species takes its name from Monterey in California. In its native habitat the seeds are released by high temperatures resulting in it spreading to nearby areas. The species is recognized easily through its long needles and very large cones.

These large trees, of which there are about eight scattered throughout the village and particularly the group, already mentioned, at the entrance to the Upper Woods, were planted as ornamental trees probably at the time when Lord Waterford was improving the woods in the 19th century. It is possible that these trees, especially those in the Park, were similar or derived from Monterey Pine found in Cornwall and the Scilly Isles (photo).

On a recent trip to the Scillies I found an abundance of Monterey Pine on rocky headlands not unlike those of Dunmore Bay. The connection with the Scillies is interesting in that the Harristown Passage Grave is also considered part of the Scillies archaeological group of passage graves. There is the story that two were planted in the park to honour one of the Royals who it is said had an amorous attachment to Dunmore. The lady in question is said to rest peacefully in St Andrew’s churchyard.