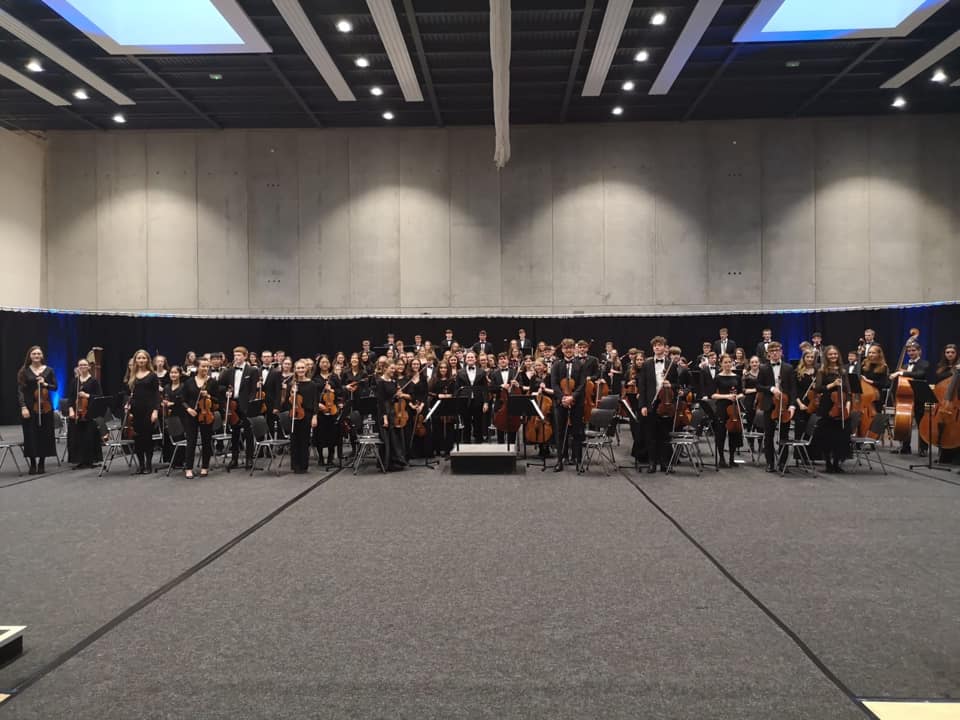 The National Youth Orchestra of Ireland at WIT Arena

IT’S the sea of confident young faces that strikes you first. The National Youth Orchestra of Ireland are in town, courtesy of the Symphony Club of Waterford, for what will be a busy, bustling, big-band ballyhoo of a concert. 110 of the finest young classical musicians in the country. Assured, talented, dynamic with a sound that would awaken a deaf man in a coma on Ballybricken.

There’s no one on board that hasn’t got years of classical training and whose parents haven’t made many sacrifices to get them to this stage. The NYOI has three core values: to provide an opportunity for young Irish musicians to engage with music professionals; to promote equal access and overcome financial and geographical barriers encountered by young Irish musicians and to promote classical music to audiences and communities at home and abroad. Watching this sea of young talent tonight fills me with pride because it’s not so long since it was virtually impossible to find music teachers of sufficient standard to pass on their knowledge. Our only player from the Déise this year is the richly talented Fódhla Dunne from Tramore but the WIT School of Music has played no small role over the years in training young musicians and has supplied superb players to this orchestra.

It’s been quite a journey since the first course in the summer of 1970 when Olive Smith brought together 63 musicians – one of whom I’m delighted to mention was my wife Maeve – aged 14-20 from all parts of Ireland for a residential course at Our Lady’s School, Rathnew, Co Wicklow with the legendary Hugh Maguire as Musical Director. Since then, the NYOI has performed across America and Europe. It has performed in Boston, New York and the Kennedy Centre in Washington; Strasbourg, Luxembourg, Brussels, Louvain, Amsterdam and in Berlin (2000), along with concerts in Hungary, Denmark, Finland and Switzerland. In other words, this is a highly professional and ambitious organisation that reflects the ambition that Ireland has for its musical talent.

Tonight’s concert is a blast. Literally. Did any composer love brass as much as Tchaikovsky and his Symphony No. 2 in C minor boom-booms around the WIT Arena. It’s a symphony that has known success since its first outing in 1872 because the three Ukrainian folk songs that resonate flood the Arena with joy and life. There’s some fantastic work here for soloists. An opening French Horn is rich and mellow, an oboe/piccolo interlude hangs in the air, flute entries herald bigger things and then the fanfares. Those big brassy fanfares are mixed with strings that are so busy that they are in danger of hyper-ventilating.

No matter how many times you hear Manuel de Faya’s Three-Cornered Hat, with its comical tales of love and impersonation, there’s always just always some extra piece of magic to enjoy. The NYOI’s playing of this exciting ballet-score that rips along with Spanish dances from Andalucía is breathtaking. It’s a slow-builder that opens with a soulful oboe solo before those big melodic themes sweep in. Big brassy themes that answer bustling strings burst with excitement across the floor and just make you want to kick off the shoes and get up and dance.

Alberto Ginastera’s ‘Dances from Estancia’ is the Argentinean composer’s calling-card in the concert houses of classical music. It’s rough, brash, and bracingly rhythmic with its driving, asymmetrical rhythm, brass-dominated proclamations and pounding bite-sized tympani solos. Mexican composer Arturo Márquez’s Danson No. 2 gives the young players plenty of opportunity to shine with feature solos for clarinet, oboe, piano, violin, French horn, trumpet, flute and piccolo. This is a piece with a lot to say and Eimear McDonagh’s Harp gives the piece that extra touch of class. Brazilian composer Zequinha de Abreu’s ‘Tico Tico’ has had multiple recordings and is just right to close out the concert.

Venezuelan conductor Christian Vásquez has a CV the length of a bible and is drop-dead-cool. I mean he conducts this band without a score and is just right for a youth orchestra. Blessed with huge dramatic presence and a massive charisma, he pounds through the programme with the personality of a rock-star. As each piece ends, he deflects all applause towards his young orchestra and insists on curtain-calls for his young players. Leader Julieanne Forrest is a sixteen-year-old from Navan and – would you believe it? – already has a career as a soloist and chamber musician.

It’s a joy to hear the NYOI. This orchestra of marvellous young Irish players reminds me of just how far we’ve come in classical music in the last two generations.

The National Youth Orchestra of Ireland dedicated tonight’s performance and tomorrow night’s Dublin concert to the late Karl Kirby; their wonderfully talented and popular double bass player who passed away recently at the too-young age of seventeen. Waterford’s Karl played double bass with the NYOI from 2014 and was a hugely valued member of this orchestra and also with the WIT Orchestra. A very moving tribute in the programme expressed the poignant wish shared by all those who knew and loved Karl: “We wish more than anything, that Karl could be onstage playing with us this evening. We are so thankful for the time we had with him. Ní bheidh a leithéid arís ann.”