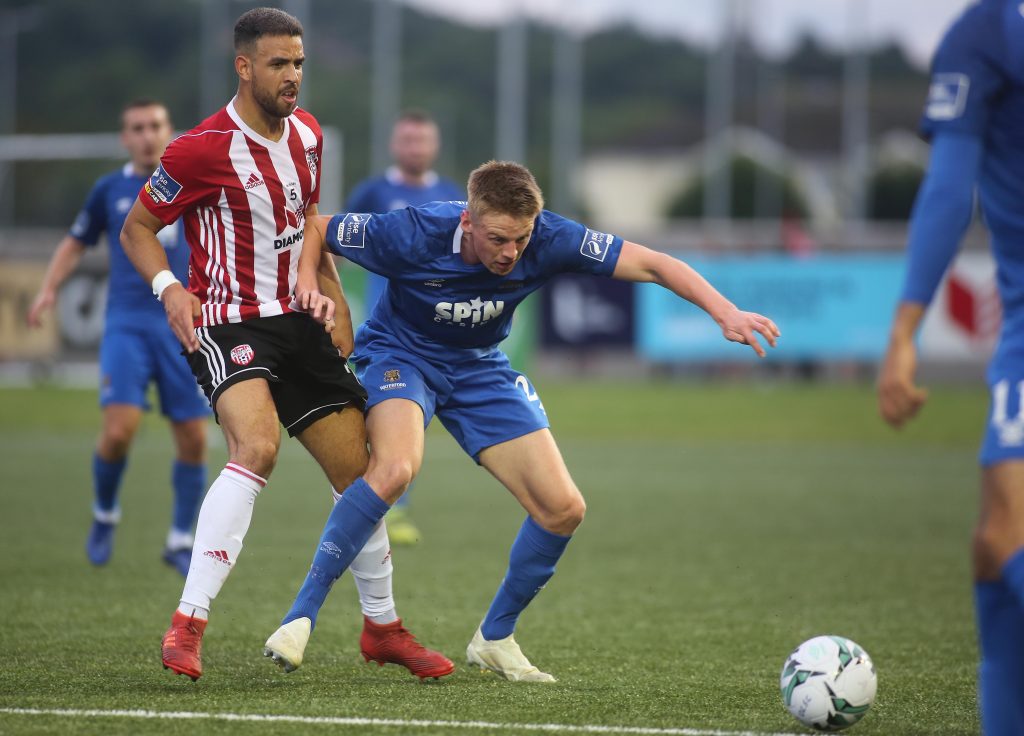 Rob Slevin cuts out the danger ahead of Derry City’s Darren Cole in the Brandywell.

After putting in an excellent display in the heart of the Waterford FC defence in the win against UCD, Rob Slevin showed his versatility when the former Carrigaline United player made the switch back to left-back for last Monday’s game against Derry.
Slevin, who joined the club after starring for UCC in the Munster Senior League, had a difficult night at the Ryan McBride Brandywell Stadium as he came up against an in-form Derry winger Jamie McDonagh, who caused problems down the right-side.
But the Republic of Ireland International was happy with his performance and his hoping that the Blues can get more consistent performances after this flat display against a Candystripes outfit that were the better side on the night.
The 20-year-old was recently part of the Republic of Ireland Universities squad that played in World University Games but has showing that he can make the big step to Premier Division football after winning the Munster Senior League and Collingwood Cup with UCC.
Speaking after last Monday’s game with Derry, the full-back said, “It was a disappointing result for us tonight and we’ll be looking to gain revenge in the cup. We wanted to get the three points here tonight and that didn’t happen for us. We were also looking to build on the confidence after the win against UCD.”

NEED TO WIN
“It’s nice to be back playing for the club after a spell with Ireland, but we need to be winning. We couldn’t do that here. It’s a difficult place to come and get a result, but I suppose the big thing is that we need to move on from this result and look forward to the next game.
“I’d like to think that I’m versatile enough and I think that you’ve seen in that in the last couple of games having to play at centre back and left-back, but wherever I can play really, or wherever I’m needed to play, I’m happy to. It’s just a pity that we didn’t get a result tonight.
“I’m loving the step up from the Munster Senior League to playing in the Premier Division with Waterford and it’s unbelievable. I just can’t wait to be training every day and trying to make myself a better player. I think that we need to start lifting our performances and start to give our travelling supporters something to cheer about.”
The full-back also received the praise from manager Alan Reynolds after Monday’s game. “I look at the performance of Rob Slevin and I thought that he did really good for us. He is a young lad that is making the step up from a lower league and has impressed since he came here.
“He is a player that will get better as the season goes on. He is made of good stuff as well and was a player that I always wanted here at Waterford after I saw him play at UCC. I was impressed with him and he is really beginning to make the step up. His best position is probably left-sided centre back, but he’ll get better.”