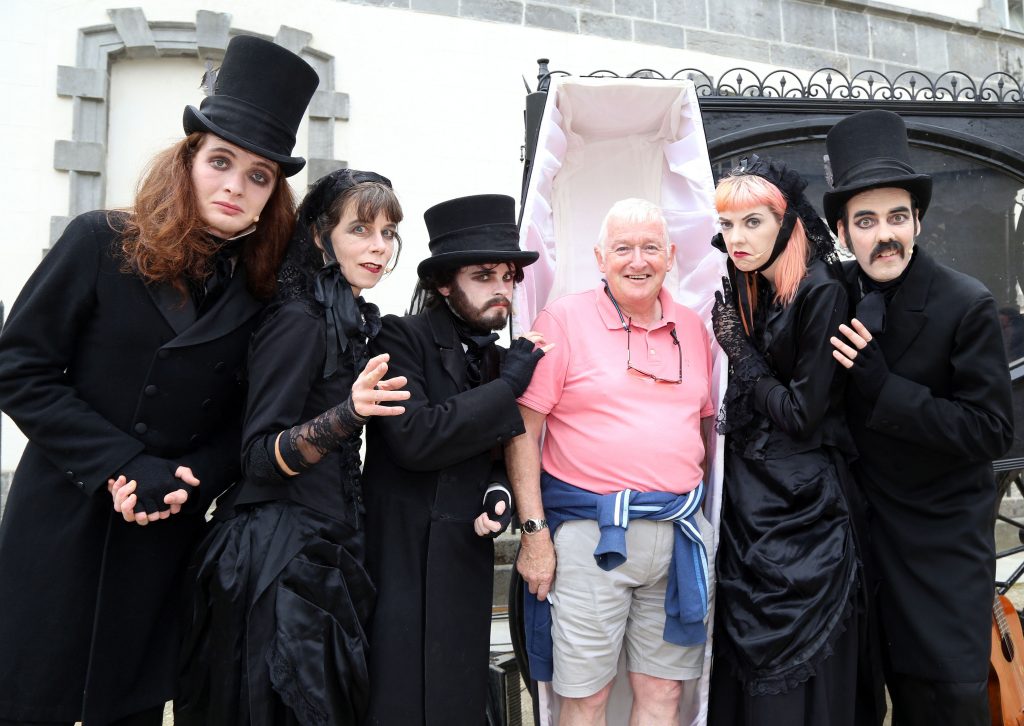 IT’S that weekend when the entire city turns out to party with the oldest form of entertainment known to man on offer. All street theatre needs is a public space, gadgets and gizmos and it’s bring on the motley. Colour is everywhere and costuming is brash and brilliant, gestures are huge and handsome and audience appeal as lasting as the next street corner’s entertainer. Yep… it’s a case of “lots to see so move along there please”.

Spraoi is what a living, breathing, gloriously-alive city should be. Teeming crowds, busy thoroughfares, bonhomie, the smell of charcoal grills in the air. Stalls selling roast succulent pork blaas, calorie-charged chocolate sundaes, burgers, hotdogs and pick-your-own mixes of sweets. Adults craning their necks while making sure their children get a good view of proceedings. And everywhere howls of delight, whoops of approval, and the spontaneous machine-gun fire of applause. Pop-up crowds marshalled by an army of young Spraoi volunteers that make sure the business of the performances gets done. Windows packed with office staff watching, laughing, amazed. Buggies and brollies, undertakers and booming drums.

‘Why do street performers do it? Because they believe passionately that the street is our theatre and that the drama that fills our lives also belongs on the streets. It’s primal. It’s primitive. It’s popular. It’s part of what it means to be a human being.’

And boy do the audiences turn out. It’s estimated that 100,000 people take to the streets to take part in this massive urban carnival where you and the performer often become the act. There’s no point in simply being there; you’ve got to be a vital part of the act. And you get to boo the pantomime villain, sigh with the spurned lover and laugh at the victim. And there’s always a victim for the performers.

In John Roberts Sq. the Sanofi Spraoi Orchestra, led by WAMA’s Conor Walsh, are giving it socks on the drums. All kinds of drums. In fact, more drums than you could shake a stick at. And the WAMA Drummers are at it on Gladstone St. next day. Bongos and bells, kettle drums and drum kits, and dustbins. But it’s the rhythm that grabs you… booming, throbbing and pulsing. It’s an everywhere explosion of sound. Boom-boom. The rhythm of the street being crafted and fashioned into one primal scream that lifts the spirit and creates an anima all of its own.

‘Seeds’ from Síolta Circus are up in John Roberts Sq. also; mixing dance, music, theatre and circus to weave stories of raw emotion out of brute force and light-hearted gags. The ‘Roaring Clubsters’ in chic gingham down in Hanover St. look and sound as if they have just emerged from a smokey speak-easy. They draw big laughs from the good-humoured crowds and, as I happen on them, I can hear the ‘oohs and aaahs’ that explode from the crowd as they engage with their juggling and acrobatics. The kids in the front love it because there’s always something happening.

‘Jetlack’ don’t sound too jetlacked to me over when they follow on. These Rabinovich Brothers come like timebenders from far away in space and time. Their suitcase brings laughter, magic, love and the crowd take to them like Brexiteers to the unknown. Down the Quay at Reginald’s Tower begins the beyond-bizarre stillness from Feathers Ensemble who swap stillness and time-out for the busy life of the city as they assume a variety of poses and places. The ordinary disrupting the normal into the extraordinary. Next day they’re perched on the railing beside, underneath and atop the rail of the seating area of Emiliano’s.

Meanwhile, The Fanzinis have a Spailp tent on Broad St. performing shows for 5 mins for 5 people aged 5 and over. There’s a queue all Saturday afternoon and no one seems to know what’s going on. Two girls in the queue tell me that everyone comes out with a smile on their faces. And they’re going in to find what’s going on. Springtime is a sort of trapeze act on springs that soars into the air in John Roberts Sq. The Always Drinking Marching Band follow on and are jammin’ it with a sort of Tijuana brass sound that’s funky and catchy and has the crowd singing, laughing and swaying along. And the Tamaroos from Italy must be related with their gags, white suits, Raybans, flares and runners that light up as they march up and down to the tunes of ‘Sex Bomb’ and ‘I Will Survive’.

I drift along the streets and the smell of charcoal grills is in the air. The crowds are not going home hungry with that smell of barbeque inviting us to delights that are probably better off left unserved. But Spraoi is not the time for sensible. Outside John Roberts’ house at Cathedral Sq., the boy-soldier John Condon watches throngs of youngsters queue for jellies and teddies, cakes and balloons while a carousel of toddlers turn and wave to adoring parents.

Nick Kavanagh’s Curious State is here in Cathedral Sq. presenting Morbid and Sons ‘Pop Up Funeral Shop’. The crowds love the black humour. And so do I! Teacher Susie Moore from Dungarvan CBS is a crowd-pleasing snappy corpse-victim that gets to sing, dance and own her own coffin and shroud. Nick says Suzie’s in the Guinness Book of Records as the only woman who could fart the theme tune to Coronation St. Suzie is a game performer and she launches into a Britney Spears parody of ‘Kill Me Baby One More Time’ with Curious State from inside her coffin. Brilliant.

As I leave, the crowds continue to pile into the open thoroughfares of the city-centre. There are musicians wandering around with tubas and flugelhorns, crowds boppin’ and swayin’ to hoppity-flea rhythms and kids wanting to know what’s at the next street corner.

Why do street performers do it? Because they believe passionately that the street is our theatre and that the drama that fills our lives also belongs on the streets. It’s primal. It’s primitive. It’s popular. It’s part of what it means to be a human being.

And it’s in the Déise DNA.