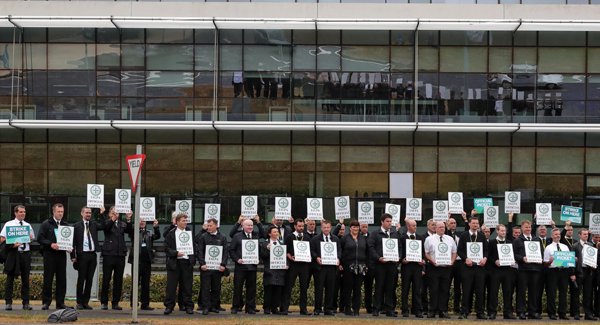 Irish Ryanair pilots have given notice of a two-day strike to be held next week.

180 pilots who are part of the Irish Airline Pilots’ Association (Ialpa) will hold a 48-hour strike from midnight on August 22.

Trade Union Fórsa and the airline had been in mediation talks this afternoon in an effort to resolve the pilots’ dispute.

However, no progress was made in the talks, which were facilitated by mediator Kieran Mulvey.

The Ialpa had submitted a 30-page proposal to Ryanair management in March of this year which sought improvements to pay levels and structures, in addition to proposals on pensions and working conditions.

A spokesperson for Ryanair said this evening that the parties withdrew from the mediation talks after no progress was achieved on Fórsa’s “unrealistic and unimplementable pay proposals”.

The airline’s Pilots Committee and Fórsa confirmed that they are seeking pay rises of 101% on top of current pay of over €172,000 a year.

Ryanair has called on the pilots and Fórsa to return to mediation talks with “reasonable proposals which reflect the falling airfares and profits Ryanair has recently reported”.

Ryanair’s Chief People Officer Eddie Wilson said this evening: “We have done everything in our power to avoid disruption to our flights and our customers’ holidays.

“However, no company can concede to grossly unreasonable demands from its highest paid workers for a further pay increase of over 100% (when they already agreed and received a 20% pay increase earlier this year) at a time when the airline industry is in crisis.

“Ryanair pilots who are already among the best paid workers in Ireland are now threatening to disrupt the holiday travel plans of thousands of customers over the coming weeks as they demand that their pay be increased from €172,000 p.a. to over €347,000 p.a. that would see them earn more than the President of Ireland or our Taoiseach, even as Norwegian makes all of its Dublin pilots redundant.

“We remain willing to engage in Mediation with our pilots and Fórsa but call on them to avoid disrupting our customers’ travel plans in pursuit of what are clearly unrealistic and unimplementable pay proposals.”