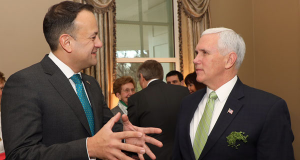 US Vice President Mike Pence will travel to Ireland next month on behalf of President Donald Trump, the White House has confirmed.

Mr Pence, who was invited to Ireland by Taoiseach Leo Varadkar during an event in the US on St Patrick’s Day, will travel here on September 6.

His visit will focus on the United States’ “commitment to maintaining peace, prosperity, and stability in Ireland by upholding the Good Friday Agreement”, the White House said.

Discussions on expanding bilateral trade and investment and strengthening the economic relationship between both coutries will also be held.

The Vice President’s trip will follow two days spent in the UK on September 4 and 5, also on behalf of Mr Trump.

The aim of that stopover will be to discuss the trade relationship between the nations after Brexit.

Efforts on how to respond to “Iranian aggression in the Middle East” and “addressing the threat of Chinese malign influence”, including the development of 5G networks, will also be tabled.

The announcement comes after the speaker of the US House of Representatives warned that there is “no chance” of a US-UK trade deal succeeding if Brexit jeopardises the Good Friday Agreement.

Nancy Pelosi said that the Democrats will block the deal in Congress if the UK’s departure from the EU “undermines” the peace accord in Northern Ireland.

Ms Pelosi said: “Whatever form it takes, Brexit cannot be allowed to imperil the Good Friday Agreement, including the seamless border between the Irish Republic and Northern Ireland, especially now, as the first generation born into the hope of Good Friday 21 years ago comes into adulthood. We cannot go back.

“If Brexit undermines the Good Friday accord, there will be no chance of a US-UK trade agreement passing the Congress.

“The peace of the Good Friday Agreement is treasured by the American people and will be fiercely defended on a bicameral and bipartisan basis in the United States Congress.”