Waterford team wheels up for Race Around Ireland

An eight-strong team of Waterford cyclists is busily preparing to hit the road ahead of the 2150 kilometre ultra-cycling Race Around Ireland, which gets underway in Trim, County Meath on Sunday, August 25.

Speaking to the Waterford News & Star, Team Make A Wish member Michael Garland said: “We hope to be back on Trim by Wednesday (August 28) so you’re talking about three and a half days of non-stop cycling distributed across the team. It’s going to be a big challenge, a real adventure for us all with a competitive edge to it and a fantastic cause in Make A Wish benefitting into the bargain. All things going to plan we’re going to be coming through Waterford, depending on the wind, some time on the Tuesday (August 27) and we’re all really looking forward to it now.”

Michael, who is Chairperson of Waterford City’s Tidy Towns Committee, explained how the team’s participation came about.

“I cycle with the Waterford Biscuit Club and George Pepper, who is also a member of the club, did the Race Around Ireland in both 2016 and 2017 for DHL and Aoibheann’s Pink Tie (the National Children’s Cancer Charity). So towards the end of last year, we were all looking for something big to take on and one particular day, when George and I were out on a cycle, we spoke about taking on the Race Around Ireland. I liked the sound of it straight away but I said we should be putting a team in to win it. I didn’t fancy taking something on just to take in the scenery so the planning began at the end of last year and we’re entering an eight-person team made up of seven men and one lady. We also have four cars and four support crew so you’re talking about a total team of 12 and if we can average between 20 and 30 kilometres an hour, we may well have a chance of winning the whole race altogether. There are around 40 teams taking part, and you’ve got individuals, pairs along with teams in fours and eights. We think the quickest way around is via an eight-person team which means there’ll be less stress on individuals. It’s quite the race. You’re talking about continuous cycling, covering 2150 kilometres around the country. And I’m going to be cycling through the night!”

When asked if he’d volunteered for the nocturnal leg, Michael Garland replied: “Well the way it works is that, in effect, we’re doing a relay to spread out the whole distance between the four cars and we will all have a mixture of daylight and night-time cycling and during the night time cycling you must have a car behind you all the time, lights on the bikes, luminous jackets, all the safety precautions and so on and so forth. For instance, we’ll be going up to Mount Melleray from Cappoquin and from there down into Newcastle (South Tipperary) and that hits 17 to 18 per cent in terms of gradient and I think we hit that at night time. So year, it’s certainly a big challenge!”

Among the support crew is Tricia Quinn (a Dunhill resident), who is the South East Co-ordinator for Make A Wish, and Michael explained why they’ve thrown their efforts behind so worthy a cause. “Well, having seen what Make A Wish do, we felt we wanted to do our bit for them and then of course we realised that it’s an all-island charity so as we go around, we’re going to have Make A Wish families supporters come out and cheer us on too. It’s a big task, a big effort, a huge amount of sponsorship is needed. RS Connect has sponsored us; the company has since left Waterford but they did for us that before they left. The Versatile Group, Moynihan Couriers, DHL and VR Immersive Education have also been fantastic, and we’ve had support offered in terms of fuel and accommodation. It really has been a great effort and without the support of our sponsors, we couldn’t have taken on this challenge in the first place. Team wise, we’re all good cyclists, we’re all good friends and it’s something we’ll look back on in years to come and be very proud of taking part – and hopefully winning.”

The physical effort to get race ready has been considerable, according to Michael. “I’ve been putting in between 400 and 450 kilometres a week in training and that’s a long way away from where I was at when I started off cycling seriously four years ago when I could barely get from the hospital (UHW) to WIT at Carriganore, so I’ve come some way since then. But we’re all after lifting our levels to get ready for this. We’re all keen cyclists – you’d have to be to take on something like this – and when we threw the word out about doing this, we got a great reaction. And training has been going really well.”

Preparations went up a few notches within the past month as the team took on a night cycle: a return trip between Waterford and Carrick-on-Suir.

“We left Carrick at around 11.30pm and cycled down the back road to Waterford, over to Ferrybank and Slieverue and that really was the first dose of reality in terms of what we were taking on as a team, both in terms of the cyclists and support crew. I’d never cycled in the dark like this and I think everyone found it to be a really peaceful experience. There’s no real noise as such like you’d have out on a regular Sunday morning on the bike. It was really, really enjoyable and it gave us a really good sense of what lies ahead of us.”

And if that trio of days wasn’t interesting enough for Michael, he’ll also have some important family business to factor in during the race itself.

“My daughter, Saoirse, is graduating from the University of Limerick on the Monday of the cycle; we’d been previously led to believe that the ceremony would be held on the Thursday or Friday of that week so that obviously changed things from my perspective. Our plan is to be in and around Derry Airport at 2am on the Monday. So a Make A Wish family member, Mark O’Sullivan, is going to pick me up, drive me through the night, all the way to Limerick so that I can make Saoirse’s graduation at 11am and I’ll then be DHL’d back from Shannon to somewhere in Galway to rejoin the race: in other words, a logistical nightmare! But Tricia put the call out to Make A Wish families and the reaction was just fantastic. And I hope Saoirse appreciates it when I’m old and decrepit!”

During the race, Make A Wish’s Tricia Quinn will be providing hourly updates on the team’s progress. “We’ve a super team and have every chance of winning our category,” she said. “This event is going to make such a difference and help us to raise money which will allow us to keep granting magical wishes.”

For details on how to support Team Make A Wish, please visit https://race-around-ireland-2019.everydayhero.com/ie/team-make-a-wish 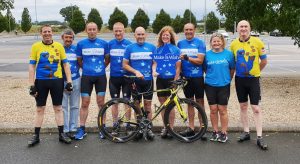 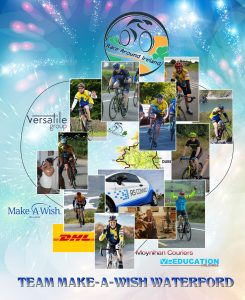