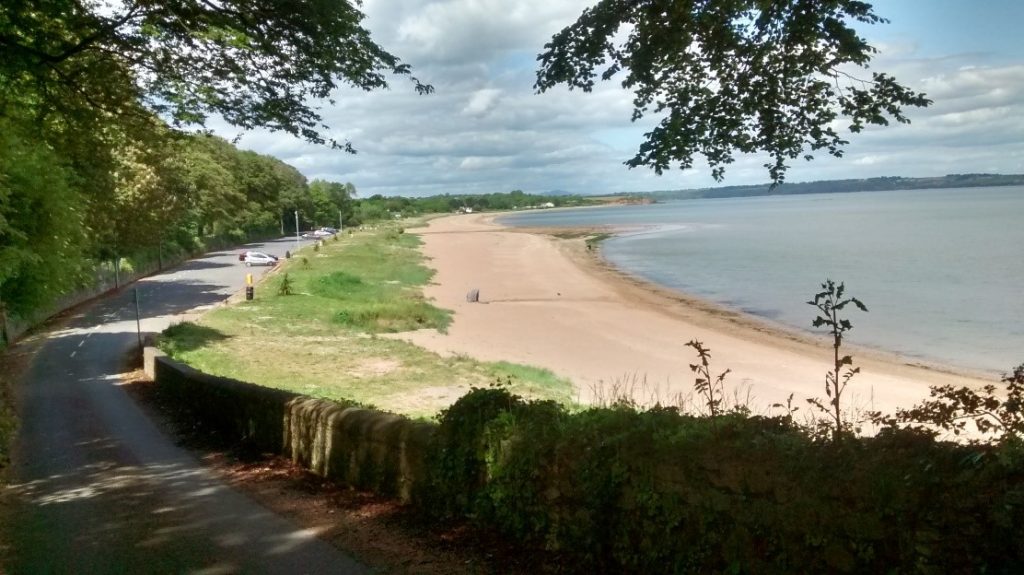 Start from the main carpark at Woodstown Beach, preferably on a falling tide; check your tides app for tide times. Note the oyster trestles loaded with meshed oyster bags about 1km out from the strand – evidence of a thriving oyster fishery here.

Take the quiet road that leads uphill from the southern end of the car park. The start of the walk from Knockavelish hill gives a great view of Woodstown strand and Waterford Estuary (photo). Follow this to a sharp junction as you descend the flank of Knockavelish.

Go left at the junction with views of the sea and Creadan Head drawing you on. The track narrows to a grassy path after the last cottage and this takes you to the beach where care is required stepping down over the conveniently spaced boulders. You are on Fornaght beach which contains traces of trees embedded in the sandy mud. The area between the beach and Creadan Head has recently yielded interesting archaeological artefacts suggesting very early human settlement. One third of the way across the beach turn inland at some white stones and follow the sandy track 200 metres to the junction where a right turn brings you up to a staggered crossroads where you turn right again on to a track known locally as Bóithrín na mBan Gorm. Follow on here and back over the flank of Knockavelish to your start point.

Bóithrín na mBan gorm, the Black Women’s Boreen (gorm means black when applied to people) is a track steeped in legend. According to local tradition it runs from Creadan Head to Fornaght beach and from there on over Knockavelish to Harristown Hill where a late Neolithic passage grave crowns the hilltop. From here segments of old tracks can be traced and possibly linked in the general direction of the Comeragh mountains. Modern logic makes a hypothetical route to Cork implausible. One popular interpretation makes it a slave route (the ‘Ban gorm’ possibly refers to black women, some suggest slaves). Is it more likely to be a smugglers route? Or a ceremonial route linking Creadan Head to the Harristown passage grave? Or could it be as mundane as a route to the beach either for marine manure or to give access to early pilots known as hobblers who worked on the principle ‘first to the ship got the piloting job’? The steps hewn into the cliff face, known locally as the ‘Forty Steps’ at Creadan Head, might lend credence to the pilot theory in the absence of other evidence.

Part of our walk i.e. from the beach to the staggered crossroads and back to the sharp junction on the flank of Knockavelish, follows the Bóithrín. It crosses over Knockavelish Hill and runs down to the main Dunmore-Woodstown road, crossing it to follow a well worn and wide track uphill towards the communication towers on Harristown Hill. From there… it’s speculation, awaiting an Eureka moment.

The walk starts in the townland of Ballyglan – Baile an Ghleanna. The Irish word ‘baile’ continues to be puzzling. Canon Power consistently translates it as ‘homestead’ but Fr Dineen who wrote the authoritative Foclóir Gaedhilge agus Béarla has several meanings for the word, including a land division equal to one thirtieth of a barony. Whatever the original meaning, the ‘Gleann’ is apt since the townland follows the stream-carved valley down to the bay.

Climbing the hill from the car park you are in Knockavelish townland. I always thought the ‘-velish’ was derived from milis meaning sweet but a more thorough investigation opens the possibility that it is named for one Myles for whom Woodstown strand is also named and we find it also as an old name for Belle Lake – Loch Mhilis. The path up from the beach is the boundary between Knockavelish and Fornaght which translates loosely as the ‘bare hill’.

Tides. I have described several walks which have a beach section so a few words on tides now. The best time for a beach section is on a falling tide. So, the time of high and low tides is a vital consideration if you don’t want to be trapped by a rising tide. These times and the height of tide are found in the Tide Tables which can be purchased at coastal locations. A tides app, and there are several, is really helpful so get one for your phone. The high tide varies in height from 3.6 metres to 4.7 metres. The higher levels are named spring tides. Nothing to do with the season, rather with the ‘spring’ in the tide when sun and moon coincide. This happens twice every month. When these are not aligned the tides are weaker reaching the lower height. These weaker tides are referred to as neap tides. One important consideration: at ‘spring’ low water when the tide goes further out you can walk safely around some headlands such as Newtown Head which separates Woodstown Beach from Crooke and Passage Strands or around Knockavelish Head from Woodstown to Fornaght. But always on a falling tide, preferably 90 minutes at spring tides. Spring tides correspond to the new and full moons.