View From The Blue: The joy of running

WEDNESDAY night, August 7. The sun has dipped below the Helsinki horizon and I’ve got my runners on. With a fine day’s consumption and sight-seeing behind me, it was time to burn off a few calories and make a welcome discovery, just a short trot from my hotel.

Beyond a clump of nearby trees, the 1952 Olympic Stadium was made visible only by its iconic tower, which measures exactly 72.71 metres, honouring the distance Matti Järvinen threw to claim javelin gold at the 1932 summer games in Los Angeles.

And while the stadium was regrettably off limits due to its latest revamp, a statue on its periphery stood unimpeded by the latest works, dedicated to the ‘Flying Finn’, Paavo Nurmi, with whom I share a birthday. That commonality was also made known to me on my return home, adding an additional layer of resonance to my trip to the Finnish capital.

Nurmi remains one of the all-time great Olympians, claiming nine gold and three silver medals across three summer games – Antwerp in 1920, Paris in 1924 and Amsterdam in 1928.

Such a tally couldn’t be replicated by the athletes of today since cross-county running also formed part of the Olympic programme during Nurmi’s pomp – a discipline in which he claimed both individual and team victories in 1920, along with 10,000 metre gold and 5,000m silver.

Four years later in Paris, Nurmi remarkably won five titles inside a week, retaining both cross-country titles along with tape breaking successes in the 1500m, the 3000m team event and the 5000m.

To his great frustration, Nurmi was denied a chance to retain his 10K crown by his team superiors on health grounds. Upon his return to Finland, Nurmi, surely fueled by rage in addition to his remarkable physical power, set a new 10,000 metre world record which would stand for almost 13 years.

In what would prove his final summer games in 1928, Nurmi won the 10,000 metre title and claimed silvers in both the 5,000m and steeplechase.

He was denied a shot at a 10th Olympic gold in Los Angeles in 1932 (where Ireland’s Pat O’Callaghan and Bob Tisdall both topped the podium) after the IAAF, the governing body of world athletics, deemed Nurmi a professional.

When the games came to Helsinki in 1952, it was fitting that Nurmi was the final torchbearer and lighter of the Olympic cauldron. He died in 1973, aged 76, his legacy and legend recognised the world over.

That Nurmi’s statue was revealed to me while out on a run, adjacent to a stadium where both Eamonn Coughlan and Sonia O’Sullivan had memorably claimed World and European titles in 1983 and 94 respectively, provided me with an additional rush.

I was never remotely talented enough to operate in the white hot theatre of major championship athletics but it remains the sport in which I achieved my greatest level of individual success. In a sporting sense only, running defined my adolescence.

During my teens, I was a reasonably competitive middle to long distance runner, proudly wearing the colours of Ring Old Parish and West Waterford Athletics Clubs, in addition to Carrick-on-Suir CBS.

My schooling provided me with an athletic ‘dual mandate’, running for my native Waterford at club level and Tipperary in colleges’ track and cross country meetings.

Such a status was something that my late father Johnny, Déise born and bred and son of two Tipperary parents, was particularly proud of. Being a sporting mongrel rested easily on my adolescent shoulders, and that I also wore the Munster vest on one occasion – at Ballybrit in 1996 – remains something I’m very proud of. I just wish I’d held onto the singlet in retrospect. I thought I’d get a chance to pull on the blue vest again thereafter but a shift in my own sporting focus and the social joys of third level life meant whatever athletic prowess I possessed only throve within a relatively narrow window.

However, the simple pleasure derived from running never truly left me. Granted, I had lengthy spells throughout my 30s in particular when I didn’t run with any great level of regularity but I still managed to clock in two marathons, Cork in 2010 and Edinburgh a year later. I covered both courses in similar times – 4 hours 45 minutes in Cork with four additional minutes on the clock in 2011 – and while I’m glad I ran both, I’ve no great desire to repeat the 26 mile, 385 yard trek again.

On both occasions, I wanted to prove to myself that I had enough gas in the tank to get around, and ticking that box proved a sufficient achievement in itself for me to not run another one since.

But like all marathon runners, until such time as the lungs and joints dictate otherwise, I cannot categorically say never again.

Perhaps the imp on my shoulder will one day whisper “come on Keyes, you can do this in four hours” and I’ll grit my teeth and bend to my competitive instincts once more.

But for now, extending myself to a six mile run every fortnight, while clocking up plenty of three to four mile runs in between, is giving me what I need.

Running is still fulfilling a purpose for me, albeit somewhat different from my teens when I once broke the five minute barrier for the mile. At the age of 40, I can’t believe that I was once that fast.

Coming from a county with such a gilded athletics tradition – the names of John Treacy, Gerry Deegan, Jamie Costin, Kate Veale, Joe Gough, Kelly Proper, Thomas and Jesse Barr immediately spring to mind – running remains the sport I am most wedded to by still engaging in it. Before the short evenings set in, I may even run in a race again, something I’ve not done for eight years.

Who knows, my meeting with Paavo Nurmi might just have rekindled a spark I’d not previously reckoned upon. Either way, I know I’ll keep on running. There’s nothing else quite like it. 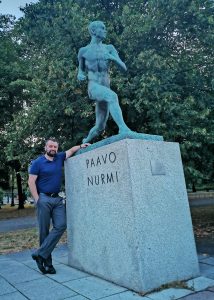