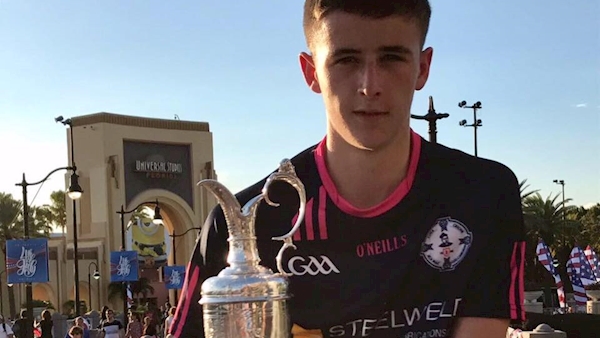 The Irish golf fan who was left “battered and bruised” after a lightning strike hit him during a PGA Tour event in the US said he only realised what had happened to him after paramedics strapped him into a spinal board.

19-year-old Ryan Murphy from Co. Tyrone student was one of six golf fans who were injured by lightning strikes in Atlanta, Georgia on Saturday.

He has now returned back to his home Cookstown, Co Tyrone.

Describing what happened last Saturday, Ryan Murphy told RTÉ Radio 1 that he remembers walking across the course to a fan shop before waking up on the ground with his ears ringing.

“I don’t remember much of when it actually happened,” he said.

I was walking across to a fan shop and next thing I had fell to the ground. My ears were ringing. Whenever I woke up I was surrounded by people and there were ambulances. It was just very chaotic.

Ryan was treated by ambulance staff at the scene before being rushed to the trauma centre of a local hospital.

“Whenever I woke up I thought I’d just been unconscious and I felt like I could stand up and walk away. Then they told me that I had been struck by lightning and once they put me in the backboard I realised how serious it was. I just let them do their job at that point.”

Ryan said the weather at the time of the lightning strike was calm, which is why he walked across the course.

“The weather wasn’t too bad, there was a tiny bit of rain and then it stopped. That was when I decided to walk from where I was over to the fan shop. As I was walking the lightning struck.”

Ryan’s father, Terry, was watching the PGA Tour event on television at home in Cookstown and immediately tried to get in touch with his son.

“I knew he would be watching it on TV and I think when he realised I wasn’t returning his phone calls that I had been involved. Eventually, he got a hold of me when I was in the hospital,” Ryan said.

Ryan was in the hospital for about seven hours before being discharged.

“They were just monitoring everything that had happened. It wasn’t until I got a CT scan that I was free to go.”

A fan of Rory McIlroy’s, Ryan was following him on Friday and Saturday and planning to travel across the US the following day.

“I was working at a summer camp as a lifeguard. I was supposed to be on a flight the next day to San Francisco, LA, Las Vegas and then to New York before I got home but it was cut short.”

Ryan said he hasn’t had any major side effects from the lightning strike, mainly a lack of sleep and some headaches.

“I just haven’t really slept, that’s really been it… a few sore heads but that’s about it.”