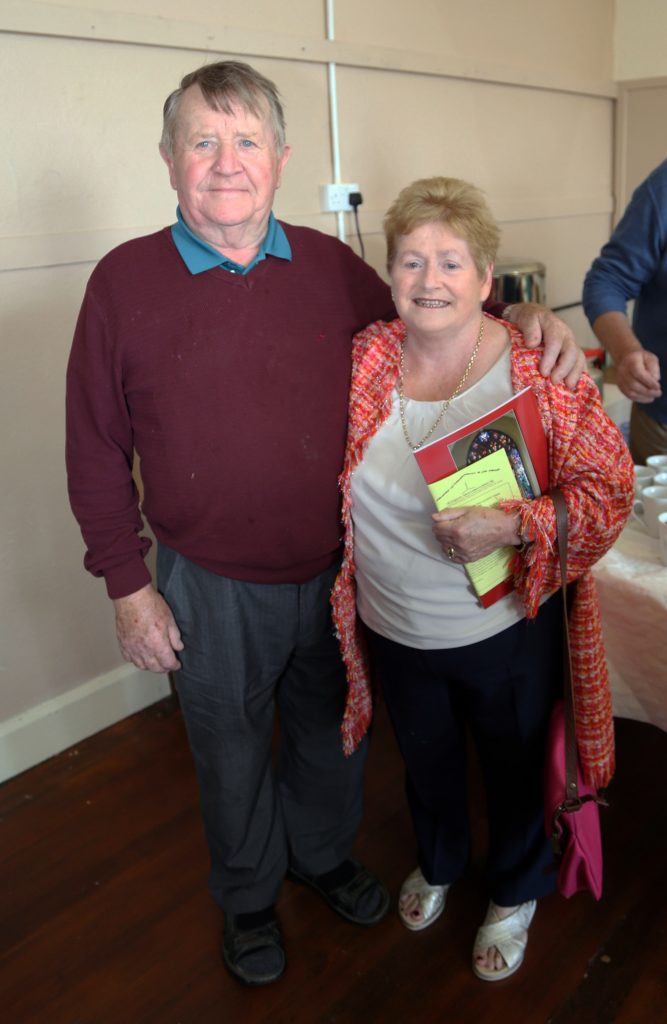 Pictured at The Rufus Halley Centre, Butlerstown, for the launch of “Murder In The Missions” were Danny Kelly and Theresa Cleary. Photo: John Power

ON Sunday, August 11, Harry Whelehan, the former Attorney General, launched a book on the life and brutal murder in The Philippines of Father Rufus Halley, a native of Killoteran, Butlerstown.

‘Murder In The Missions’, written by Jean Harrington, also details the life of the late Fr Des Hartford, who was kidnapped and held for 11 days by the Moro National Liberation Front in 1997.

Mr Whelehan, who was a former classmate of Rufus’s in Glenstal Abbey, spoke of his honour at being associated with the launch, which was held in the Community Centre in Butlerstown named in honour of Fr Halley.

Fr Rufus and Fr Des were members of the Missionary Society of St Columban, which is based in Navan. They spent their lives working on the missions in The Philippines. As this book suitably demonstrates, their stories deserve to be told as they were truly inspirational characters.

We in Waterford can be especially proud of Fr Rufus who dedicated his life to Muslim-Christian dialogue in the Philippines so that both communities could live in peace and harmony and learn from each other.

‘He knew that for dialogue to work, he had to have a good knowledge of Islam and immersed himself in Islamic studies for a year. He also knew he had to learn to respect it and to appreciate the goodness and truth in that culture.’

Even though he knew he was living in a politically volatile situation and that his life was in danger, he persevered as he was passionately committed to this ministry of reconciliation and peace-building. Eventually, Rufus was ruthlessly murdered in a botched kidnapping attempt by an extremist group in August 2001.

The conflict between Muslims and Christians in The Philippines was exacerbated by theological differences but, as in all religious conflicts, it was primarily due to the prevailing political situation. Muslim communities felt oppressed by the dictatorial government of Ferdinand Marcos at that time. Because the ruling elite were perceived to be Christian (Marcos was anything but Christian in his behaviour) local Catholic communities were not trusted by their Islamic neighbours.

Rufus was determined to break down barriers between the two communities.

To accomplish this, Rufus was prepared to immerse himself completely in the life and culture of the Islamic community. He lived for a while with a Muslim family and took a job in a local grocery shop. As Jean Harrington says in her book, “he wanted to walk in their shoes, share their pain, experience their emotions and see life through their eyes.”

Rufus was especially dedicated to the poor and wanted to live in solidarity with them and in particular “to experience the uncertain future they faced each day.”

He made huge efforts to become fluent in the local dialect and was able to converse freely and openly with members of that community. He knew that for dialogue to work, he had to have a good knowledge of Islam and immersed himself in Islamic studies for a year.

He also knew he had to learn to respect it and to appreciate the goodness and truth in that culture.  He realised that he himself would have to acknowledge his own prejudice and bias and to receive his brother and sister Muslims as equals.

Rufus realised very early in his mission how much Christians and Muslims share in common. We worship the one God, the God of Abraham, who is the creator of the universe. God has revealed Godself through God’s prophets and through God’s word. (For Muslims, the Koran communicates the Word of God; for Christians, it is of course Jesus Christ.)

Muslims venerate Jesus as a prophet and they honour Mary, the virgin mother. They believe in the resurrection and the promise of life after death.

Rufus was deeply impressed at how devout the Muslims were and how committed they were to the practice of their faith. He learned very early on that the terrorism perpetrated in the name of Islam and all forms of Islamic extremism were a total aberration of the authentic interpretation of the Koran and that Islam was fundamentally a religion of peace.

He was appointed coordinator of the Muslim-Christian Dialogue Group in the region of Mindanao where he lived and he worked tirelessly to resolve conflicts and ease tensions and end the violence in the area.

In his role of director of a secondary school which included a high proportion of Muslim students, he visited their homes and build up relationships with the parents and wider families. This helped to break down barriers and to ensure he was trusted and accepted in the Muslim community.

One of his greatest achievements was to help broker the peace between two warring Muslim clans who were engaged in a bitter feud for many years. The level of violence was escalating rapidly and both sides were guilty of atrocities.

That Rufus, a Christian and foreigner would be trusted to mediate between the warring factions was indicative of the level of respect and trust in which he was held.

He was passionately committed to the liberation of the poor and oppressed regardless of their religious affiliations.

Rufus has bequeathed to us a very challenging legacy. He has shown us how to put into practice the spirit of the Second Vatican Council, which acknowledged that God through his Holy Spirit is active in all great religions, and that the religious convictions of everyone should be respected.

We in Ireland will face the challenge of dialogue with our Muslim brothers as the Islamic community expands and develops. Together we can work for a must just society.

Christians will also have the opportunity to make common cause with Muslims in asking that the state should live up to the pluralism it professes rather than reducing pluralism to secularism.

FR LIAM POWER: A solution to the Housing Crisis?