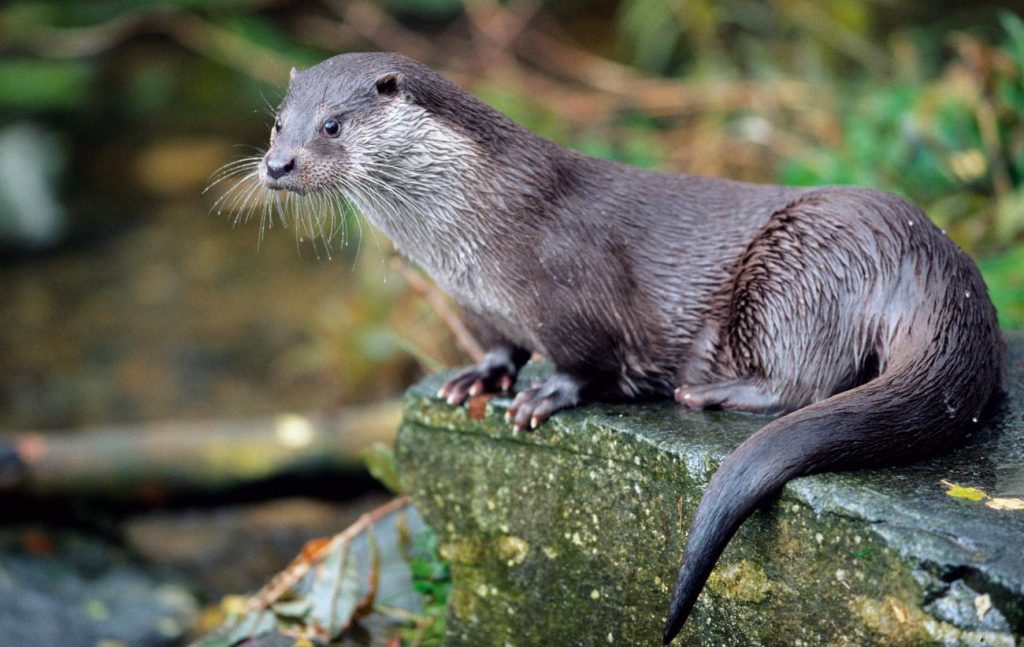 An otter: a thin streak of shiny grey.

A terrific wildlilfe walk with a sprinkle of history. Almost five kilometres of varied terrain over grassy track and paved road with possible detours to Faithlegg Church and Faithlegg Hotel. Easy but  extra care is required over a 300-metre stretch where tree roots and stones appear. Start and finish at Cheekpoint Quay. Head west along the River Road to a terrace of 19th Century two-storey cottages – The Rookery – just beyond the junction to Power’s Hill. On your way note the remnants of a fish weir (photo) with the traditional V shape almost apparent.

Note also the line of rocks extending at right angles to the shoreline, one of the  groins built in 1993 to ‘put manners’ on the river (increasing the scouring or dredging action of the river). Also of note on your left is the whitewashed alcove with seat known as the Summerhouse where 18th Century poet Elizabeth Owens rested and wrote.

Go through The Rookery archway leaving the boathouse on your left. You are now on the Rookery Quay dating from the late 18th Century.

In winter, you are likely to see a variety of waders industriously probing for food at tide’s edge, the blacktailed godwit prominent among them from August to April.

Continue along the marsh track until it begins to turn inland through the edge of an area of conifers and a reed marsh. This woodland portion requires extra care as the ground is uneven with tree roots.

The track swings down onto a paved road – the Glen Road which you follow to the next junction where you turn left (a short detour is possible from here to Faithlegg House following the finger signs).   Continue up to the main Cheekpoint road where another detour is possible to Faithlegg Church and the burial place of Catherine  Bennet, first wife of Thomas Francis Meagher.

Go left at the Cheekpoint road for about 100 metres and turn left again up the Old School Road. At the T-junction at the top of the hill turn right and after about 100 metres turn left onto a long gentle downhill which brings you back to the village of Cheekpoint where a right turn and 300 metres further on a left at the Crossroads brings you back to the start point via Dobbyn’s Field, the village park.

There is indeed much more than a sprinkle of history on this walk – the building of the quays, the Cheekpoint-Milford Haven mail-boat terminus, the reclamation of the Marsh and the building of its sea wall, the saga of the Meagher family, the 18th Century residence of architect John Roberts, Faithlegg Church and its 15th Century ruin, St Ita’s Well, so many intriquing stories. Here there is room only for one, leaving the others to be told on another walk.

Cheekpoint was the Irish terminus for the mail boat service to and from Milford Haven in Wales between 1787 and 1813.

An initiative of the enterprising local landlord, Cornelius Bolton, Jnr, the Packet Service operated a number of fast cutters powered by sail. It also carried passengers. As was the case later in Passage and Dunmore to where the service transferred a stagecoach brought the passengers and mail to Waterford.  However, the service was subject to the vagaries of wind and tide and in order to secure a more predictable timetable operations were moved downstream to Passage East and later to Dunmore.   Eventually, the mainstreaming of steam combined with the deepening of the channel between Little Island and the Kilkenny shore led to the further transfer of the terminus to Waterford city.

For more on this see the wonderful blog that Cheekpoint hisorian, Andrew Doherty publishes monthly under the ‘Tides and Tales’ title.

The origin of the name Faithlegg is somewhat obscure, puzzling even to Canon Power author of ‘Placenames of the Decies’. His best shot is Féidhlinn which he translates to ‘woodbine’, presumably the climbing plant. It’s also found as Fathlock as early as the 16th Century and it’s Faithlegg in the 17th Century. With his accustomed caustic edge he notes about these versions: “they are equally powerless to help”.  Interestingly, Power refers to Meannáin Fhéidlinn – Faithlegg Hill.  Meannáin is thought to mean “rounded with heather”. To locals this is known simply as the Minaun.

Come to the marsh in a warm westering sun on a summer’s evening when the high tide fills its runnels and channels.

Find a grassy bank up from the common cordgrass with its autumn spike of cream-coloured flowers (‘Spartina anglica’; in Irish ‘Spartíneach ghallda’)…and wait.

Presently, you may see a ripple start and then a thin streak of shiny grey – the otter ( Lutra lutra and in Irish Madra uisce).  Fish is what the otter lives on and so,  builds his holt near the water.

A most industrious creature somewhat like the Canadian beaver forever on the go giving rise to an Irish triad – one of the three things that never rested, the others being a steep waterfall and a demon from hell.