THE number of people waiting for homecare support in Waterford rose from 31 in May to 79 by mid-August, an increase which has deepened concerns previously expressed on the issue by Fianna Fáil TD Mary Butler.

Deputy Butler, who is her party’s Spokesperson for Older People, told the Waterford News & Star that the hike is a source of deepening worry.

“In May, we had 31 people in Waterford waiting for homecare support, which was 31 too many, even if that was a lower figure than what the county by county average was at that stage, but based on figures I received just over a fortnight ago, that number has gone up by more than a hundred per cent in Waterford alone during the summer.”

Deputy Butler said that a moratorium on extra hours which has been imposed since the appointment of new HSE Chief Executive Paul Reid was one of the major factors behind the hike.

“He is not permitting any over-run at all in relation to budgets,” she said. “Currently in Ireland there are 53,000 people in receipt of homecare supports; we’re talking about someone who comes into your house on a daily basis and makes it possible for a person to continue to live independently at home with the correct wraparound supports. But at the moment, nationally, there are 6,900 people waiting for homecare supports, so that means one in every 10 people who need support are not receiving it.”

Deputy Butler continued: “The only hours that are available now arise when somebody unfortunately passes away, which leads to a recycling of those hours. That’s the sad reality of where we’re at now.”

The summer has also recorded an unwelcome increase in the waits facing those wishing to enter nursing home care via the Fair Deal scheme.

“Anyone who needs nursing care support can be allowed to go into a nursing home,” said Deputy Butler. “How it works is that you pay 80 per cent of your pension and you pay seven and a half per cent of the value of your home for three years. Now normally when a person is assessed under Fair Deal and accepted for it, they normally find their way into a nursing home within three to four weeks. But I have learned that over the summer these figures have increased in some cases between eight and 12 weeks so we now have people in acute hospital beds in acute Level 4 hospitals who cannot be discharged because they don’t have the proper respite facilities nor do they have timely discharge into nursing homes.

“This is obviously something which I can’t put in a parliamentary question for during the Dáil recess; I have them prepared for when I’m in a position to do so but I’m horrified by the numbers.”

It’s understood that, nationally, between 700 and 800 people are waiting to access nursing home care at a time when Mary Butler says there is capacity in the sector to accommodate them.

As of June 6 last (as detailed in a HSE reply to a Parliamentary Question tabled by Fianna Fáil TD Stephen Donnelly), there were 12 people in Waterford awaiting nursing home placement under the Fair Deal Scheme.

A reply to another ‘PQ’ of Deputy Donnelly’s stated that, as of May 31 last, there were 79 people in Waterford on the Home Support (‘Home Help’) Hours waiting list. This compared to zero in Carlow/Kilkenny, 49 in South Tipperary and an alarming 640 in Wexford. 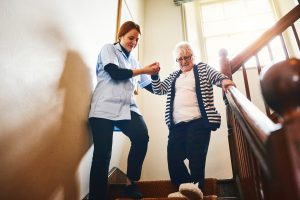