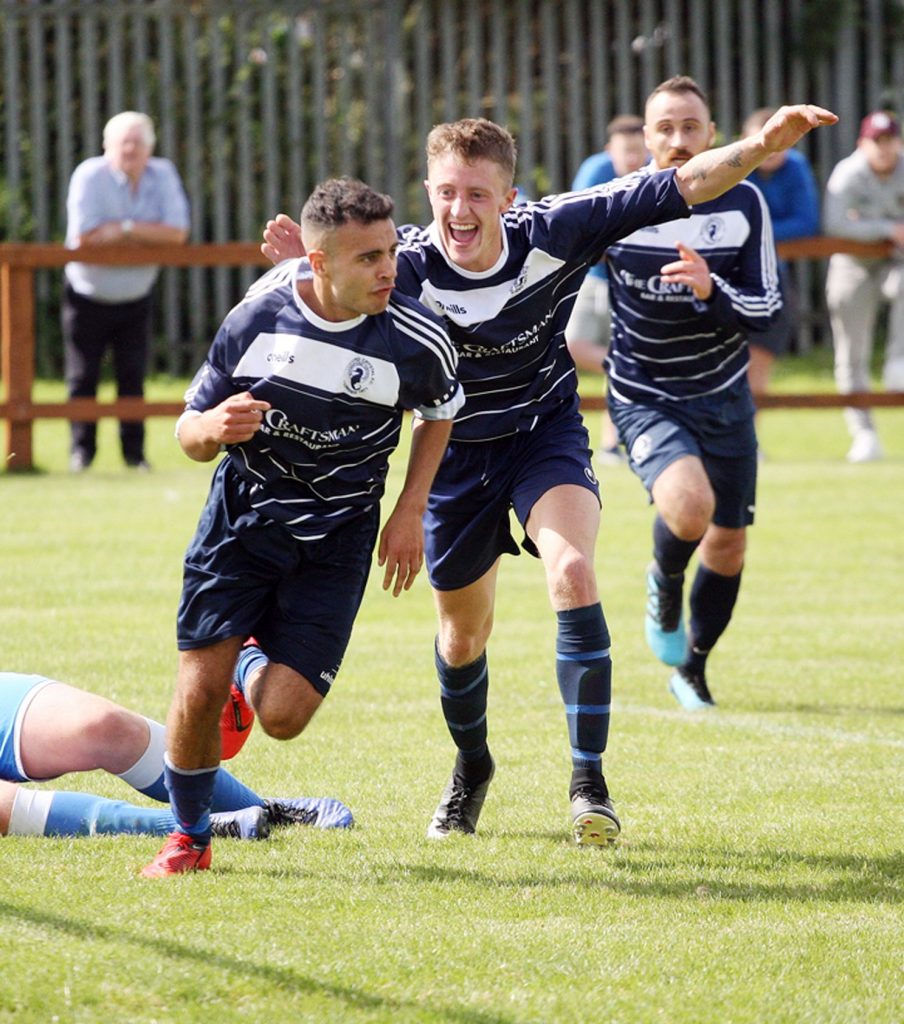 It was delight for Waterford Crystal as Michael Hearne scored against Hibs in the Premier League at Crystal Park on Sunday.

Three goals in the space of four crazy second-half minutes proved pivotal for Waterford Crystal as they made it three wins from three games when inflicting a second defeat of the season on champions Hibernians in their O’Neill’s Premier League clash played at Crystal Park on Sunday morning.
After the home side twice fell behind in the game, they were handed a couple of easy goals by a Hibernians defence that took their eye off the ball on occasions, which once again proved costly, as Crystal continued their amazing start to the season, scoring 15 goals in the process.

EARLY BREAKTHROUGH
With both sides missing players for one reason or another, it was the Mitchell Kennedy Park outfit that struck first with a goal inside four minutes when Johnny St Ledger whipped in a cross from the right that was powered to the net at the front post by Jason Keane.
Sean Whitty made a good save to keep out a left-wing shot from Shane Rochford on eight minutes with Clive Prendergast clearing the danger under pressure from Andrew Power. Aidan Tracey missed a great chance to level four minutes later when he blazed over form 12 yards after picking up a Power pass.
Kenny Purcell turned well on the left-side of the penalty area on 19 minutes, but his shot was just wide of the near post before Andrew Power and Shane Rochford combined down the left channel on the half hour mark, but the latter has his near post shot saved by Sean Whitty.
Crystal did get themselves an equalising goal on 43 minutes when Mitchell Casey played a long ball from inside his own half that wasn’t dealt with by the Hibernians defence and that allowed Andrew Power to take full advantage as he lobbed a left-footed effort over Whitty from deep inside the area.
Jason Keane missed a glorious chance to grab his second goal of the game on 55 minutes when Nathan Brennan whipped in a right-wing free kick that wasn’t clear and when the ball fell to the former inside the six-yard box, he shot straight into the hands of Dean Purcell.
The visitors did regain their lead however just two minutes later when Kenny Purcell cut in from the left-side before he was brought to ground by Jason Phelan that left referee Richie Brazil with little option but to award a spot kick that saw Mark O’Keeffe drill the ball past keeper Purcell.

GOALS GALORE
Michael Hearne should have brought his side level on 73 minutes when he got on the end of Shane Rochford’s right-wing corner kick at the back post, but his header flashed wide before he made amends to draw his side level four minutes later when he blasted home from close-range after a super Andrew Power cross.
That began a crazy period of goals as the Hibs defence were the cause of their own downfall as they fell behind on 79 minutes when a sloppy defensive free-kick saw Rochford dispossess David Cooley before slipping the ball to Power, who in turn fed Nathan Phelan and he beat Sean Whitty with a left-footed finish from 12 yards.
Crystal couldn’t believe their luck as they added a fourth goal two minutes later when Aidan Tracey played the ball into the area from the right-side of the area that saw Nathan Brennan try clear, but he just managed to hit the ball straight off Shane Rochford that took the ball past Sean Whitty.
Hibernians did manage to get themselves a lifeline on 83 minutes when they pulled a goal back as Johnny St Ledger sent in a right-wing cross that picked out the run of Walter Croke at the back post and he powered a header past Dean Purcell.
David Cooley did have one late chance for the visitors to notch a share of the spoils in second half injury-time when he took a pass from Mark O’Keeffe on the left-side of the area, but he fired into the sidenetting before O’Keeffe drilled a free kick straight into the Crystal wall with the final action of the game.