CAPPOQUIN, with a population of 699 as recorded by the 2016 Census, is the largest semi-rural area in Waterford without a residing City & County Councillor.

With that in mind, one suspects it will be heavily frequented by visiting general election candidates once Leo Varadkar makes his trip to the Áras to seek a dissolution of the 32nd Dáil.

Situated on the River Blackwater’s most prominent bend as it flows towards Youghal Harbour, Cappoquin is a well-appointed town not short on charm, albeit home to a Main Street which clearly needs an injection of activity.

Long-term dereliction and property vacancy are not exclusively the preserve of our city, as this newspaper’s most recent visit to Cappoquin and its main thoroughfare offered an unfortunate reminder of.

While efforts have been made by local voluntary bodies to soften the impact created by empty housing (such as the tribute to popular tailors and beekeepers, the late Thomas and Noel Lonergan), the lack of residential, let alone commercial activity, remains readily evident. But so too was the sense of local pride that residents and businesses clearly have in the town and its environs.

With that in mind, it was pleasing to note the Cappoquin Regeneration Company’s planning application to convert Blackwater House (a former pub of local renown) into new office space, in addition to building a new two-storey extension to its rear.

“There were 26 pubs here once upon a time,” a local man standing outside Blackwater House tells me having noticed my notebook and pen.

“This was a very busy street when I was a young fella, sure ‘twas a busy town years ago. The place behind me here was a great spot, all up the street there (to his left) you had businesses like the Lonergans and so on. Good people. All that’s in the past now, and there are things gone from here now that will never be replaced. But sure that’s the way of it in lots of towns the size of this these days.”

Directly opposite Blackwater House, a three-storey house flanking Main Street and Castle Street has been recently renovated thanks to the local Community Council, another helpful step towards hopefully injecting fresh life into the heart of the town.

Aoife Hallahan and Emma O’Keeffe run the delightful Barron’s Coffee House on the appropriately named Cook Street, undoubtedly one of West Waterford’s most popular cafés. It adjoins Barron’s Bakery, a Waterford institution which has been in business since 1887.

“The bakery has been passed from one generation to the next,” commented Aoife. “It has survived as a business here in Cappoquin while so many other local businesses have closed so it’s great that it’s still here. The name was synonymous with the town and the area for so long and has such a good reputation. Emma’s grandfather was here before Esther (Barron, Emma’s aunt) and her husband Joe (Prendergast) and it’s still going strong, thankfully.”

Emma broke into a conversation held over piping tea and a slice of lemon drizzle cake. “It’s a testament to Esther and Joe that the bakery remains so popular; the brand remains so strong and there’s so much value in having a strong and reliable brand. It’s featured on several TV shows in the past few years, where film crews have come in to see blaas being made in the bakery. Now the PGI (Protected Geographical Indication) on the blaa has helped a lot since there are only the five bakeries in Waterford that carry such a distinction, and that brings people down here as well. Plus you also have the oldest (bakery) ovens, the only ones of their kind in operation in Waterford like that so that’s created a draw too.”

Regarding tourism, Cappoquin, Lismore and Ardmore have all benefitted from the revival of the 56-mile Saint Declan’s Way walking trail since 2015, said Aoife.

“That has brought new custom into the area since it passes right up through Melleray which is only out the road from us here.”

The coffee shop was initially opened by Esther Barron in 1980 (then known as Saddlers Teashop) and was extended “about six years ago”, according to Aoife, before Emma, appearing to take a telepathic cue from her partner, continued.

Aoife then took up the baton, telling me: “And then we have a lot of traditional, older cakes as well that you mightn’t get in every bakery like the Battenberg and Chester Cake, cakes that remind a lot of customers of their childhood so there’s a novelty factor in terms of what we do here too. A lot of the produce we use is local – all our eggs are from Early Bird Eggs, we used McGrath’s Butchers in Lismore for our meat, Joe Condon who is only up the road we use for our burgers, Knockanore Cheese too, Baldwin’s Ice Cream as well, which was a big hit during the summer – we’re supporting local businesses and they’re supporting us in return.”

When asked if either felt that Cappoquin has suffered somewhat from not having political representation in any local chamber or beyond, Aoife replied: “There are things which you need support and back-up for in terms of getting bigger proposals followed through and delivered on.”

Emma added: “I think having a Councillor here would definitely be a good driving factor alright. It’d be a help. We have a Community Council here at the moment and they’re doing great work. They’re responsible for restoring the corner building (opposite Blackwater House) just up from us here which was only done this summer and they’re going to do the same for the Blackwater too.”

Aoife politely interjected: “They (the Regeneration Company) also built the new Community Centre, where there’s a fabulous crèche and a gym and there’s been several successful and really well supported concerts held there in the last few years, Nathan Carter (who drew a crowd in excess of 600), Mario Rosenstock and so on – with Christy Moore coming here (on September 27), all of which is bringing people back into the town. People are travelling to Cappoquin from miles around and over county boundaries even, which is fantastic.”

Emma also hailed the efforts of Cappoquin Tidy Towns, which is chaired by Betty Kelleher (from the local Super Valu store).

“It all helps, and they’ve done huge work in terms of how the town is presented and Betty is brilliant in terms of driving things on. She’s regularly out there on The Square and has drummed up a huge level of support and the community has weighed in behind Betty and her community. A park area down by the river had been done up and that’s all been driven by the community and there’s talk of a Blueway at some stage along the Blackwater which would be a great step forward too.”

Aoife said that Cappoquin has even benefited from the Greenway tourism boost. “People who are visiting the Greenway are also visiting Lismore Castle and Cappoquin House and Gardens (an underrated gem I also took in during my visit). Cycling numbers through Cappoquin have definitely increased and of course we’ve got cyclists coming into us from Cork who regularly stop here as part of their regular route so passing trade is good. Of course you’d always like more but all in all, it’s been a pretty good summer.”

To their credit, both Emma and Aoife weren’t for dwelling when it came to what Cappoquin didn’t have or what it might benefit from.

As active economic players in the town, they’re in a far better position to assess the lie of the land than an occasional, albeit enthusiastic, visitor such as myself.

Said Emma: “There is huge work going on in the background here, and it’s all been driven by the community. A good community spirit and a sense of being in something together, of being part of a team, well that can only serve the town well in the long run. And hopefully that’ll keep going.” Amen to that, Emma. 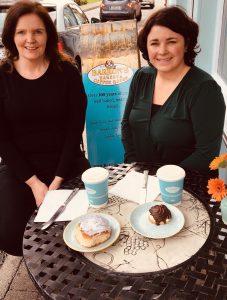 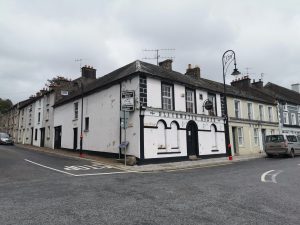 The Cappoquin Regeneration Company has submitted a planning application to convert Blackwater House into new office space in the heart of the town. 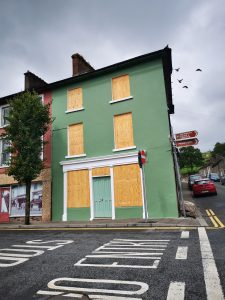 Sign of the times: a renovated building on the corner of Castle Street and Main Street in Cappoquin 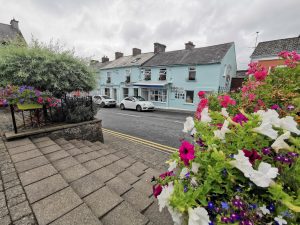 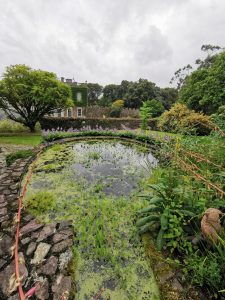 The splendid Cappoquin House and Gardens are well worth a visit.