THE temporary removal of the popular ‘Vadrafjordr’ longboat from its well-established perch outside Reginald’s Tower last week led to a flurry of criticism and concern on social media regarding the vessel’s future.

However, in a bid to allay the fears expressed by the ship’s many admirers, the Viking Triangle Heritage Trust has clarified the circumstances of both the ship’s removal and its return.

Speaking to the Waterford News & Star, Trust Chairperson Brian Magee stated that Mount Congreve Gardens assumed planting responsibility for the area around the longboat at the head of the summer.

“Part of that arrangement involved the boat being sent out to Mount Congreve on a very short term basis, for their Maritime Day (held on Saturday last) given that the Vikings first landed at Woodstown, a short distance from Mount Congreve. The other thing is that we had to do essential maintenance on the boat in terms of oiling it along with other repairs and we can’t do that on the ground in and around The Reg and Reginald’s Tower given how busy a spot it is in terms of footfall so Mount Congreve was also a safer location to undertake these works.”

Brian confirmed that a “temporary oiling job” had been carried out earlier this summer “to tie it through the busier season but a proper job will now be done while it’s out in Mount Congreve and then it will come back into its home after that.”

When asked how long the vessel will be out of its traditional slot, Mr Magee replied: “Originally the plan was that it would be back in before Halloween time… I suppose we’re looking at a few weeks. The tourist season is winding down now, so we felt this was a good time to get these works done and then have it back in position in plenty of time for Winterval and other events coming down the line.”

When put to him that the temporary move could have been communicated with greater clarity than that achieved by the Trust on its own Facebook page on Wednesday last, Brian Magee conceded: “Sometimes it can be very difficult to get the message out and there are always lessons to be learned when it comes to something like this.”

City and County Mayor John Pratt said that he and several Councillors had received many queries from the public following the ship’s removal.

“There was a huge reaction right across Waterford,” said the Mayor, “and the fact that it was missed so quickly only goes to show that installing the boat there in the first place was clearly a good decision and one that’s created the desired impact”.

Reacting to the boat’s temporary relocation, People Before Profit’s Waterford branch called not only for its immediate return, but for the full excavation of the Viking site at Woodstown, discovered back in 2004.

A PBP spokesperson said that the Woodstown site’s full resolution should entail the creation of a replica Viking village and ship at the location, thus creating “a massive tourist attraction for Waterford and the region”.

The ‘Vadrafjordr’, which was launched in Waterford on November 25, 2012, was modelled on one of the acclaimed Viking ships discovered at Roskilde in Denmark. 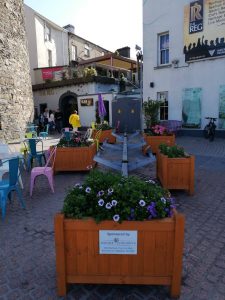