IT was with deep sadness that the Waterford News & Star learned of the death of long-standing contributor Patrick ‘Paddy’ Lowe, who passed away on Sunday last, September 1. He was 82 years old.

Paddy, late of South Parade, Waterford, remained wholly committed to this newspaper right up to Friday last, when his submission for our Christmas Annual was handed into our Gladstone Street office by his wife Mary.

In fact it was the last official business that Paddy tended to at his home last week, when the photos he wished to include with the article, finalised on Thursday night last, August 29, were filed into another meticulously prepared envelope.

In his absence, the final fruits of Paddy’s storytelling labour will be read with additional poignancy come November’s publication, underlining his willing spirit and admirable commitment to the printed word. Indeed, every word he scripted for this newspaper was written by hand and in pencil, each submitted sheet of paper representing “a piece of Waterford history” as Circulation Manager Nicky Heffernan aptly put it.

De La Salle educated, Paddy was proud of his deadline-meeting promptness and revelled in the assembly of his festive specials. Many of his stories reflected on his childhood on The Glen and Ballybricken, during which he performed altar serving duties in The Dominicans (St Saviour’s, Bridge Street).

The faces and places of Waterford city in the 1940s and 50s were of particular interest to Paddy, with that era featuring in many of his seasonal contributions.

As his family told us on Monday: “He just loved it. It was never a chore in any way to him. People would meet him in town and out in Tramore and tell him how much they loved the stories he wrote and the bygone times his stories recalled for them. He drew great pleasure from people commenting like that and we were so proud of him for doing it for as long as he did, to be able to contribute to his local community the way he did, all the way up to last Thursday night when he was writing his final article into the paper. Paddy was a storyteller, be it written or verbal. No matter where he was, he could hold court and tell a story. He loved Waterford, he had so many fond memories of the city and he loved telling stories in the News & Star. It meant so much to him. It was always an honour as far as he was concerned and that he contributed to the forthcoming annual before he passed away was a mark of his dedication to the newspaper.”

Mary Frances Ryan, Editor, Waterford News & Star, described Paddy as a stalwart and talented contributor of the Christmas Annual publication. “I always looked forward to a jovial Paddy coming into the office, on his electric bicycle in more recent years. This year we had to set the deadline that little bit earlier due to a change in our publication deadlines and Paddy, as ever, immediately set to work on his latest story with vim. His handwritten words over the years brought vividly to life a Waterford of a bygone era, of games played on the street and innocent times, the best of neighbours and community in The Glen area of the city where he grew up, Mount Sion School and the Catholic Church of his boyhood days, Waterford’s once vibrant pig industry, politics in the time of De Valera, pye radios and the early days of Radio Éireann, and so much more besides. Paddy took his role seriously and his eloquent words will now form part of the tapestry and rich history of the Waterford News & Star. Our publication was very much the better for his hugely valued contribution.”

The management and staff of the Waterford News & Star would like to offer sincere sympathies to Paddy’s wife and family on their loss and to thank Paddy for his unflinching commitment and unbridled enthusiasm in telling stories so well in our pages every Christmas for so many memorable years. May he rest in peace. 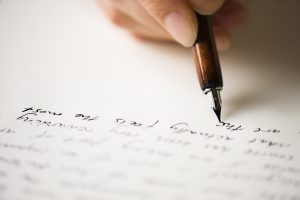