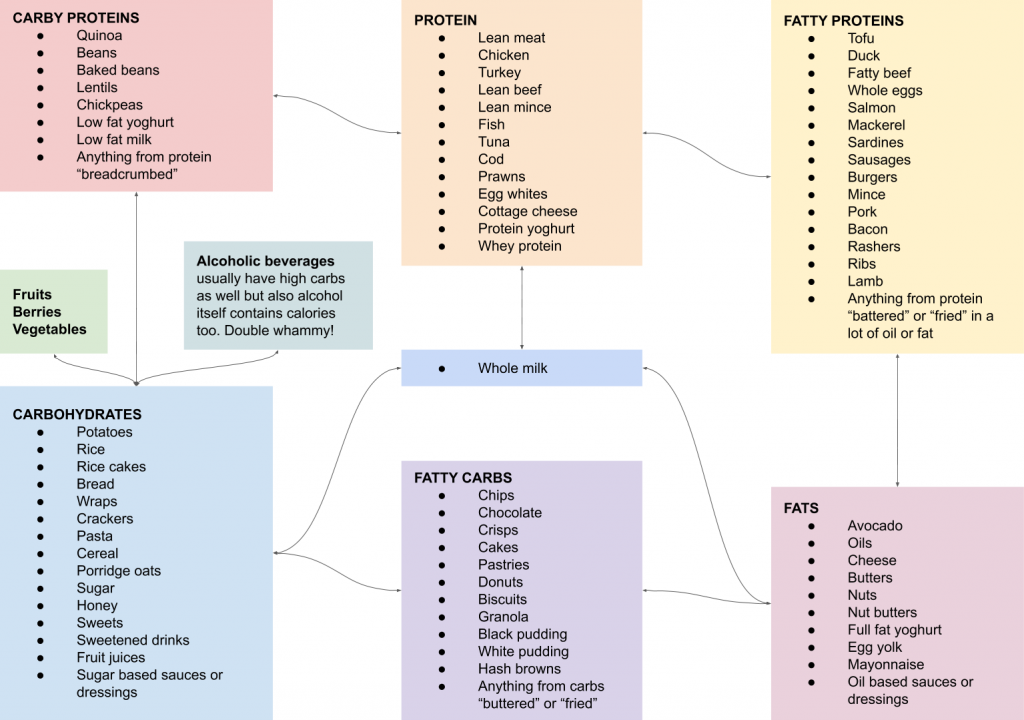 HI folks! Adam this week talking about nutrition again. I keep coming back to it because I’ve been a fitness instructor for almost 10 years now, making me a bit of an older person in a young person’s game (can we say “experienced” instead of “older”? “Vintage” maybe?), and in that time I don’t remember ever coming across someone that asked for my help with exercise that also had their nutrition nailed down from the beginning. Macronutrients and food groups are second only to calories when it comes to nutrition, so let’s talk about them!

A couple of weeks ago I talked about a pyramid listing the importance of certain things when it comes to nutrition. Its base was Energy Balance (calories in vs calories needed). But the second most important layer was macronutrients (or macros). Macronutrients are the kind of major categories food and drink can be broken down into. They are protein, carbohydrates and fats (and depending on who you ask, alcohol). They all have different roles and are important in their own way. Our bodies need protein from the foods we eat for recovery and to build and maintain bones, muscles and skin. Carbohydrates are all about energy. Fats help your body absorb some nutrients, produce important hormones and support cell growth. Not having enough of any one can result in health issues. Luckily there are loads of sources for each.

So what’s with the complicated chart?

When I coach nutrition I usually end up advising certain numbers of portions of each macro (not alcohol, haha) per day. The problem is… not everyone knows where to get them. And some foods can be a little annoying and straddle between two! So that’s what the complicated chart is about. If my clients don’t know what food contains what macro (until they learn of course) then there’s a good chance some of you folks don’t either and I wanted to help.

Now, this chart is by no means exhaustive and if you look hard enough you’ll find versions of food listed here that could go in other spaces (some vegan sausages for example are a great source of protein, but contain a fair whack of carbs too, as opposed to animal based sausages which tend to be protein and fat). I tried to create a list that contained foods real people eat (for example sausages, black pudding and hash browns for breakfast… not just avocado, poached eggs and ezekiel bread). If you’d like to get a hold of a digital version message me on social media @AdamWrightPT on Instagram or Facebook and I’ll send you one.

Why separate out fruits and veggies?

Macros are different, but not completely unrelated, to the older idea of food groups (grains and starches, fruits and veggies, animal and dairy products, oils and confectionary). They are more useful in almost every way when it comes to coaching nutrition except that fruits and vegetables are in the same section as bread, potatoes, pasta, cereal and sweets. And if I advise someone that they have ten portions of carbs for the day sometimes people think fruit and veg can be a “waste” of carbs if they could be having bread or sweets instead. So I’ve stuck them in a separate box here even though they’re the same macro. The vitamins and minerals in fruits and veg (micronutrients) are too important for health, to skip out on so you can have extra toast. So instead of ten portions of carbs I might advise five portions of carbs and five portions of fruit and veg.

And what about alcohol?

Protein and carbs contain four calories per gram. Fat contains nine. Alcohol contains seven… it’s different to the others, that’s why alcoholic beverages are out on their own. But most alcoholic drinks also contains a non-trivial amount of carbs or sugars and must be counted as such. They’re “empty calories” in that they contain no real nutritional value, but they still count when it comes to weight management. When coaching I advise counting drinks as portions of carbs… if you have portions to spare then enjoy your drinks… if having drinks takes you over your portion limit don’t expect to be losing weight if that’s your goal. It’s not fair, but neither is the fact I have to eat vegetables instead of bread, we all have to make sacrifices somewhere.

And whole milk covers everything. I’ve heard it described as the perfect mix of macros, not surprising when you consider the main reason it exists.

So yeah, I thought the chart might be useful for some of you. If you have questions or comments, hit me up on Facebook or Instagram @AdamWrightPT or come down and see me at the Kingfisher Club on the Tramore Road. Our classes are going great and are about to get a whole lot busier once September hits, there’s something there for everyone. Come see Jacqui or myself or any of our other great instructors. You can find the timetable at waterford.kingfisherclub.com as well as more information on the facilities and services we provide. Have a great week!